Bank loan write-offs and bank frauds continue to mount at an unprecedented rate under the BJP regime in the last eight years. Public Sector Banks (PSBs) which were in good financial health till 2014, started hitting the floor since the start of the Modi regime. This is also the time when corporate defaulters were given the freedom to regularly flee from the country with unpaid debts amounting to millions of rupees. Rishi Agarwal was the latest prominent name who left the shores with a whopping debt of Rs. 24,000 Crore! His promoted company – ABG Shipyard – has featured prominently amongst the list of willful defaulters. However, what bothers the government though, is the expenditure on welfare schemes meant for the poor. The PM who is noticeably silent on these absconders, is concerned about the amount spent on subsidies. Using his profound rhetorical skills of twisting the truth, he has recently termed the subsidies as ‘Revadies’ (sugar coated sweets). The Prime Minister of a country like India where billions of poor strive to survive, takes the liberty to insult its citizens for availing their rights of social welfare. The fact of the matter though, is that the expenditure on welfare schemes as a percentage of GDP is dwindling, whereas write-offs and bank frauds continue to rise to astonishing levels. BJP’s IT cell and the RSS foot soldiers are deployed to work overtime to keep the communal atmosphere charged up providing political cover to the beneficiaries of this bank loot and the crony corporates of the Modi regime.

As per The Hindu, the total write-offs amounted to almost Rs. 10 lakh crore in the last five financial years under Modi regime. Whereas, the loan write-offs in the last six years of UPA regime (2008-14) was Rs. 32,000 crores (New Indian Express, January 11th, 2021).  The comparison shown below makes it clear about the way in which the country has progressed under the Modi regime.

The year wise break-up of write-offs under Modi regime is given in Table 1. 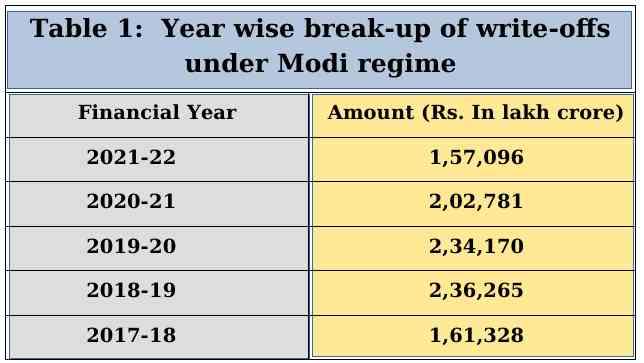 Similar to bank write-offs, bank frauds have been mounting at a rapid rate after this government has assumed power in 2014. As per India Today, RBI numbers entail that the country is losing a whopping Rs. 100 Crore each day on an average since 2014.  In the financial year of 2020-21, banking frauds syphoned off Rs. 1.38 lakh crores. During this period, the recoveries were a little over Rs. 1,000 crore. This was less than one per cent of the outflow. (India Today, 15 December, 2021).

The BJP government argues that most of the write-offs and bank frauds have occurred on loans granted during the Congress regime. Let us look at the reality of this claim.

In order to write-off any bank loan, the financial asset in bankers’ book has to be first classified as ‘Non-Performing Assets’ (NPAs). An NPA is any loan or advance taken from a bank on which interest and/or principal has remained overdue for 90 days from the date of payment of instalment.

This would mean that all the advances and loans which have been written-off now must have remained overdue for 90 days under the present regime. Even if one considers that the loans were granted before 2014, the question arises as to why those who were earlier paying instalments regularly began to default during the Modi regime. Why have defaults started happening at a relatively rapid pace under the present regime? Is it because of the impunity granted to defaulters? The Modi government, however, argues that early recognition of sub-standard financial assets of banks by them brought to surface the problem of NPAs. Even if one concedes to this argument, which goes against the very definition of NPAs stated above, the question arises as to what the BJP Government did after 2014 to recover these sub-standard assets. What is the recovery rate and mechanism put in place to settle these loans and what is its success?

During the initial years of the Modi regime, the government established the Insolvency Bankruptcy Court (IBC) and National Company Law Tribunal (NCLT) with the stated objective of settlement of NPAs of banks. IBC defines the process and NCLT is the institutional mechanism through which settlement process is carried out. This was with the stated intent to clear the balance sheets of banks for achieving financial soundness.

What actually happened in the process was bank write-offs were made possible at amazing speeds with very low recovery rates. The defaulters also didn’t face any criminal procedure.  Their balance sheet got ‘cleaned’ at the expense of ordinary depositors of banks who are being made to bear the cost of ‘hair-cuts’ (reduction applied to the value of an asset) extended to defaulters in return of ‘timely settlement’ of debts.

As of March 2022, the amount of debt resolved through the IBC stands at Rs. 6.85 lakh crores, and the creditors have realized around Rs. 2.25 lakh crores (Business Standard, May 9th, 2022). This is less than one-third the amount admitted for settlement of debts under the IBC process. This number also doesn’t give a true picture as this figure of one-third falls to less than one-fourth as soon as few large settlements are taken away. Of the 4,451 cases admitted under the IBC process, 396 were resolved, 1,349 were liquidated, 1,114 were closed or withdrawn, and 1,682 are still pending.

The sheer scale of liquidation shows that the stated purpose of reviving sick companies has not been met. Corporates have defaulted on debts and liquidated their companies after enjoying substantial hair-cut. The burden of which is not only borne by ordinary depositors as stated above, but also by public exchequer since Rs. 3.10 lakh crore has been allocated for recapitalization of PSBs for carrying out this process of ‘cleaning the balance-sheet’. The ultimate financial burden of this has fallen on the public exchequer.

Supporters of the present government claim that the government’s strategy of early recognition, resolution, recapitalisation and reforms have brought down the problem of NPAs of late. The Gross NPAs as a percentage of bank advances stood at 4.10 % in 2014 when BJP government assumed power in 2014. It reached the peak of 11.5 % in 2018, but has now come down to 5.97 %. This is shown as a ‘success’ story attributed to earlier recognition of doubtful debts and timely settlements of such debts. But, the pertinent question that is brushed under the carpet is who has borne the burden of the whole process.

It should be pointed out that PSBs had collective loss totaling Rs. 1,64,474 crore from the financial years 2016 to 2019. The Centre, thus, lost out on dividends and tax revenues, which in turn put pressure on government finances at multiple levels. Let us see what happened just one year before the Modi government assumed power. In the financial year 2013-14, the PSBs were running on a gross profit of Rs. 37,393 crore.

In summation, the public money of both the depositors and tax payers has been used to ‘clean’ the balance sheet of PSBs. A staggering amount of credit to corporate defaulters has been written-off. A massive amount of public money has been spent on recapitalization, and to infuse liquidity during the process, the exercise of demonetization was carried out.

At the end of the whole painful exercise, the PSBs are being merged with bigger banks in the name of taking advantage of synergies of process and cutting costs to push profitability up. This is being done with the ultimate objective of pushing privatization. It is pertinent to mention here that the Banking Laws (Amendment) Bill, 2021, has been brought to reduce minimum government holding in the PSBs to 26 % from 51 %.

The need of the hour is to turn around the process of privatization of Public Sector Banks and resisting the loot of public money. A few crony corporates of the present regime must not be allowed to first loot the banks by not paying their debt, and then to be rewarded for this crime by being the owner of the same banks. The banks, when they are owned by the public sector, play an important role such as financial inclusion, development of banking networks in rural hinterland and priority sector lending. These roles will no more be played by banks if they are handed over to profit-seeking private bodies. Corporates have already milked the IBC and NCLT process to get substantial haircuts; it is not difficult to guess as to what will happen to depositor’s money once the banks are owned by the same corporates. Saving PSBs thus, is the struggle to safeguard the hard-earned savings of ordinary people. 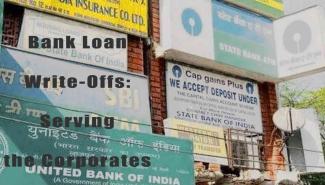