We condemn the vandalisation of MP Asaduddin Owaisi’s home and violent attack on his caretaker by thugs belonging to a violent Hindu-supremacist outfit ‘Hindu Sena’. How could armed thugs feel emboldened enough to march up to an MP’s house and indulge in violence, a mere stone’s throw away from Parliament Street police station and next door to the Election Commission of India? This question demands an answer from the Home Minister of India, Amit Shah, to whom the Delhi Police reports. It is clear that the “Hindu Sena” (Hindu Army) has chosen to target Mr Owaisi because he is Muslim. An MP from the minority community is not safe in his official quarters in India’s capital city Delhi. This is the result of the fact that for the past year the Delhi Police has refused to act against repeated acts of hate-speech and violence against Muslim minorities by BJP leaders; and Hindu-supremacist thugs roam free even after publicly wielding weapons and attempting murder. This was not the first attack on Mr Owaisi’s home; yet the Delhi Police was unable or unwilling to prevent a repeat attack.  We demand a court-monitored investigation to expose the entire network of violent Hindu-supremacist outfits operating in the Delhi-NCR region. 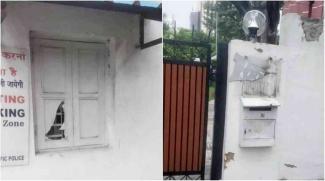 No To Communally Targeted Evictions in Assam,…

Lessons From Bihar: Excerpts from Interviews With…