India’s southern neighbour Sri Lanka is reeling under a terrible economic crisis. The crushing debt burden of this island nation has landed it into an unprecedented chaos marked by skyrocketing prices and massive shortages of basic necessities. The people of Sri Lanka are up in arms and are seeking an end to the reign of the Rajapaksa brothers who have been running the show in Sri Lanka as President and Prime Minister for more than a decade.

In a disturbing pattern, Hindu religious festivals in the past week have been used across India as pretexts to organise menacing armed marches through Muslim localities, raising slogans declaring that only those who acknowledge Hindu supremacy can be allowed to stay in India. First on Ram Navami, and then again on Hanuman Jayanti, RSS-affiliated outfits held processions intended only to humiliate, intimidate and attack Muslims, and vandalise mosques.

Of the five states that went to the polls in February and March, Uttar Pradesh and Punjab grabbed the maximum attention because the elections were being held in the wake of the repeal of the farm laws, and Punjab, Haryana and Western UP constituted the heartland of the historic farmers’ movement that forced Narendra Modi to repeal these laws.

With Assembly elections underway in Uttar Pradesh and four other states, the BJP is desperately looking for ways to sharpen communal polarisation. We saw a hate assembly in Haridwar, camouflaged as Dharm Sansad, issue open calls for genocide. Similar calls were soon echoed in several other public gatherings. Meanwhile, Karnataka, the Southern laboratory of the Sangh-BJP brigade, has discovered a potent weapon in the hijab worn by many Muslim women.

Consolidate the Historic Victory of the Farmers’ Movement!

Strengthen the CPI(ML) to Intensify the Battle against Fascism!

Major questions of history are resolved through people’s struggles on the streets. These words of Comrade Vinod Mishra have once again been proved right in our experience. 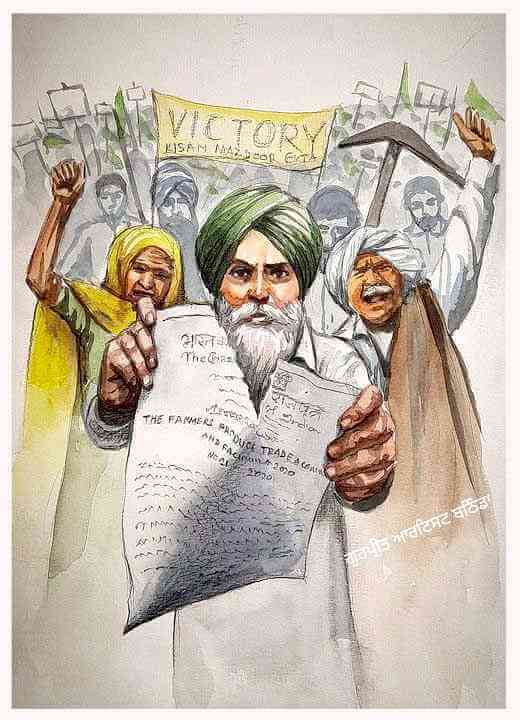 Fourteen months after the Modi government had bulldozed its way in Parliament to convert the widely resented farm ordinances-turned-bills into laws, the Prime Minister had to bow down to the unprecedented farmers’ resistance to announce a repeal of all the three contentious laws.

Towards the First Anniversary of India’s Historic Farmers’ Movement

The historic farmers’ movement will complete one year on 26 November, 2021. In its nearly yearlong existence the movement has demonstrated the amazing potential of people’s power in an extremely adverse situation. Hundreds of farmers’ organisations representing a wide social and ideological spectrum have stuck together with unprecedented unity, indomitable spirit and collective discipline in the face of continuing provocations, demonising propaganda and orchestrated violent attacks.

Modi’s Monetisation Mantra Is A Blow Worse Than Demonetisation

The Modi government is known for its penchant for springing periodic shocks and desperate measures. In economics we have been familiar with the demonetisation disaster and GST, in politics with the sudden stripping of Jammu and Kashmir of its constitutional status and statehood or the passage of the Citizenship Amendment Act or more recently the farms laws. The latest shock inflicted by the government has a strange name – National Monetisation Pipeline or NMP.

Stand with the People of Afghanistan

The exit of American forces from Afghanistan, the concomitant collapse of the US-backed regime headed by Ashraf Ghani and takeover by the Taliban, which should really be called a negotiated transfer of power by the US, have dramatically changed the situation in Afghanistan. With the Taliban attacking a wide spectrum of Afghan people, large numbers of people are desperately trying to flee Afghanistan.

Inflation and Corporate Takeover: An Unfolding…

US elections: Key Takeaways and Opportunities for…