In a disturbing pattern, Hindu religious festivals in the past week have been used across India as pretexts to organise menacing armed marches through Muslim localities, raising slogans declaring that only those who acknowledge Hindu supremacy can be allowed to stay in India. First on Ram Navami, and then again on Hanuman Jayanti, RSS-affiliated outfits held processions intended only to humiliate, intimidate and attack Muslims, and vandalise mosques. These violent processions were met with retaliatory stone-pelting at some places by the minority Muslim community.

In Khargone in BJP-ruled Madhya Pradesh, the day after Ram Navami violence, the state authorities sent bulldozers to bulldoze homes in the affected Muslim locality. While the local authorities claimed that the demolition drive was to remove “encroachments”, the MP Home Minister has declared that bulldozers would always be sent to demolish the homes of “rioters.” The same happened in BJP-ruled Gujarat. Likewise in Roorkee in Uttarakhand, the Hanuman Jayanti processions in three villages raised anti-Muslim slogans including ‘Hindustan mein rahena hai, toh Jai Shri Ram kehna hai” (If you want to live in India you must worship Ram) in front of a mosque. The next day, the police stationed bulldozers in the villages threatening Muslims to surrender or else face demolition of their homes.

In Delhi’s Jehangirpuri, the Municipal Corporation of Delhi controlled by the BJP, in conjunction with the Modi Government’s Delhi Police and the Delhi AAP Government’s Public Works Department and Health Department are carrying out demolitions of Muslim homes and shops close to the mosque which was vandalised by a Hanuman Jayanti procession on 16 April. The demolitions continue in blatant violation of the Supreme Court order staying them.

This template of unconstitutional Hindu-supremacist conduct by police, municipality and other state authorities and is copied from the Yogi Government in UP. During elections Yogi styled himself as “bulldozer baba” who would demolish homes of criminals – and after the elections, police in UP have stationed bulldozers outside homes of Muslim men accused of “raping” Hindu women. Muslim men in a consensual relationships with Hindu women and often accused of rape by the parents of the latter – and are then profiled as rapists by the communal BJP.

In further show of police complicity with violent Hindu supremacists, most arrests in Delhi following violence on Hanuman Jayanti have been of Muslims. The same pattern follows in BJP- and NDA-ruled states.

The fact is that in Opposition-ruled states as well, such as Rajasthan, Jharkhand and West Bengal, Hindu supremacists were allowed to hold the same kind of armed processions and unleash abuse, threats and violence against Muslims. This  led to rioting and retaliatory stone-pelting in some cases. It is unconscionable that even Opposition-ruled states are failing to protect the minority Muslim and Christian communities which continue to await peace and justice in vain. The silence of the Aam Aadmi Party on the Delhi demolitions, for instance, is shameful.

These organised, orchestrated displays of Hindu-supremacist terror have been accompanied by a relentless barrage of Hindu-supremacist diktats and threats: calling for boycotts of Muslim vendors and service-providers; stoking hate against sellers of halal meat; banning the sale and consumption of meat during Navratri; and so on. And they have been followed by a concerted BJP narrative amplified by propaganda media, that Muslims have been the aggressors and “rioters’, not the hapless victims on these occasions. The courts have maintained a troubling silence on the entire spectacle of violence by BJP-patronised gangs and BJP Governments.

While there have been praiseworthy instances of Hindus protecting their Muslim neighbours, the situation calls for more efforts to prevent violence and seek justice. Democratic forces, especially from the majority community, must step up to intensify the fight for peace, dignity, and justice. 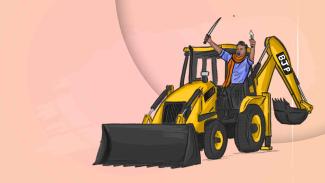