The image of the yellow JCB (the brand is named after Joseph Cyril Bamford, its British founder) bulldozer has become the reigning image of India’s Hindu-supremacist fascism.

BJP leaders including those heading its state governments use “bulldozer” as short hand for razing or threatening to raze down homes and shops belonging to Muslims. The bulldozer was practically an alternate re-election campaign symbol for Yogi Adityanath, the UP Chief Minister who sends these machines to homes of young Muslim men accused of ‘raping’ Hindu women, threatening to raze down their homes if they fail to surrender to the police.

‘Rape’ here is the BJP’s code for love between a Muslim man and a Hindu woman. But note that even if the allegation of rape or any other crime were to have any merit, there is neither any reason not legal basis for the government to threaten to raze down the home of the accused. The aim is to create a spectacle – to humiliate and terrorise Muslims.

Now, over and over again, Hindu festivals are becoming occasions for Hindu-supremacist outfits to attack Muslim homes and mosques. And soon after, state power in the shape of municipal councils declare the homes, shops, and mosques of the affected Muslim communities to be “illegal encroachments” and  send in bulldozers to raze them to the ground. Police forces accompany the bulldozers, attacking and sexually assaulting Muslim men, women, children. “Hit them on their privates” shouted police officers to their force at Khargone, Madhya Pradesh.

The “encroachment” pretext is a thin veil at best – but in any case BJP leaders take the trouble to spell it all out clearly. The Madhya Pradesh Home Minister, for example, stated clearly that “bulldozers will go in wherever rioters live.” While all slum dwellers across religious communities in India know the fear of having their homes razed to clear “illegal encroachment”, the term gains an extra Islamophobic charge when applied to Muslims. Hindu slum-dwellers or farmers can be accused of “illegally encroaching” on government land; but they are never accused of illegally encroaching on India as a country itself as Muslims often are. (Read ‘Dance of Hate At Darrang’, in the October 2021 issue of Liberation for an account of the murderous eviction of Muslims accused of being ‘Bangladeshi infiltrators” encroaching on government land in Assam). The BJP’s favourite  canard against Muslims is that they are not Indian: accusing them of being Bangladeshis encroaching on Indian land follows from this. These days, the new term of othering and abuse for Muslims in India is ‘Rohingya’. This term kills two birds with one stone – it equates the helpless and stateless Rohingya refugees (a few thousands of whom are in India) with terrorists, and equates Indian Muslims with ‘Rohingyas’ who do not belong in India.

The bulldozers razing Muslim homes or shops or mosques; the terror and helplessness of the Muslim community trying to save their meagre belongings – all this is captured and amplified by television cameras by media-persons avid and thirsty for more hate and violence. One anchor for the Hindi TV channel Aaj Tak, Anjana Om Kashyap, was shown live on TV asking a bulldozer for a ride to the spot in Jahangirpuri in Delhi where shops were being demolished. Another anchor, Navika Kumar of Times Now, tweeted "Dramatic increase in demand for bulldozers. Are we increasing domestic capacity for manufacturing or will we have to depend on imports?? #JustAsking" followed by laughing emojis.

The spectacle of the bulldozers reducing Muslim homes, property and places of worship brings to mind the demolition of the 16th century Babri mosque in Ayodhya in 1992. Like the Babri Masjid demolition, the is a staging of fascist terror by India’s ruling BJP against the minority Muslim community – this time on a more sustainable, local scale. Every humble Muslim home, every little local mosque can now become the site for a display of fascist terror.

And to top it all, the Modi regime hosted UK Prime Minister Johnson in India, where he appeared to signal his Government’s approval for the Modi regime’s “bulldozer fascism” by visiting a new JCB factory near Vadodra. Anthony Paul Bamford, one of the directors of the JC Bamford company, is a Tory MP and major funder for the Tory party to which Boris Johnson belongs. 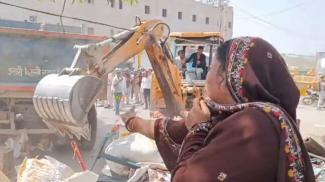