Larsen and Toubro workers in Puducherry are agitating to demand equal wages for equal work and abolition of contract labour system in production. All four units in Puducherry were on total strike since 15 March 2022 for about 22 days.

Larsen and Toubro Ltd has four construction material production units in Puducherry which employs more than 1000 workers in production who are basically disguised contract labourers. In strictly legal terms, they are all regular employees as there are no licensed contractors in production activities and the said workers are employed for more than 5 - 25 years. But in fact their conditions of employment are those of contract employees – in flagrant violations of relevant labour laws. Furthermore, the workers are denied proper wages and are forced to work on a 12-hours shift.

These disguised contract labourers have been demanding equal wages for equal work, double wages for overtime work, proper deduction of ESI & EPF contributions and remittance of the same to the concerned authorities without any default, regularisation of workers who have completed more than 2 years of service, etc., for the last several years and their demands were never heeded by the management.

The non-permanent workers, (contract labourers in other words) formed L&T Jananayaka Thozhilalar Sangam (AICCTU) some four years back and continued to demand statutory rights. The L&T management had not considered the just demands of the workers till now. Finally, the union was forced to issue an indefinite tools-down notice to the management. The indefinite tools down had begun from 15th March and continued till 5th April.

For the first 22 days, it was a stay-in strike which went on till 5th April which was backed by all categories of workers, including 150 regular employees led by other unions.

On 8th July, workers marched to Raj Bhavan demanding immediate lifting of the illegal Lock-out and reinstatement of all workers. The struggle is on. All workers and the union led by AICCTU is determined to carry on the struggle. 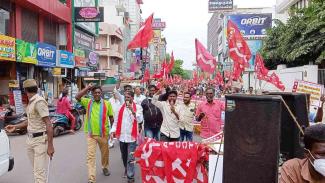