Lebanon has been in the grip of a major economic crisis for more than a year. This has led to inflation of more than 700%, the currency losing 95% of its value, chronic shortages of essentials including food, medicine, fuel and even essential public services like healthcare. How did this happen? How did Lebanon go from being one of the most prosperous countries in West Asia, to one of with such immense crisis? The answer as usual lies with neoliberalism in particular and capitalism in general.

On 9 March 2020, Lebanon’s government announced that it would not be paying $1.2 billion in Eurobond payments, which meant that the country would face the first sovereign default in its history. This was clearly the result of an economic system that prioritized extracting rent-based income rather than the productive sector. Politicians used the financial sector to distribute the public resources among their cronies leading to an extreme concentration of wealth and income among the highest earning sections of the population. Large scale protests had started in the country in 2019 precisely demanding structural reforms to the economy that could prevent such a spectacular economic collapse.

The explosion at Beirut port on 4th August 2020 further hampered any scope of recovery. Caused by the spread of a fire that started at a fireworks warehouse that spread to the warehouse storing the ammonium nitrate deposit, a massive explosion killed over 200 people, causing 7000 injuries and leaving more than 300,000 people homeless. An investigation by Human Rights Watch showed that corruption and government apathy were primary reasons for the storage of such highly volatile substance in such dangerous conditions. The explosion happened on a day when owing to the COVID19 pandemic, the Beirut hospitals were already forced to cope with a patient load far beyond their capacity, when they were suddenly forced to bear with another crisis with thousands of serious injuries. The explosion also destroyed a huge chunk of Beirut port hampering nearly all economic activity.

Disaster capitalism soon swooped in to further exploit the Lebanese crisis with French President Emmanuel Macron leading the charge. He along with a host of international representatives of finance capital promised aid but demanded ‘reforms’ in the economy. This meant that Lebanon was to open up its economy further to the same neoliberal forces that were responsible for the crisis in the first place. Zahra Bazzi and Nizar Hassan have pointed out that the IMF bailouts were more of a lifeline to Lebanon’s corrupt elite that would further pressurize the poor with the burden of a crisis they had no role in generating.

Most recently the dwindling fuel supply has led to long lines at the country’s petrol pumps, which in turn have led to a major political unrest. The Prime Minister designate Saad Hariri was forced to resign due to the turmoil, as the western governments have conditioned any economic aid on ‘reforms’, which are deeply unpopular with the populace. It is important at this moment for global progressive forces step up and call for economic aid to the Lebanese people that is not preconditioned upon their further exploitation. This would go a long way to resolving the crisis and build an alternative vision of internationalism that challenges the exploitative nature of neoliberal globalization. 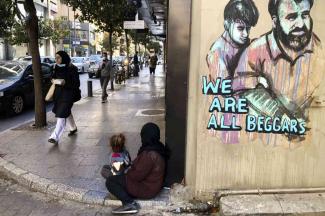