The current Chief Justice of India (CJI), N.V. Ramana, spoke in August this year about the state of human rights in the country and the role that the Supreme Court should play to defend justice. In his speech delivered at the Vigyan Bhawan in Delhi on 8 August, he said that police stations “pose significant threats to human rights and bodily integrity”. Interrogation involving torture and horrific inflection of mental and physical pain, while illegal, is rampant. He also spoke of how the system, in its current state, does not defend rights of undertrials. He pointed that to the great detriment of undertrials, the detained and the arrested are often denied legal representation. The CJI’s statements tell us that the widespread nature of rights abuse in Indian prisons has made it impossible for the forces-that-be to deny its existence.

As human rights defenders, there is a need today to  fight for the rights of undertrials. Today, under the present dispensation, the ‘judicial’ process itself is the punishment. We are seeing multiple instances of laughable and ridiculous charges being foisted on vocal opponents of the ruling regime. These charges are followed by prolonged incarceration of the accused, based on fake or no evidence. In most cases, the accused is finally declared not guilty, after a long stint in jail. This final acquittal, however, can hardly be termed justice. If the Supreme Court is serious about justice, the CJI and their team must ensure the following:

In addition to these procedural reforms, it is important to mention here that the existence of draconian legislations is a major obstacle in the direction of ensuring human rights. It is a blatant violation of justice today that human rights defenders are being detained under UAPA and similar draconian laws. These should be deemed illegal, as they curtail the rights as enshrined under the constitution. Along with the above mentioned reforms in judicial and police procedure, such legislations should go. 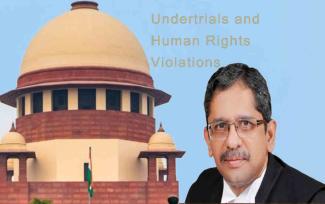