Human Rights Under Fire In India

From the platform of an event marking the 28th Foundation Day of India’s National Human Rights Commission (NHRC) in October, Prime Minister Modi launched a characteristic attack on human rights activists – accusing them of “selectively” raising human rights concerns to “tarnish the nation’s image.” While BJP regimes flout human rights with abandon, Modi’s minions like their master, seek to rewrite human rights theory itself. As Siddharth Varadarajan observes, “What do you do when the practice of government is not in sync with the theory of constitutional governance? You make up a new theory.”

Addressing a new batch of police officers, National Security Advisor Ajit Doval advised that “The new frontiers of war is the civil society which can be manipulated to hurt a nation’s interests.” This is nothing but the “urban Naxal” insinuation coined by the regime’s pet media propagandists, rendered profound. Translated, this means: Anyone seeking to keep the regime accountable to human rights principles is a threat to the nation’s interests. Human rights offenders are the only humans whose lives have value, the ones they torture or kill are “terrorists” who have no human rights. Human rights defenders thus violate the rights of the only humans deserving of rights. Perpetrators of human rights violations are thus victims of “civil society”; victims of human rights violations are terrorists, and those raising human rights concerns and objections are thus “urban terrorists.”

Not to be left behind, Chief of Defense Staff General Bipin Rawat said to an admiring Times Now anchor Rahul Shivshankar, “Kashmiri locals are saying that we will lynch terrorists, they  say they will make arrangements so that terrorists get lynched. This is a positive sign. How can killing a terrorist be a human rights violation? If a terrorist is operating in your area, why won’t you kill him?” Lynching has of course long ago been established as proof of Hindu-supremacist patriotism (when the body of the Dadri lynching perpetrator was draped in the national tricolour by a Union Minister at his funeral). But now we have the chief of defence staff advocating “arranged” lynchings, where the victims are declared terrorists!

What does it mean when Rawat says local Kashmiris “arrange” lynchings – does it mean the actual lynchings are carried out by the police or armed forces? In fact, local Kashmiris are assaulted by forces merely for demanding that the bodies of their kin slain in so-called “encounters”, be handed over to them. At  Hyderpora, police claimed to have killed “two terrorists and two terror associates”. Villagers protested, asserting that at least three of those killed were in fact a local businessman, a dental surgeon, and a peon, murdered in a staged “encounter” and posthumously declared to be “terrorists” and “associates”! The Hyderpora incident is only the latest instance of the Doval-Rawat theory in action. Civilians are killed, and allegations of cold-blooded murder by the police are answered by assigning the identities of “terrorist” and civil society “terrorist associate” to those killed! Forced by protests, the J&K administration ordered a magisterial enquiry into the “encounter” and handed over the bodies of the businessman and the dental surgeon. However, in a reminder that the Hathras-type atrocity of forcible secret midnight burial/cremation is common in Kashmir, the family members were forced to conduct the burial of their loved ones in the darkness of night.

In Kasganj of Uttar Pradesh, a young Muslim man Altaf was accused of abducting a minor Hindu girl. The next morning the Kasganj Police claimed improbably that the Altaf (some 6 feet tall) hung himself from a two-foot high tap in the police station’s washroom, using the “drawstrings of his jacket hood”. It later came out that the woman in question is not a 16-year-old minor but an adult. In India, some 40 per cent of cases of “abduction” and “rape” of girls and women are actually consensual inter-caste or inter-faith elopements which the parents of the girl or woman seek to criminalise as rape. The UP police take their cue in such cases from the Chief Minister himself who terms all inter-faith love to be “love jehad” and calls for the “perpetrators” to be killed.

Tripura witnessed a spate of anti-Muslim violence, including burning of mosques. Tripura police filed UAPA charges against journalists and others tweeting about such violence, especially targeting Muslims for such tweets or posts. Even more outrageously, Tripura police pursued two women journalists across state borders into Assam to arrest them for reporting on the vandalism and arson targeting mosques and Muslim properties. 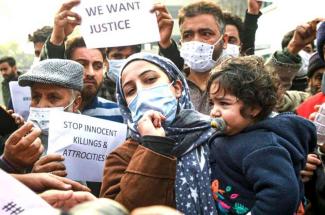