The reports of mass Aadhar collection drives by the Election Commission and mandatory collection of Aadhar numbers during verification processes, in the context of the introduction of Form 6B and the amendment to Form 6 of the Registration of Electors Rules, 1960, which effectively make provision of Aadhar number mandatory for people who are Aadhar card-holders is a matter of serious concern.

Of course, the passage of the Election Laws (Amendment) Act, 2021 enables the linking of electoral roll data with the Aadhar system. At the time of passage, the Stated Objective in the Bill for such linkage was  to curb the menace of multiple enrolment of the same person in different places. It was also assured that the linkage would be purely voluntary (The Economic Times, March 25, 2022). However, the Forms now appear to effectively make the linkage compulsory. This poses grave repercussions for an already fragile electoral democracy.

Over the past several years, rampant errors and discrepancies in Aadhar processes caused by technological failures, biometric changes etc. have resulted in loss of welfare benefits to vulnerable populations across the country. Moreover the genuine concerns around the privacy issues surrounding Aadhar database are yet to be addressed. Just recently, the UIDAI issued a circular asking people to refrain from photocopies of their Aadhaar cards in view of the possibility of misuse of the same, which was subsequently withdrawn (The Economic Times, May 30, 2022). There are grave and legitimate concerns surrounding the misuse of demographic Aadhar data and its impact of the Fundamental Right to Privacy of Aadhar card-holders especially in view of the lack of a Personal Data Protection Law.

Linking of such a defective system to the EPIC-Voter ID system by this authority cannot reasonably be expected to better the electoral roll, and in fact, will likely increase the possibility of external tampering and voter fraud. Not only will there be a likely impact on the sanctity of electoral data, but fraudulent Aadhar accounts may be used to legitimise fraudulent names on the electoral rolls. Hence, such a linkage of Aadhar will be dangerous and will have to be reconsidered.

There are also deep concerns regarding voter profiling that are required to be considered. In Andhra Pradesh, a failure of Aadhar linking resulted in a public dashboard being available online where the homes of 50 lakh plus families could be identified by religion and caste (HuffPost India,  September 11, 2018). Aadhar demographic data includes details of caste, religion, gender, name, family details and other sensitive data, which is crucial in voter profiling. While issues surrounding exclusion of marginalised communities from electoral rolls are well-recorded, a recent report shows as many as 20% voters belong to the Muslim community are missing from electoral rolls in Karnataka (The Scroll, May 10, 2018).

The National Electoral Roll Purification and Authentication Programme (NERPAP) undertaken in 2015 by ECI wherein Aadhar and voter IDs were linked, consequent to which nearly 55 lakh voters in Andhra Pradesh and Telengana were deleted from the electoral roles  (The Wire, February 26, 2019). With wholescale databasing of voter demographic profiles, the democratic processes are themselves imperilled.

Importantly, Section 9 of the Aadhar Act notes that Aadhar is not proof of citizenship, and hence all Aadhar card holders are not voters. Not only this but since the Supreme Court judgment in Justice K.S. Puttaswamy (retd.) & Anr. v. Union Of India limits mandatory use of Aadhaar authentication to welfare programmes and for  income tax purposes, not all voters have Aadhar. Hence, the card-holders of Aadhar and EPIC Voter IDs are entirely different, and no purpose appears to be served by linking the two.

The right to adult suffrage is enshrined in Article 326 of the Constitution. This constitutional right cannot be made subject to willingness to share Aadhar number. Moreover, the impact of Aadhar linkage on free and fair elections in view of apprehensions of voter profiling cannot be overstated.

The CPIML has submitted a memorandum to the ECI demanding an immediate rollback of Aadhar EPIC linkage and Aadhar Collection by the Election Commission as well as repeal of amendments to Form 6 and Form 6B of the Registration of Electors Rules, 1960. 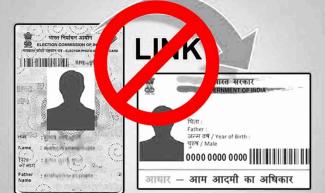