On August 15th – the occasion of the 76th Independence Day – in his speech, Prime Minister Narendra Modi said that ‘we must respect women to develop as a country’ and stressed on the need for women’s empowerment. The Prime Minister also appealed to Indians to change their mind set towards women in everyday life.

On the other hand, in his home state of Gujarat, the ruling party – BJP – was preparing to release 11 prisoners serving sentences in the Godhra Jail who were convicts for life in the Bilkis Bano case as per the State Government's policy of remission.  Upon their release on August 15th, all the 11 convicts were welcomed with garlands, tilak and sweets.

According to reports, all the convicts were taken to the RSS office soon after they got out of jail and were felicitated there.

How did they get released?

The Union Ministry for Home had written a letter to all the states on June 10th, in which it was stated that due on the occasion of the 75th year of Indian Independence, ‘Amrit Mahotsav’, the sentences of convicts in select categories will be waived and will thereafter be released. It was proposed to release the prisoners in three phases – The first on August 15th, 2022, the second on January 26th, 2023 and the third on August 15th, 2023.

The categories which will not receive exemptions were also mention in the letter issued by the Union Home Ministry. This included those convicted of rape and those serving life sentences. However, the administration says that all these prisoners have been released under the Remission Policy of 1992.

Gujarat's Additional Chief Secretary (Home) Raj Kumar told The Indian Express that on the application for remission of sentence due to 'completion of 14 years' in jail and factors like 'age, nature of offence, behaviour in jail', etc., are considered.

In this case, 5 out of the 10 members of the advisory committee were associated with the ruling Bharatiya Janata Party (BJP), who supported the release of these convicts. CK Raulji, a member of this government committee and BJP MLA from Godhra, supported the culprits and said that some of the convicts in the case are 'Brahmins', who have good 'sanskar'.

The Supreme Court in an array of cases has elicited its opinion on the policy of remission by states.

The Supreme Court, in State of Haryana v. Mohinder Singh, held that the grant of remission should be ‘informed, fair and reasonable’.

Also, the Supreme Court in Laxman Naskar v. Union of India, said that the state needs to pay attention to few aspects before releasing any convict, which includes whether the offence committed was an individual act of crime that does not affect society, whether the crime is likely to be repeated in future by the convict, and whether the offender has lost the ability to commit a crime.

If we look at the facts, then the incident of rape and brutality was carried out against Bilkis Bano during the violence across the entire State of Gujarat.

After the release of these convicts, Bilkis has made a public statement that her personal security is under threat. At the same time, we see that Hindutva organizations like the RSS and Vishwa Hindu Parishad, who brazenly commit continuous violence and spew hatred against the Muslim community, have welcomed these culprits with open arms.

What did Bilkis Say?

After the news of the convicts being released came out, the 20-year-old wounds from the Gujarat riots were revived for Bilkis who survived the horrors of the communal violence. She said, “I had trusted the highest courts of my country. I had trusted the system and I was slowly learning to live with my misery. The release of these convicts has taken away my peace and also shaken my faith in availing justice. This sorrow and loss of faith is not only for myself, but for every woman who is fighting for justice in courts.”

Many a times, the oppressed sections of our society, namely the Muslims, Dalits, Bahujans and Adivasis, have to face several struggles to achieve justice and such instances render the seek for justice hopeless as can be illustrated by what Bilkis has expressed.

We have seen that activists and journalists who fought for justice for the victims and survivors of the Gujarat riots and other cases are being put behind the bars. The Supreme Court on June 24th this year,  dismissed a petition against the SIT report giving clean chit to the then Chief Minister Narendra Modi in the 2002 Gujarat pogrom case. This petition was filed by Zakia Jafri, whose husband was killed by a Hindu mob during the riots. The Supreme Court while dismissing the petition stated that it found no merit in Zakia's petition, and observed that activist Teesta Setalvad, who was also the co-petitioner in the case, “deliberately played with the sentiments” of Zakia Jafri. The court had asked for an inquiry into the role of Teesta, and soon after, Teesta was arrested by the ATS Squad of Gujarat.

It is not only Teesta who is being incarcerated for standing with the victims and survivors of the Gujarat pogrom, but others such as former IPS officer Sanjeev Bhatt and DGP RB Sreekumar have also been arrested and put behind bars. The Ahmedabad Crime Branch arrested Sanjeev Bhatt on an FIR accusing him, Teesta and Sreekumar of fabricating evidence of conspiracy behind the 2002 Gujarat riots and to falsely implicate certain persons, including the then chief minister Narendra Modi.

We have been witnessing increasing violence against the Muslim community and on the other hand, that those committing crimes against Muslims are provided with immunity under the current regime. Union Minister Mahesh Sharma of BJP paid tribute to the killers of Mohammed Akhlaq, who was lynched in Dadri, UP, by draping them with the tiranga. After the gang-rape of a seven-year-old Zainab Ansari in Kashmir, a ‘tiranga yatra’ was taken out by the BJP. Muslim women were auctioned on websites like ‘Sulli Deals’ and ‘Bulli Deals’ with impunity. ‘Mahant’ Bajrangi Muni openly issued rape threats against Muslim women.

Under the far-right Modi regime, communal violence and impunity has become the norm. 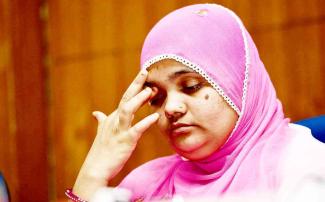