Nirmala Rajasingam is an organiser with the Movement for People’s Struggle Sri Lanka (UK) which has been organising protests in London in solidarity with the Sri Lankan people, and a long-term activist with South Asia Solidarity Group.

Can you give a very brief overview of the economic crisis in Sri Lanka, its causes and the kinds of effects it has had on different sections of working people?

The Sri Lankan Government declared the country bankrupt in April 2022, and defaulted on its external debt payments as it ran out of dollar reserves. The acute  shortage of food, fuel and medicines brought the desperate Sri Lankan people to the streets in their millions and they drove the President Gotabaya Rajapakse and Prime Minister Mahinda Rajapakse from office.   There is no abatement of miles-long fuel queues; prices of food items have tripled and quadrupled.  Unprecedented levels of starvation and malnutrition are beginning to be experienced by the people.  According to UN agencies 6 million people are already starving; 40,000 people are receiving saline daily from hospitals because of malnutrition.  Millions more will join their ranks as prices are set to soar even further as food inflation, which is at 90% already, will increase.

The Rajapakse dynastic regime’s profligacy, corruption and mismanagement of the economy are what precipitated this economic collapse, but this is a story that has evolved over four decades when Sri Lanka became the first South Asian nation to liberalise trade and open up the economy to foreign direct investment. The pursuit of  neo-liberal economic reforms increased indebtedness, and encouraged neglect of domestic production in agriculture, fisheries and the plantation sector, eventually nearly doubling imports over exports, creating a balance of payments crisis. Under the Rajapakses, Sri Lanka went on a borrowing spree, incurring sovereign bond debts on the global financial markets. The borrowings were to fund large infrastructure and vanity projects that returned no dividends for the people. While Sri Lanka owes 10 % of its debts each to China, India and Japan, 47% of its debts are to private creditors in the global financial markets. An IMF bail-out is perceived by liberal economists as the only solution to deal with the $55 billion debt.  The IMF’s sole concern is debt sustainability, and debt-restructuring in the interests of Sri Lanka’s private creditors.  Under a staff level agreement, the IMF is offering a meagre 2.9 billion dollars over the next 48 months starting from 2023, to render Sri Lanka credit worthy. In order to attract this agreement, a tough regime of austerity, deepening privatisation and selling off of public assets has already begun.  Sri Lanka now will have no option but to borrow more from the international financial markets which will keep the debt cycle rolling and indebtedness growing. The working people who are largely reliant on the informal economy, are now unable to earn an income as the economy is fast shrinking, an effect of austerity.  Many have lost their jobs already and small businesses are shutting down.  Civic life has slowed down drastically with schools and offices functioning for far fewer days or not at all, because of lack of transport and fuel.  Farmers experiencing bankruptcy due to the sudden fertiliser ban, may never return to farming.  Many working in the plantation sector and other informal economies are fast migrating out, in search of unsafe, precarious, and low-waged jobs abroad.

What has been happening since the government forces attacked the massive Gota Go Gama protests? Are the arrests and repression continuing?

A new wave of repression hit the protest movement from the very first day Ranil Wickremesinghe became President. A brutal assault on 22 July was followed by bringing in emergency powers which facilitate arbitrary arrests. The dreaded Prevention of Terrorism Act is now being used against lead activists of this peaceful, non-violent protest movement.  Left activists, students, trade unionists, human rights defenders, journalists, community leaders and progressive clergy are being hunted down daily, with numbers of arrests varying from two to fifty and hundred. Many have been abducted, interrogated and then thrown out of vans. Since the May 9th attack by security forces on the Galle Face GotaGoGama site, over 3500 persons have been arrested and over 1200 persons are still in custody.  At present the possible enactment of a ‘National Security Act’ is on the cards, which will be a permanent statute unlike the emergency regulations.

How is the movement dealing with these new challenges and what are the main demands being made?

All indications are that the GotaGoGama protest phase is now complete, and the movement will journey to a new phase and expand countrywide.  Satyagraha style sit-ins, smaller marches and spontaneous protests are still happening in the capital and regional  towns demanding the release of remanded protestors.

The protest movement’s composition was politically very eclectic until now, with even centrist, urban middle and upper middle classes joining in, to oust the Rajapakses. When Wickremesinghe took office these forces left the scene saying that he has to be given a chance. There are two main parties of the left, the Janatha Vimukthi Peramuna (JVP) and the Frontline Socialist Party (FSP). The JVP, which now has three members in parliament, is focused on winning the next elections, as both majoritarian parties that have alternately governed are thoroughly discredited.  But this is no easy matter. The JVP has moved significantly to the right, seeking to be perceived as a viable electoral force, and has not sufficiently dealt with its past in terms of its ethno-nationalist biases, and has moved away from a transformative agenda for the country. The FSP is increasingly being identified as the force behind this ‘Aragalaya-Poraattam- the Struggle’, but trade unions, civil society activists, and various social movements also are very much the backbone of this movement.

When the protest movement demanded a ‘system change’, abolishing the Executive Presidency was seen as an urgent and essential first step along with the release of all protestors and political prisoners.   The Executive Presidency with excessive powers, introduced in 1978 to push through neo-liberal economic reforms, has wreaked havoc on the political landscape of Sri Lanka by degrading parliament, politicising the judiciary and all administrative structures, and militarising the country to prosecute the war against the minorities, which have all led to the crowning of an authoritarian regime. The repeal of the Prevention of Terrorism Act is also high on the list of demands, along with immediate economic relief for the people.

What do you think are the next steps for the movement to succeed and do you think it's likely they will be able to?

Parliament is increasingly seen as a self-indulgent body, largely irrelevant to the deteriorating lives of the people.  The Government has not taken any steps to organise economic relief, or distribute food and essentials since the crisis began.  People see politicians only jockeying for power and horse trading in parliament.

The protest movement is envisaging new structures of ‘People’s Power’ beyond parliament, and are calling for People’s Councils, which maybe local, regional and national.  When the crisis hit and parliament was unprepared, the people marched to the capital, and put forward the radical demand that they are the true repositories of the nation’s sovereignty, and not the corrupt rulers, and demanded the resignation of the Rajapakses.  Work has begun amidst this repression to discuss the shape and parameters of People’s Councils, and some are already being set up.  People’s Councils can discuss national issues such as a new constitution, the economy, development, devolution, the environment, but also discuss local issues of development, challenge local hegemonies of ethnicity, caste, class and gender, and resolve conflicts between peoples.

How is the majoritarianism of the ruling elite being addressed, how are these questions discussed and what kinds of changes have come about among people from the majority community in how they understand them, as a result of the movement?

For the first time, an open discussion about the character of the ethno- nationalist state, and majoritarianism, have been put on the agenda openly, in the (Sinhala majority) South. Earlier it was the preserve of small progressive circles. For the first time, the 1983 pogroms against the Tamils, and the end of the civil war in Mullivaikkal in 2009 were commemorated publicly, in the South, by the protest movement, at Galle Face.  This is only an opening. But unlike before, significant numbers of Tamils and Muslims living in the East, Hill Country and the South are participating in these discussions. These discussions will definitely be taken forward in the People’s Councils.

What role are the Indian government and Indian corporates playing, and what kinds of solidarity needs to be built between progressive forces in the two countries?

It is often said that Sri Lanka is not just caught in a debt trap, but also a geo-political trap between its powerful neighbours, India and China.  In recent months India has extended much-needed help in the form of credit lines, obviously in order to reduce Sri Lanka’s dependence on China, so that Sri Lanka now owes more to India than China.  India is recognised by the US and other western nations as the pre-eminent regional power in the sub-continent and as such has always had a say on how Sri Lanka’s geo-political interests are shaped, especially vis-à-vis China. When the Rajapakse regime got very close to China, received assistance for mega infrastructure projects, defaulted on debt repayments and was forced to cede territory on long lease, India and the west began to be perturbed by China’s growing influence over Sri Lanka. India is Sri Lanka’s largest trading partner, and has always tried to ensure that it does not stray of its sphere of inflence.  India’s anger over the docking of the Chinese ‘spyship’ at Hambantota port is a case in point. Sri Lanka cannot do without the assistance of either country, such is its dire need.

India has invested heavily in real estate, oil and coal refinement, and is probably biggest supplier of food items to Sri Lanka. India has in 2021 pressurised Sri Lanka to hand over a lease of an international container terminal at Colombo Port to Adani, and a few months ago, while Sri Lanka is in the middle of a fuel supply crisis, Modi himself had forced the hand of the then president, Gotabaya Rajapakse, to give a contract for the development of ‘green energy’ in Sri Lanka to Adani. Meanwhile India which has in the past protected Sri Lanka at the Human Rights Council sessions, has this time made critical comments.  This is all part of a broader plan to hold Sri Lanka to account over its relationship with China, by India and the western nations. Also, India wants a politically stable Sri Lanka, so long term protests and a movement for a ‘system change’ will not be looked on kindly by India. In terms of solidarity, the Indian left is facing many similar challenges to those faced in Sri Lanka – including around resisting ethno-nationalism and majoritarianism - and building and deepening links of solidarity is very much needed by Sri Lankan progressive forces. 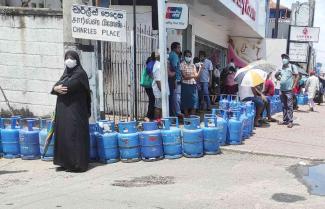