Just when Gautam Adani has become the second richest man in the world with the most generous backing of the Modi regime and India's crony capitalism is becoming an unbearable burden on the public exchequer with massive loan write-offs and tax exemptions and reductions, Narendra Modi has launched a verbal war on what he calls 'revdi culture'. The phrase is used to ridicule subsidies and welfare schemes demanded by the deprived people and promises of free or subsidised distribution of goods and services being made by rival parties, calling it the biggest drag on the Indian economy. A BJP leader has gone to the Supreme Court seeking a stop to such so-called freebies and nudged by the Supreme Court, the Election Commission has now proposed an amendment to the model poll code of conduct to censor election manifestos of political parties (CPIML's response to the amendment proposal is carried separately in this issue of Liberation). If the term freebie has to be used meaningfully, it deserves to be applied first of all for the obscene concessions being extended to the big corporates and the super rich. But concessions given to the rich are called incentives while relief provided to the poor and the needy is termed freebies or revdi!

In fact, the BJP under Modi has been the classic case of the most cynical use of the so-called ‘revadi' strategy. Most of its promises have of course been exposed to be empty rhetoric and plain lies or joomla. Now in power, the government seeks to arrogate to itself the exclusive advantage of making pre-poll announcements about the launch of new schemes and projects or distributing some relief in the form of token transfers of so-called benefits. The launch of the Kisan Samman Nidhi scheme promising an annual relief of Rs 6000 to some 11 crore small and marginal farmer households before the 2019 elections was a glaring case in point. This is done tactically just on the eve of elections before the schedules are announced and the 'code of conduct' restrictions kick in. If rival parties can now be stopped through the amended model code from making competitive announcements in their election manifestos, they will be put to a permanent disadvantage.

The revadi bogey is being raised precisely when farmers across the country are demanding a legal guarantee for MSP for all crops, employees are demanding restoration of the Old Pension Scheme in place of the fraudulent scheme of loot disguised as the New Pension Scheme and workers are opposing the new Labour Codes that are threatening to depress the already low minimum wages to an abysmal floor wage of Rs 178 per day.

It is shameful that the combined social expenditure of Centre and State Governments in India has remained stagnant between 6 to 7 percent of GDP from 2014-15 to 2019-20 (Page 352, Economic Survey 2021-22). To put it in perspective, in EU it is around 22 percent on a pan-European basis with figures for individual countries ranging from 12 to 40 percent. It was only in last two COVID-19 years that social expenditure in India recorded a slight increase  due to one-time expenditure on food security, MNREGA and health. But this was clearly to meet the extraordinary situation and is unlikely to reflect any kind of trend.

It is more than likely that with normal resumption of economic activities, the government will return to its usual mode of austerity for the people, especially in the name of keeping fiscal deficit in check at 3% of GDP as mandated by the Fiscal Responsibility and Budget Management Act.

The talk of pressure of revdi culture on government finances is just an alibi to effect cutbacks in social expenditure and bring it back to the pre-pandemic level. This is happening when India ranks 107th amongst 121 countries on Global Hunger Index (GHI), 132nd on Human Development Index (HDI) among 192 countries and in the lowest rung in terms of per capita income despite being the fifth largest economy in overall GDP ranking. The abysmally low per capita income is not just due to India's population size but equally because of extremely high income inequality. The richest 1% in India 33% of national wealth and 22% income while the bottom 50% have to make do on just 13% of national income and less than 6% of national wealth.

As per the World Social Protection Report 2021 of the International Labour Organisation the spending on social protection (excluding health) in India is 1.4% of the GDP, while the average for even low-middle income countries is 2.5%. During Covid Pandemic, as per the Oxfam Report 2021, ‘Inequality Kills’ 84% of the Indian households reported reduced incomes, while the wealth of the 142 billionaires doubled. The United Nations Sustainable Development Goal Report, 2021 about attaining social goals in domain of education, health, housing, life expectancy India ranks 121st out of 169 countries.

The Modi Govt is moving rapidly ahead with its privatization and assets sale plan to transfer more resources to its corporate masters while simultaneously labelling India's extremely low level of social sector spending as being unnecessary and wasteful. With growing privatisation more and more people will have diminished access to public services. Such excluded and deprived citizens will be called 'beneficiaries' surviving on token transfers from the state for which they will have to remain eternally loyal to the ruling dispensation, now increasingly monopolised by the BJP. The propaganda being built around the 'revdi culture' or freebies discourse needs to be challenged head-on with a powerful assertion of the real producers of wealth, the working people of the country, to claim their rightful share and fair delivery of public goods and services. 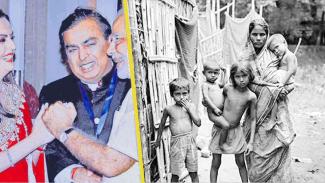