India’s downslide on the Global Hunger Index continues uninterrupted. From the 94th position among 107 countries covered in 2020, India’s ranking dropped by seven positions to 101st out of 116 in 2021 and by another six positions in the latest 2022 index dropping to the 107th rank among 121 countries. Except war-ravaged Afghanistan, all our neighbours are considerably ahead of India in this list. China, still marginally ahead of India to occupy the slot of the world’s most populous country, is way ahead in the topmost GHI range of 1 to 17. In other words, while the incidence of hunger in China is considered low, it is considered serious in India. India’s child wasting rate, which reflects acute malnutrition among children under five, is the highest in the world.

The Modi regime combats hunger by banishing it from the public discourse and calling the GHI a western conspiracy. A decade ago the Sangh brigade and the dominant media used to go ballistic against rising prices and the falling rupee. Now, the prices of petrol, cooking gas and every essential item of mass consumption are shooting through the roof and the rupee is daily falling against the dollar, just a few hits away from reaching the century mark. Ten years ago, Gujarat CM Narendra Modi used to cite the fall in the rupee’s exchange value as the ultimate sign of a weak government and economic mismanagement. Today, Modi as the Indian PM keeps deafeningly silent about the rupee’s free fall while the Finance Minister explains it as the strength of the dollar! Instead of confronting the reality of acute hunger, soaring prices, dwindling rupee or vanishing jobs, Modi continues to bombard his audience with the fairytale of ‘ease of doing business’, an index which the World Bank has discontinued since September 2021 after an independent audit exposed how the rankings were tampered with.

The Sangh brigade is all too aware that it can only win elections by spreading lies and harvesting hate. Ahead of the forthcoming Himachal Pradesh and Gujarat elections, we therefore see a renewed focus on hate campaigns. Before the UP elections we saw the BJP perfecting the hijab ban experiment in its Karnataka laboratory. Now while the hijab ban issue continues to linger in the Supreme Court, Sangh brigade leaders in Delhi and NCR are once again busy spewing venom, calling for persecution ranging from anti-Muslim boycotts to outright genocide. And within Gujarat the polarization that began on the very day of the 75th anniversary of India’s independence has been sharpened further during the Navratri festival and attendant Garba celebrations with the targeted exclusion and public humiliation and flogging of Muslims. It is now on record that the August 15 release of the rape and murder convicts in the Bilkis Bano case was sanctioned by the Union Home Ministry, against the advice of the CBI and a Special Judge and contradicting the amnesty policy announced by the ministry itself which ruled out releasing convicts of heinous crimes like rape and murder.

Compounding this campaign of communal polarization and hate is the doctrine of paranoia and vendetta as state policy. National Security Advisor Ajit Doval had famously dubbed civil society the latest frontier of war. Now Defence Minister Rajnath Singh has taken this doctrine to an altogether new level by terming the idea of independence of every institution – be it media or social media, judiciary, NGOs or political parties – a looming threat to the nation’s unity and security. This paranoia drives the executive in framing conspiracy cases and invoking draconian laws against dissenting citizens and keeping them imprisoned for years, even as the apex court overturns the acquittal of a wheelchair-bound professor suffering 90% disabilities by citing the brain as the most dangerous organ in cases involving charges of terrorism or Maoism. While professional peddlers of hate roam scot-free, bail petitions of movement activists like Umar Khalid who campaign against hate are dismissed for allegedly ‘not having any merit’.

Can we have free and fair elections in such an overwhelming environment of hate, lies and fear? The Election Commission, it seems, does not even want us to think of free and fair elections any more. On the ground the electoral roll is being systematically linked up with Aadhaar cards even as the EC keeps telling us that this linkage is purely voluntary and no existing or aspiring voter will be disenfranchised for not furnishing Aadhaar details. While the BJP is busy announcing pre-poll project launches and tax cuts in Gujarat and Himachal Pradesh, the EC is proposing to amend the model poll code of conduct to subject poll manifestos of political parties to economic viability tests, thus arrogating to itself the power of political censorship undermining the very spirit of political freedom in a multiparty parliamentary democracy.

Additionally, the EC in Gujarat is signing MoUs with individual firms and industry bodies giving them the right to monitor the electoral participation of their workers, including naming and shaming of workers who fail to vote! In place of free elections without fear or favour, we now thus see a system being evolved to subject voters to intimidation and surveillance through Aadhaar-electoral roll linkage and corporate monitoring of electoral participation. Needless to add that it will take only a small step to pass from ‘monitoring participation’ to influencing and dictating voter choice and determining the actual outcome. When the state thus threatens to make a complete mockery of parliamentary democracy, it is the job of citizens to stay alert and foil this fascist design by reclaiming the electoral arena and animating it with the issues, struggles and rights of the people. 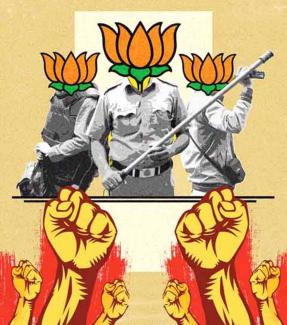