It is our considered opinion that the proposed amendments issued by the Election Commission of India vide Letter dated 04.10.2022 bearing no. 437/6/Manifesto/ECI/INST/FUNCT/MCC/2015 are not grounded in law and are inherently undemocratic in nature.

At the very outset, we would like to bring to your notice that per Article 324 of the Indian Constitution, the ECI is vested with the power and responsibility of superintendence, direction and control of the preparation of electoral rolls and smooth conduct of elections. It was widely reported (No power to check parties, govts from promising freebies: ECI to SC, Indian Express, April 9, 2022) that the ECI itself had mentioned this constitutional context in the affidavit filed in the Supreme Court (Ashwini Kumar Upadhyay v. Union of India).

To quote from the affidavit submitted by the ECI: "That offering/distribution of any freebies either before or after the election is a policy decision of the party concerned and whether such policies are financially viable or its adverse effect on the economic health of the State is a question that has to be considered and decided by the voters of the State. The Election Commission of India cannot regulate state policies and decisions which may be taken by the winning party when they form the government. Such an action, without enabling provisions in the law, would be an overreach of powers".

Despite admitting to not having any such powers, the proforma prescribed by the ECI amounts to precisely such an overreach. It would require political parties to provide detailed plans for implementation of their poll promises, complete with intended coverage of beneficiaries and sources and methods of necessary financial mobilisation. Such a proforma would give the governments of the day and the ECI undue powers of control over election manifestos of political parties and hence over the elections themselves.

Let us make it clear that we reject the approach of viewing welfare measures needed to provide immediate relief to people in distress and uplift the economic and social conditions of deprived and marginalized sections of our population as "freebies". If we have to identify freebies, we can actually see them in the enormous benefits being handed down to the big corporates and super rich through tax exemptions and tax holidays, cheap loans, loan write-offs and waivers, sell-off of public assets and transfer of control over natural resources by sundry means. Such 'freebies' are a huge burden on the public exchequer. Every year the public exchequer is being robbed of lakhs of crores of rupees in the process. In 2020-21, Rs. 5,51,000 crore was written off by the Union government in corporate income tax, excise and customs duties benefitting the rich. The previous year it was Rs 5,00,823 crore. The total since 2005-06 is well over Rs 42 trillion.

Our Constitution has made a solemn commitment of equality and comprehensive justice to the people of India. Fundamental rights apart, we have a section on directive principles of state policy in the Constitution which should actually guide our election manifestos. Instead, the proposed amendment and the prescribed proforma seeks to subject poll manifestos to prevailing budgetary allocations and priorities that have failed the people miserably in guaranteeing universal food security, shelter right or access to education, healthcare or employment. After 75 years of independence, we find India at the 107th position among 122 countries on the Global Hunger Index.

The entire purpose of policy-making and budgetary exercise should be to reorient priorities and mobilise necessary resources and use them in appropriate ways to guarantee basic rights of our people and ensure their greatest welfare. It is for the people to judge political parties on the basis of their track records and hold them accountable especially when voted to power. The bureaucratic status-quoist checks on the freedom of political parties to draft their poll manifestos will hamper the very dynamics and role of electoral democracy and competitive politics as a means of achieving progressive social and economic change and fulfilment of people's needs and aspirations.

We therefore reject the proposed amendment lock, stock and barrel and request the ECI to drop the very idea of such unwarranted regulation and institutional overreach in violation of the constitutional jurisdiction and brief of the ECI. 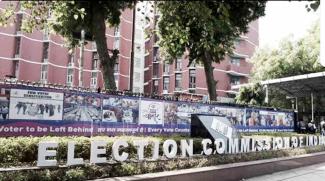