The Intergovernmental Panel on Climate Change (IPCC), a UN body, has lavished praise on Kolkata’s public transport infrastructure. In a report titled titled “Climate Change 2022: Mitigation of Climate Change” highly appraised Kolkata’s 12 different modes of public transport that provides citizens with a wide variety of transport options. On the other hand, the virtual extinction of the once extensive tramways network in Kolkata, stands in stark contrast in ensuring low emissions transportation options in Kolkata.

The Decline of Trams in Kolkata

Trams in Kolkata have been facing a long and slow decline as private vehicles have been prioritised by the transport department. While there has been a remarkable increase in the pace of this decline during the TMC rule, the roots of the problem can be traced back even further to the Left Front era.

In 1980, Calcutta Tramways Corporation (CTC) received a grant of Rs 46.20 crores for a transportation improvement project. This fund was used to buy 169 new tramcars from Burn standard and Jessop. Around 25 tramcars were rebuild in the Nonapukur tram depot as well. In the succeeding four decades, none of the revenue generated were used to upgrade the tramways infrastructure further. In 2004, the then Left Front government, used 80-85% of Rs 110 crores investment to de-reserve tram tracks and make them useable to private vehicles. The result has meant that trams were now subject to traffic congestion and a drastic reduction in passenger safety as they now have to board and alight from trams in the middle of speeding traffic. Since 2011, the number of operational tramcars have fallen from 180 to 20, even though the fleet strength has largely remained the same. Trams have been treated as a cultural curiosity and a tourist attraction rather than a viable and sustainable means of mass transportation. Several tram routes have been closed as they have been branded ‘unprofitable’ despite the fact that their unprofitability is itself the result of a strategy of planned obsoletion. This strategy has gone hand in hand with the broader push towards privatisation and retrenchment of workers. The number of permanent workers in the CTC has been slashed from 7300 to 2300, while the CTC itself has been merged with the West Bengal State Transport Corporation. Between 2014 and 2016, 349.01 cottahs of land owned by the five tram depots in the city were sold for 229.31 crore Rupees.

This strategy is particularly egregious when we take into account the fact that there has been a sustained push for ensuring pedestrian and bicycle friendly streets all over the world. Cities like Amsterdam, Paris, and Madrid have restricted cars in where were formerly important thoroughfares in these cities and revived both a dynamic street-life and enabled improvements to the quality of life due to better air quality and lower sound pollution. In many parts of the developed world, lightrail systems akin to trams are being introduced and expanded as the demand for public transportation grows and governments look for sustainable alternatives. The Trinamool Congress government is reportedly courting Tesla CEO Elon Musk to set up an electric car manufacturing plant in West Bengal. Yet it cannot seriously comprehend reviving Kolkata’s tramways network and invest in much needed expansion initiatives. Instead the TMC government has proposed to use the non-functioning tram depots as charging stations for electric vehicles and electric buses!

More often than not, the only improvement in transportation system we have seen is the expansion of existing thoroughfares, by demolition of settlements of urban poor, and creating flyovers to bypass traffic. Yet any urban planner will be well acquainted with the problem of induced demand in traffic management. The expansion of roads and the lack of effective alternatives only serve to increase the amount of traffic congestion.

Civil society groups and workers unions have opposed moves for further closure of tram routes. It is however clear that simply preserving the remnants of the tramways in Kolkata isn’t enough. An extensive strategy of revival is required that encompasses the demand for all shut down tram routes to be reinitiated. The clear demands should be:

The government, in consultation with municipal bodies, workers and, daily commuters, must declare a comprehensive public transportation plan for the next 10 years. Clear emphasis should be given to encourage commuters to walk, bicycle and use public transport within such plans.

A strategic revival of urban transportation through updating the tramways in Kolkata could in turn provide massive boost to economic growth and a driver for job creation. We should build upon our strengths rather than pursue failed models of car-centric urban growth and development. 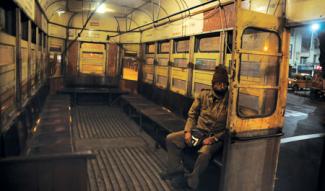