The ouster of Imran Khan in Pakistan has once again plunged the country into political crisis that threatens to further aggravate its economic woes. Thousands of Pakistanis have taken to the streets both inside Pakistan and across the world to oppose the deposition of Imran Khan and demanding fresh elections. The finger of accusation is directly towards the Pakistani establishment, especially towards the Army. Moreover Khan has accused the United States of meddling in the country’s internal affairs.

Troubles between the army and Imran Khan began when we clashed with the army chief General Qamar Javed Bajwa over the replacement of ISI director-general Faiz Hameed with Lt Gen Nadeem Anjum. However long-term structural problems cannot be overlooked as leading up to the crisis. One major cause of the crisis has been Pakistan’s dependence on IMF loans that have been used to subsidize its enormous military budget accounting for 20% of its annual spending. Pakistan has received 13 bailout packages from the IMF since 1988. However, Pakistan has been largely reluctant to tax its wealthy elite to meet its budget deficits.

It is perhaps quite ironic that Imran Khan was strongly backed by the army during his election in 2018. At the same time he had promised to end corruption, break the cycle of debt reliance, and create an ‘Islamic Welfare State’. Based on these promises, the Imran Khan led Pakistan Tehreek-e-Insaf (PTI) had received over 30% of the votes, giving it a plurality in the National Assembly. However, by this time Pakistan’s debt crisis had grown to such an extent that debt servicing costs themselves were depleting its foreign exchange reserves. While Khan had promised to not seek another bailout from the IMF, he sought loans from China, Saudi Arabia, and UAE. These however did not prove sufficient as Khan finally had to approach the IMF, which imposed crushing austerity measures. These included 40% reductions in spending on education, privatization of healthcare and reduction in fuel subsidies.

The result was a devastating recession that compounded the COVID19 pandemic, resulting in inflation in Pakistan with price of goods increasing by 10% in 2020. Imran Khan on the other hand continued to flip-flop between implementing the IMF’s austerity measures and rejecting them throughout 2020 and 2021. This has resulted in the overall support for Khan in Pakistan plummeting below that of the opposition.

The opposition started to coalesce around the Pakistan Democratic Movement (PDM) which saw the convergence of erstwhile antagonistic parties like PPP and PML(N) in 2020. It claimed that Khan had mismanaged the economy and that his election in 2018 was rigged by the country’s military establishment. The group made significant maneuvers in March 2022, which saw 20 PTI MNAs defect and the ruling coalition lose support of Muttahida Qaumi Movement (Pakistan) and Balochistan Awami Party. When the opposition moved a no-confidence motion, Khan sought to dissolve the national assembly and call elections afresh. The Supreme Court however blocked this move and on 11th April Shehbaz Sharif was elected as the Prime Minister.

Sharif will find it difficult to administer effectively given that Khan is bound to continue supporting popular opposition on the streets and has called his ousting a foreign conspiracy. Aasim Sajjad Akhtar of Awami Workers Party has pointed out that while Khan is cynically deploying an anti-imperialist language against his opponents, Pakistan does need a genuinely anti-imperialist movement to move forward. Many, who have long opposed the Pakistani establishment and subjected to harassment by PTI supporters for it, are experiencing some degree of schadenfreude at its misfortune. However Akhtar argues that this should ultimately be a cause for concern and may undermine democracy . 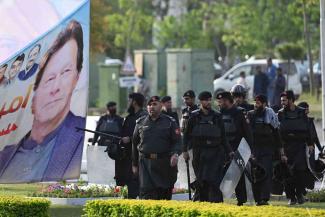