With Assembly elections underway in Uttar Pradesh and four other states, the BJP is desperately looking for ways to sharpen communal polarisation. We saw a hate assembly in Haridwar, camouflaged as Dharm Sansad, issue open calls for genocide. Similar calls were soon echoed in several other public gatherings. Meanwhile, Karnataka, the Southern laboratory of the Sangh-BJP brigade, has discovered a potent weapon in the hijab worn by many Muslim women. Starting from a college in Udupi, the wearing of hijab has now been effectively banned in Karnataka educational institutions with the High Court refusing to stay the Government order and mobs heckling and hounding hijab-wearing women across Karnataka.

This denial of the Muslim woman's right to wear hijab to educational institutions has already been termed ‘hijab jihad’, much as inter-faith marriages are being criminalised as ‘love jihad’. That this 'hijab row' was calculated to 'boost' the BJP's election campaign in poll-bound states became very clear with the Uttarakhand BJP CM promising to implement the Uniform Civil Code and a BJP MLA in UP seeking votes to make Muslims stop wearing skullcaps and start applying tilak on their foreheads! Hijab and skullcap are among the most prominent markers of Muslim identity and the BJP clamour for 'uniform civil code' is clearly aimed at rendering these markers of Muslim identity invisible and thus homogenising the diverse Indian identity into a uniform RSS-dictated identity.

The 'hijab ban' violates the fundamental rights guaranteed by the Constitution on several counts. It is clearly a denial of a woman's basic right to choose her attire. School and college uniforms have always accommodated religious markers including bindi, threads, turbans, and hijabs. But the tendency to prescribe dress codes for women has clearly grown in recent years. This ban on the hijab is as violative of a woman's fundamental right to choose her attire as the khap panchayat diktats heard periodically against girls wearing jeans. The hijab is also very much linked to religious belief and identity as is the turban for Sikh men. The ban therefore is also a violation of religious freedom.

The Karnataka government had closed educational institutions in the name of maintaining law and order. Women wearing hijab to colleges never created any law and problem. It was the crowd mobilisation by ABVP and other organisations of the Sangh brigade which threatened human rights and campus peace. The video of a single woman, Muskan Khan, being heckled and hounded by a male crowd waving saffron shawls glaring conveyed this reality to the whole world. Yet the Karnataka High Court in its interim order ignored this brazen reality and effectively upheld the ban issued by the state government in spite of the fact that several judgements issued by Courts have upheld the right of hijab-wearing women in educational institutions.

By forcing a cruel choice between faith and education, or freedom and education for that matter, the Karnataka High Court has done a disservice to the cause of women's education. We are already seeing students opting out of classes and examinations as a consequence. The apparent neutrality of the interim court order is based on a false equivalence. Hijabs are part of customary attire for Muslim women whereas the saffron shawls were displayed as an act of aggressive or threatening protest. We also saw the act of saffron flags being hoisted in college campuses. Clearly the motivation for the saffron shawls and saffron flag came from the RSS ideology and not from any tradition or customary practice. Some students wore blue shawls and chanted Jai Bhim to express their solidarity with the Muslim women facing discrimination and humiliation. By putting all things in the same bracket, the Karnataka High Court has only emboldened the aggressors and let down the victims.

There is a derailed liberal opinion which overlooks the whole politico-cultural context of the hijab row and welcomes the ban as a step towards empowerment of Muslim women. Nothing could be farther from the truth. Muslim women in India are not facing any Talibani fatwa about wearing hijabs, if anything can be likened to a Taliban-type aggression it is the pressure mounted by the state and the lynch mobs on the streets of Karnataka against women wearing hijabs. Even a Hindu lawyer arguing in support of the petition to uphold the right to wear hijabs is being trolled as an enemy of the 'Hindu cause' while the BJP even revealed the details of the Muslim petitioners so as to subject them to intimidation and even potential violence. Needless to say, under these circumstances Muslim women will face greater counter-pressure from their families and conservative sections within the community to conform to community standards and prescriptions.

Much like Gujarat and Uttar Pradesh, Karnataka has been identified by the Sangh-BJP establishment as a special laboratory to develop a wide range of weapons and wage a multi-pronged warfare to advance its political agenda of Islamophobia and communal polarisation. In order to secure full backing of state power for this ominous mission, the BJP first toppled the non-BJP government in the state and after two years secured a change at the helm to launch a full-scale fascist offensive with virulent communal mobilisation on the ground. Laws are being changed, new rules are being framed and a veritable reign of terror is bring unleashed to target the Muslim community and curb dissenting voices. After the assassinations of MM Kalburgi and Gauri Lankesh, the hijab row is another wake-up warning from the southern laboratory of the Sangh-BJP brigade.

The Gujarat laboratory produced a genocide twenty years ago, and in its wake, a police state mired in massive corruption. The UP laboratory gave us another police state and the most cruel and callous governance. India must wake up to the warnings coming from Karnataka without losing any time. 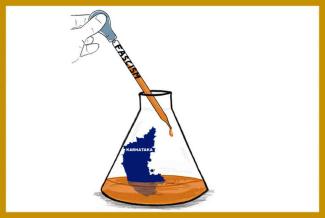