“The first division of labour is that between man and woman for the propagation of children”, wrote Marx and Engels in an unpublished manuscript. Indeed, the bearing of a child imposes a heavy burden on a woman, even when the pregnancy may not have been a matter of choice for her. In this view, the recognition of her agency to choose to terminate the pregnancy is a matter of utmost importance in the upliftment of women and the realization of gender equality.

As per a recently leaked draft of a USA Supreme Court majority opinion, the landmark judgment of the USA Supreme Court in Roe v Wade (1973), which upheld the constitutional right to abortion is to be overturned. The judgment, if effectualised will have a host of repercussions across the world. In fact, even the draft is indicative of the rise of the global right.

Roe v. Wade was hugely significant in that it decided that a foetus has only a potentiality of life, and not life itself. It recognized that abortion was a constitutionally protected right, and derived this from the rights to privacy and liberty of the woman. The court decided that there could be no state regulation for the first trimester of the pregnancy except as per the judgment of the woman’s doctor. Thereafter, in the interest of maternal health, certain regulations were made permissible. However, it would only be at the stage of viability [defined by the court as the stage when the foetus developed the capability of meaningful life outside the mother's womb] that the State regulations in the interest of the protecting the life of the foetus could arise.

The case again came up before the Supreme Court in 1992 in Planned Parenthood v. Casey. The Court upheld the “essential holding” of Roe v Wade including the recognition of a woman’s right to choose to have an abortion before foetal viability and to obtain it without undue interference from the State. However, the trimester framework was replaced by an undue burden standard, that meant that any regulations brought in by the state could not place an undue burden / or a "substantial obstacle in the path of a woman seeking an abortion before the fetus attains viability."

Now, the draft opinion holds that explicitly that  “Roe and Casey must be overruled. The Constitution makes no reference to abortion, and no such right is implicitly protected by any constitutional provision.” The opinion holds that “Liberty” is a capacious term”, and would not give guidance to the interpretation to the term Liberty in the  US Constitution. The court went further to hold that the court must be reluctant to read in rights not mentioned in the Constitution, and broad interpretations “sometimes led the Court to usurp authority that the Constitution entrusts to the people's elected representatives.” The opinion states “The inescapable conclusion is that a right to abortion is not deeply rooted in the Nation's history and traditions” and “There is ample evidence that the passage of these laws was instead spurred by a sincere belief that abortion kills a human being”. Finally, the Court held that the viability line “makes no sense”, and overrules the decisions in Roe and Casey, while stating that elected legislative bodies must have the power to regulate abortion.

The draft judgment destroys the fundamental rights of dignity, autonomy, and liberty that every constitutional person is entitled to. To grant a conservative / patriarchal state the power to legislate on the right of women to choose abortions is to hold that if the people so choose, then the violation of these rights are justified. What then differentiates the so-called Constitutional State from majoritarianism?

The draft judgment is an abdication of the court’s duty towards the rights of women, but more, it reflects a dangerous disintegration of the separation of powers doctrine that is supposed to insulate the judiciary from the political executive. With the rise of the global right, so too, we are seeing a rise of the conservative judiciary and politically motivated judicial decisions.

Importantly, Roe v Wade has been used in Indian courts, most notably by the nine-judge Supreme Court decision in K.S. Puttaswamy vs. Union of India (2017) whereby the fundamental right to privacy of each citizen under Article 21 of the Constitution of India was recognised. In this judgment, the court noted “Hence, it would be an injustice both to the draftsmen of the Constitution as well as to the document which they sanctified to constrict its interpretation to an originalist interpretation. Today’s problems have to be adjudged by a vibrant application of constitutional doctrine and cannot be frozen by a vision suited to a radically different society.” The court went on to hold that “Privacy includes at its core the preservation of personal intimacies, the sanctity of family life, marriage, procreation, the home and sexual orientation. Privacy also connotes a right to be left alone.”  Along with the adoption of the idea of a transformative constitution, courts have held that the doctrine of progressive realization of rights, as a natural corollary, gives birth to the doctrine of non-retrogression, which sets forth that the State should not take measures or steps that deliberately lead to retrogression on the enjoyment of rights either under the Constitution or otherwise.

India has a relatively progressive legal regime in the Medical Termination of Pregnancy Act, 1971, permitting abortion in certain cases up to 20 weeks including failure of contraceptives (in cases of married couples). The recent amendment  made in 2021 allowed termination of pregnancy up to 24 weeks in case two medical practitioners so advice, and even thereafter by the diagnosis of any of the substantial foetal abnormalities diagnosed by a Medical Board. However, the Act remains an exception to Section 312 on the Indian Penal Code, 1860, which makes causing of miscarriage a penal offence. Moreover, even as it stands, the MTP Act places the final decision of autonomy in the hands of doctors and not of women.

In reality, abortions are both highly stigmatic and highly prevalent in India. There is an acute shortage of qualified professionals – the most recent District Level Household Survey under the Govt. of India showed that up to 62% govt. hospitals don’t have gynaecologists on staff. Other reports show that in a country of 1.36 billion, there are only around 50,000-70,000 OB-GYNs (obstetrician-gynaecologists). In 2015, The Lancet conducted a large scale study on abortions in India, and released perhaps the first report of its type titled “The incidence of abortion and unintended pregnancy in India, 2015” in 2017. The report estimates “that 15·6 million abortions (14·1 million–17·3 million) occurred in India in 2015. The abortion rate was 47·0 abortions (42·2–52·1) per 1000 women aged 15–49 years. 3·4 million abortions (22%) were obtained in health facilities, 11·5 million (73%) abortions were medication abortions done outside of health facilities, and 0·8 million (5%) abortions were done outside of health facilities using methods other than medical abortion… Abortions accounted for one third of all pregnancies, and nearly half of pregnancies were unintended.”

Appalling statistics also emerge from the recent National Family Health Survey -2019-21 (NFHS -5) conducted by the Ministry of Health and Family Welfare, Government of India. The report shows that more than one-third of men believe that contraception is women’s business and that men should not have to worry about it. Twenty percent of men believe that a woman who uses contraception may become promiscuous. Moreover, female sterilization is the most popular method of contraception, with 37.9% use, as opposed to male sterilization with 0.3% use. Other contraceptives less commonly used are condoms (9.5%), the Pill (5.1%), IUD (2.1%) and Injectables (0.6%). The NFHS 5 also shows that more than one-quarter (27%) of the abortions were performed by the woman herself at home. So, the burden and blame of contraception and abortion is on the woman.

It is no surprise that pregnancy and child bearing results in mass exclusion of women from the workforce. After giving birth, a woman is relegated to the household as a wife and mother and immersed more deeply into the spaces of patriarchal household oppression. The US draft opinion noted the arguments of those anti-abortion that “laws ban discrimination on the basis of pregnancy, that leave for pregnancy and childbirth are now guaranteed by law in many cases, that the costs of medical care associated with pregnancy are covered by insurance or government assistance; that States have increasingly adopted safe haven laws, which generally allow women to drop off babies anonymously; and that a woman who puts her new- born up for adoption today has little reason to fear that the baby will not find a suitable home.” However, accurate or deceptive such a characterization is in the American context, there is no doubt that the same is not true in the Indian context. Here, there is an overload of unwanted babies and children who are brought up, if they live, in conditions of horrifying poverty and abuse. If pregnancy results in a child, then the burden of rearing the child is disproportionately on the woman.

Having considered the parallel regimes on paper and on ground in respect of abortion, we must also account for the rise of the rightwing Hindutva in India, as part of a trend of increasing global conservatism. The ruling dispensation represents majoritarian Hindutva sentiment, which is nothing but a reflection of age old Manusmriti. The Manusmriti institutionalies of male control over the female body was in a caste framework, which is now expanded to a caste / class / religion framework. Society has proved to be well equipped to enforce Manu diktats through both the most violent and the most insidious mechanisms.  So too, the energies of the State are towards the curbing of autonomy of that majority of society that is not Hindu upper caste male.

Thus, in India, women are underrepresented in all sections – in all organs of state, in all leadership positions and effectively in all decision making positions. Chauvinist tendencies prevail across the board – from the Supreme Court, to the Parliament to the individual households comprising our nation. The duty on the State to ensure the development of the rights of women is not only ignored, but actively violated in the implementation of Hindutva politics. Who can forget the brutal burning by the police of a Dalit woman’s body gang-raped by upper caste men in Hathras? Or the whole-scale snatching away of Muslim women’s right to education in the guise of standardization in uniform?

In this framework, any dilution of reproductive rights would result in the further subjugation of women through the instrument of pregnancy. As early as In 1792, in her ‘A Vindication of the Rights of Woman’, Mary Wollstonecraft wrote:

“Consider.. whether, when men contend for their freedom, and to be allowed to judge for themselves respecting their own happiness, it be not inconsistent and unjust to subjugate women, even though you firmly believe that you are acting in the manner best calculated to promote their happiness? Who made man the exclusive judge, if woman partake with him the gift of reason? In this style, argue tyrants of every denomination, from the weak king to the weak father of a family; they are all eager to crush reason; yet always assert that they usurp its throne only to be useful. Do you not act a similar part, when you force all women, by denying them civil and political rights, to remain immured in their families groping in the dark?”

The principle of non-retrogression now accepted by the Supreme Court lays the framework for a robust rejection of dilution and attempted rollback of rights by State actors. Today the role of a revolutionary women’s struggle in seeking for civil and political equality must embrace reproductive freedom, as a core aspect in achieving unconditional autonomy of woman, which is the sole route to her emancipation. 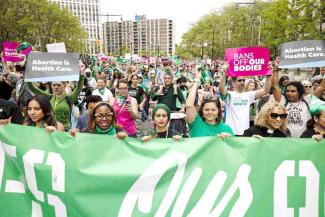