Regarding the police firing in Ranchi, Jharkhand, the party has said that the vandalization and violent police firing during protests in Ranchi were due to serious administrative negligence by the Hemant government. It is clear from available video footage that shots were fired into the crowd in the name of aerial firing, resulting in the death of two youths. CPIML has demanded action against the guilty police personnel. This incident must thoroughly be investigated through a judicial inquiry.
The government and police cannot shirk accountability for the deaths that occurred due to police firing into the crowd. The government should give monitory compensation as well as other required help to the families of the deceased.

Furthermore, the party strongly opposes and condemns the Bulldozer Raj in Uttar Pradesh, where for the second consecutive day BJP ruled government have launched demolition and witch-hunting campaign against people from Muslim communities, especially targeting anti-CAA activists and their family members. Such illegal demolition and reprisal campaign to harass and threaten a particular community has no place in democracy.

On 13 June a protest was held in Delhi against the demolition of Afreen Fatima's house in Prayagraj/Allahabad and BJP's fascist Bulldozer Raj targeting members of Muslim community.

A citizens' march was organized in Patna on 14 June 2022 against hate-mongering and organized attacks against Muslims through the vulgar and offensive remarks on Prophet Mohammed by BJP spokespersons. The march started from IMA hall and culminated in a meeting at Kargil Chowk. Leaders and activists from opposition parties and people's organizations attended the march, including CPIML General Secretary Dipankar Bhattacharya, all CPIML MLAs, RJD leader Alok Mehta, CPIM leader Arun Mishra, Congress leader Shakeel Ahmed and leaders from AIPF, AISA, RYA and JASAM. Slogans were raised against Bulldozer Raj and the razing of Afreen Fatima's house, against Nupur Sharma's and Navin Jindal's hate speeches, and against the police firing in Ranchi.

Addressing the meeting, Dipankar Bhattacharya said that the objectionable remarks against Prophet Mohammed by BJP spokespersons drew worldwide condemnation and diplomatic chastisement of Indian High Commissions in Arab countries, which led BJP leaders to say that Nupur Sharma and Navin Jindal were 'fringe elements' who should not be taken seriously. But this is a lie. They are not the fringe but the core of BJP. Their offensive remarks against Prophet Mohammed are an attack not only against Muslims but against the Constitution and the very foundation of India. Today there are protests across the country but what is the government's attitude? Jharkhand is not under BJP rule but the police there are controlled by BJP and 2 youths were killed in police firing in Ranchi. In Allahabad, the home of a well-respected anti-CAA activist was demolished by bulldozers. The message is that if you dare to raise your voice in protest, you will be shot dead, your homes will be bulldozed and you will rot in jail. Today every citizen of India needs to stand up to protect our democracy, our Constitution and our composite culture.

RJD leader Alok Mehta and CPI-M leader Arun Mishra stressed the need to fight communalism and fascism and put up a united resistance to the bulldozing of India's democracy. 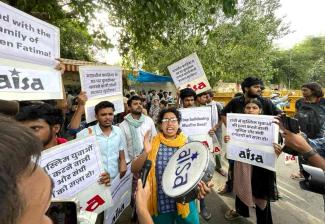