The Ratnagiri Refinery and Petrochemical Project, mooted in 2014 by the Modi government and the BJP-Shiv Sena government of Maharashtra, was touted as Asia’s biggest oil refinery. It was supposed to be a joint venture involving three Indian PSUs -  Indian Oil, HPCL and BPCL – and Saudi Arabia’s Aramco and United Arab Emirates’ National Oil Company.

The project was proposed to be located at Nanar over a vast area of 200 square km. While land-grabbers, speculators and BJP leaders keen on expanding the party’s presence in Konkan region lapped up the project idea, local people started protesting against the project. They had very valid concerns as the area is already replete with several major plants and the environment has been taking a heavy toll.

Beginning with the Tarapur nuclear power plant set up in 1969 umpteen numbers of projects have come up on the creeks along the coast, polluting the air and discharging their hazardous effluents in the creeks without treatment.

It is instructive to look at the scale of environmental havoc to understand the opposition of the people. Dahanu Thermal Plant, the Tarapur NPP, The Boisar and Palghar MIDCs with many chemical units, new port at Vadhvan in Palghar district, are all on the creeks. The Thane Creek and the Kalyan creek have a series of chemical plants in Ambernath, Dombivali, Vasai, Virar and other adjoining MIDCs. The Thane creek gets polluted by numerous small and medium scale chemical and petro chemical units besides Tata’s power plant, the BARC. On the Mumbai Goa Highway, we have Mahad MIDC, the notorious and infamous Lote Parshuram MIDC, Enron plant, Jindal Power, Proposed Jaitapur NPP, Finolex plant and the Reddy mines, all situated on creeks and polluting them., A Pharma Park is also being proposed on the Roha creek.

All these projects have wreaked havoc with the environment, causing immense water and air pollusion, destroyed local livelihood chain and caused massive displacement and dispossession of the people. Each project has therefore witnessed prolonged protests right since the preliminary stages with more and more people feeling the adverse impact.

In the face of growing opposition of the people, the Shiv Sena insisted on the scrapping of the project and ahead of the 2019 elections, the BJP had to accept the Shiv Sena demand and the project was scrapped. But with the BJP coming back to power by splitting the Shiv Sena, the Shinde-Phadnavis government has now announced its intent to revive the project. Earlier, the Uddhav Thackeray government had suggested downsizing the project and relocating it at the Barsu- Solgaon- Devache Ghotane area north of the old site adjacent to the Jaitapur project. But the Shinde government wants to revive the original project idea.

Irked by the experience of the various political parties during the Jaitapur and Nanar struggles, the anti-project agitation is being led by a committee formed by the local population called the “Barsu Solgaon Panchkroshi Refinery Virodhi Sanghatana”. Back in power, the BJP and MNS are aggressively pushing the project. The Ranes are openly threatening the activists. Uday Samant, the local MLA, who was earlier with Shiv Sena and hence opposed the project at Nanar, has joined the new government and has been put in charge of the Industries after he met with Amit Shah at Delhi. The people have not yet allowed any survey and ground testing to be conducted. In the local gram panchayat elections, the Sanghatana fielded its own candidates and won defeating the SS, BJP candidates.

The BJP-Shinde government is now trying to threaten the people by attacking the leadership with notices for externment and conducting flag marches by a joint contingent of armed RAF and local police forces. Fadanvis is talking about the need to establish a Petrochemical Ecosystem while the lumpenized local leadership are busy terrorising the people into submission. But the Sanghatana stands firm in opposition, with women leading the struggle. They are determined not to allow any survey, either physical or by drones.

The battle lines are thus clearly drawn and a powerful resistance is taking shape. 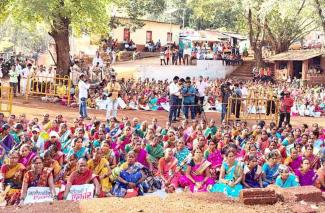