“Literary criticism is an important tool of ideological struggle in times of intense class struggle in the capitalist social system. Writers and critics who serve the interests of the ruling classes have made such use of criticism and the weapons of criticism have also been used by writers and critics fighting against the ideological dominance of the ruling classes.” Manager Pandey observed this in the process to understand the struggles of Muktibodh, but these lines also provide an insight into Manager Pandey’s struggle in the field of literary criticism as well. Developing literary criticism as a means of ideological struggle is the key contribution of Manager Pandey. In his work, realism, historical vision, and ideology form such an organic triad at the level of perception and paradigm that if there is any inconsistency in one, it automatically reflects in the other two.

On November 6, 2022, Jawaharlal Nehru University (JNU), Professor, a stalwart of Hindi literary criticism, and ex-President of Jan Sanskriti Manch, Manager Pandey, passed away. He was 81. He had authored/edited over 30 books, out of which some were translated into other Indian languages. Manager Pandey was born on September 23, 1941, in Lohti village, Gopalganj district of Bihar.

Manager Pandey's critical writings are spread over a period spanning almost five decades. We can examine and understand these writings as a long debate in Hindi literary criticism or as a serious critical struggle. The question is, with whom is this debate or struggle, and which questions and values or paradigms do they aim to establish? Manager Pandey advocated historic vision, ideology, and realism in his entire work. He emphasised the relationship of literature with mass movements and underlined the need to examine the literature in the midst of market, power, and social relations. His work never allows forgetting that literature is a form of resistance. His work on- Sociology of Literature and Culture, Politics of Criticism, Sociology of Criticism, Contemporary context of cultural discussions, challenges of Bhasha languages in the era of the cultural onslaught of imperialism and fascism, concept of class in literature, and identity literature of women, Dalits, tribal, minority groups- performed the continuous task of interpreting from a historical materialistic point of view. Manager Pandey was not a seeker of non-dialectical harmony which is why his criticism not just takes the form of dialogue or discussion but also the form of serious debate or ideological struggle.

To understand the importance of Manager Pandey's ideological struggle, let us remember the contemporary circumstances. The monopolistic dominance of the US Empire after the collapse of the Soviet Union, the rise of fascist communal forces in India, the mobilization of ethnic and regional identities and power sharing, and the ambivalence of postmodernity at the level of world ideology – these were largely the circumstances that shaped the debates on literature and culture since the 1990s. In the field of literary thought, these situations presented the most serious challenge ever in front of concepts like historic vision, ideology, and reality. There was strong opposition to these concepts even during the Cold War. But with the socialist project in jeopardy, the biggest crisis for these concepts was yet to come. It was a scene of slippage, migration, surrender, and also of intellectual despair. Not only in Hindi, but also in other languages, all the thinkers and intellectuals of the left camp were retreating from their ideological commitments, doubting their works of decades, and apologizing. In those difficult times, Manager Pandey further sharpened the weapons of criticism and took a stand against post-modern ideology and the declarations of the end of history and ideology. He raised the flag of anti-imperialism/fascism and anti-feudalism to a new height in the environment of adverse intellectual power balance.

At a personal level, a situation which could have broken any person also occurred at this period of his life. His innocent son was killed by the police in Bihar. It was during this period that he also took charge of becoming the president of Jan Sanskriti Manch. He understood that he was not alone. With him were not just Gramsci, Raymond Williams, Franz Fanon, Muktibodh, D.D. Kosambi, and Jyotiswarup Saxena, but there was a whole tradition of cultural resistance in the intellectual world and by imbibing it hundreds of other fellow companions, young intellectuals too, who were looking for a new direction. It was at this juncture that he took the leadership of Jan Sanskriti Manch and led it from the front.

The preface of the book titled "In spite of the crisis" (Sankat ke Bavjood) written in 1997, in the midst of the cold darkness of the passing twentieth century, is an excellent document of the foresight, awareness, and historical vision of an Indian-Hindi intellectual. At the top of the foreword is Raymond Williams' quote, "We can learn no less from bad times than we can from good times". Manager Pandey did not consider the crisis of the past 20th century to be limited only to the defeat of socialism and the victory of capitalism. In his eyes, this crisis was much deeper and wider. He wrote in the same preface, “The historical crisis that human society is facing at this time is extraordinary and also unique. Not only the human society is in its grip, it is also nature and the environment. If they are destroyed the existence of human society will be impossible…”. How far-sighted this identification of the crisis was, can be understood more easily today.

At a time when it is being loudly propagated that there is no alternative to globalization, privatization, and liberalization, Manager Pandey rightly points out that "the tendency of universalism and globalization is nothing new to capitalism". He writes on Marx and Rosa Luxemburg's evidence. "Rosa Luxemburg said long ago that capitalism can survive only in the non-capitalist world by continuing to expand, so its chances of survival when it ceases to expand will also come to an end. Doesn't this show that capitalism is also heading towards a terrible crisis? Will the end of the process of globalization mark the beginning of the end of capitalism?” It is quite possible.

Just as the mainstream of India's Left movement after India's independence transformed into "Official Marxism", its intellectuals were also charmed by Nehru's so-called socialism. It was not limited to drawing inspiration from the Soviet Revolution but to taking directions from USSR. Despite the suppression of revolutionary peasant struggles in Telangana, Nehru miraculously became the leader of both the capitalists and the leftists of the country. A radical group of left activists and intellectuals could never agree to all this. In the 1970s, radical left activists, students, and intellectuals had also adopted a fairly critical attitude towards Soviet Russia. Manager Pandey has written in the preface of ‘Despite the crisis’- “One of the ironies of Russian socialism was that the rulers and intellectuals there and their foreign supporters also rejected any criticism of the Communist Party of Russia, its power and the system of Russian society. Instead of listening carefully and understanding, they used to dismiss it as part of the campaign of condemnation of Socialism and Marxism.” The late 1960s and the early 1970s, in which Manger Pandey's critique took direction and energy, were decades of revolutionary mass upsurges on a global scale. The heat of the liberation struggles of the colonies had not yet subsided. A small country like Vietnam made the superpower of the world retreat from the battlefields. This period was such when there was a tide of anti-imperialist movements of the people in all the countries of Asia, Africa, and South America. In India, the peasant uprising of Naxalbari (1967) started a new chapter in the left movement of India. Students from Europe and America were on the streets in support of Vietnam and against the war imposed by America. The liberation struggle of Palestine had begun. The heroes of this era were Ho-Chi-Minh, Patrice Lumumba, Fidel Castro, Ernesto-Che-Guevara, and Charu Mazumdar. The left movement of India was going through a sharp internal struggle. If there was resistance, repression was also unprecedented. Banaras was the center of the intellectual movements of this period. During these days, Manager Pandey, who was pursuing higher education in Banaras, became an active participant in these movements. Manager Pandey's critical struggles cannot be understood properly if the ideological atmosphere of those days is not taken into account. Liberation pays its tribute to Professor Manager Pandey. 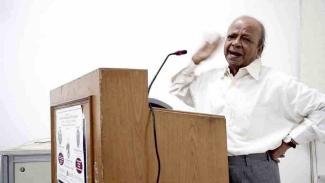