Devanur Mahadeva’s booklet, ‘RSS -Aala Mattu Agala’ (RSS- its ‘Depth and Width) is making waves in Karnataka. In Karnataka the aggressiveness of Hindutva forces is at its peak. It has launched sustained campaigns provoking anti Muslim tirade with issues of Hijab, Azaan, textbook syllabus revision and the like.

The BJP Government of the state has also issued an ordinance, ‘Religious Freedom Protection Act 2022’, which is the opposite of what its name suggests: it makes religious conversion as a cognizable offence, and is especially targeted at marriages in which a Hindu woman converts to Islam to marry a Muslim man.

Devanur Mahadeva (DM) is a very popular Dalit writer of the 1970s generation. He is one of the important key founders of DSS (Dalith Sangharsha Samitee). He has made enormous contributions in literary field and also in political activism. He is also a recipient of prestigious Padma Shree award. He is the conscience keeper of Karnataka. The present booklet needs to be viewed from this premise and stand point.

The booklet is a tiny one, just 64 pages, which can be held in one hand and easily read. DM says that his aim is to analyses RSS to expose its real face and enlighten the people in general.  He embarks to do this by looking at the core spirit of RSS. He selects mainly from the works of VD Savarkar, Guruji Golwalkar, and Hedgewar.  According to Golwalkar the Indian Constitution has to be ‘Manusmriti’, originally this idea was propounded by VD Savarkar. Golwalkar holds Ambedkar’s constitution to be derivative of constitutions of the world, unlike Manusmriti, the law book of Brahminical caste and gender hierarchies.  The inspiration for RSS is the idea of one flag, one leader, one ideology. According to Guruji Nazi Germany is the highest form of ‘race pride’. The religious minorities should merge with the majority and live at the mercy of the them.

DM declares that Golwalkars book ‘The Bunch of thoughts’ has three lethal ideas, they are

DM also refers to the falsehood created about Tipu Sultan regime and campaign carried against him as an anti-Hindu king. The author says BJP-RSS want civil war in India. The network of RSS has spread throughout the country through its hundreds of front organizations. Cadres of RSS are trained to be not human beings but obedient robots.

DM calls on majority Hindus to speak up. BJP-RSS are holding political power is ruling at Centre and in many States. Way back in 1977 they sneaked into Janata Party promising to abandon their dual membership of RSS. Later they have spread throughout the country.  They pose Pakistan as permanent enemy and spread their hate against the Muslims in the home country. By this action the India which was a congregation of Bahutva culture is being divided.

The BJP-RSS government are manipulating to implement ‘Manusmriti’. They are totally against the federal structure of the country. GST is a fatal blow to this federalism. The education system is being revamped to spread Hindutva ideology. The strategy of implementing the ideas of one language, greatness of one Religion and only one leader is the hidden agenda of RSS.

VD Savarkar who wrote the surrender letter to the British Government is being glorified as ‘Veer’, Godse is also being glorified. DM also suggests strategies to defeat BJP in the next election. In this direction he says there are more responsibilities on the non-BJP political parties and organizations. In the process the great delusion of RSS to implement ‘Chaturvarna ‘should be exposed. The anti BJP forces should have the humility and shed their self-righteousness. There are hundreds of path to achieve it. In the process a new coalition/ united front of all the forces pposing BJP should emerge. One should remember that ,‘Hatred destroys its Creator’.

DM is not preaching; on the contrary he is expressing his mind in a simple language which can be understood by all. The booklet is a literary writing of that sort. Being a political activist himself, his thoughts are extremely relevant to the people. That’s why the wave! 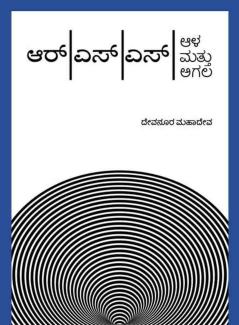