On 1st December 2021, 80 workers of India’s first Public Sector Undertaking (PSU), M/s Indian Telephone Industries (ITI) Limited based in Bengaluru, were terminated with little justification. Despite having worked for between 3 to 35 years, workers are guised as “contract workers.”

The retrenchment of the workers is only one part of a longer history of labour abuse at ITI. In recent times, as with all PSUs, ITI contract workers have been rendered increasingly precarious: they are punished for unionising, denied timely payment of wages and benefits, and are subjected to arbitrary de-promotions and humiliations, not to mention abrupt terminations.

The ITI workers’ struggle entered its 100th day on 10th March 2022. Coinciding with the 100th day, a fact-finding team of concerned citizens released a 25-page report summarising the abuses faced by the retrenched workers. “We feel that the struggle of the ITI workers in the face of such adversity is an ode to resilience and claims making for constitutional rights, fairness, inclusion, and citizenship. Industrial workers’ struggles and farmers’ struggles cannot be disconnected: they are both part of a broader political-economic trend that is concentrating wealth and power upwards in the hands of elite corporate management, both public and private,” say the report authors Akash Bhattacharya, Juhi Tyagi, Malini Ranganathan, Rajendran Narayanan, and Sushmita Pati.

Despite providing services during the first covid wave in 2020, ITI downgraded contract workers from “skilled” to “unskilled” soon after, based purely on their level of education, not experience. As one contract worker put it, “suddenly I became unskilled [from skilled] …In a month I was making about 5,000 rupees less than before. We thought we have been working here for so long, it is okay. We realized only later that we have been working like slaves and not even asking for what they are supposed to give us.” Coded discrimination, disproportionately affecting women and people from marginalised castes and classes, is a key feature of the contract labour system.  Of the 80 workers who were terminated, nearly half are from Dalit backgrounds and a large number are women.

What the Authors Demand

The report upholds the demands of the workers – who came together to form the Karnataka General Labour Union (KGLU), affiliated with the All-India Central Council of Trade Unions (AICCTU). The demands are as follows: to be immediately reinstated; to be allowed to unionise without fear of retaliation; to receive decent living wages and benefits (including maternity benefits); and to be treated with the dignity and respect they deserve as core workers of the company—and as called for by the law.

The Regional Central Labour Commissioner had deemed ITI’s actions as a violation of the Industrial Disputes Act and has insisted that the workers be reinstated. Despite facing a suite of labour rights cases, ITI refused to comply. The report authors, who have also communicated the facts at hand to senior government representatives in New Delhi and Karnataka, strongly condemned the unlawful activities of ITI and demanded penal action against the PSU.

In the light of the current political and economic circumstances in our country, the authors of the report believe that ITI workers’ struggle has the potential to be a watershed moment in Indian workers demanding their rights. The workers’ demands therefore assume a great significance.

The wounds of the migrant worker crisis owing to the arbitrarily imposed lockdown by the Union government are still fresh in our memories. The government used the pandemic to push through the unpopular labour codes which, for all practical purposes, legalizes hire and fire practices and restricts the workers’ right to strike. The workers’ crisis remains unabated even after the pandemic. One of the main reasons for the continued workers’ crisis is that the conditions of work and wages were abysmal well before the pandemic.

A study of the Periodic Labour Force Surveys (PLFS) data from 2018-19 reveals that more than half of the workforce were self-employed, nearly a quarter were daily wage casual workers and about 24% were Regular Wage Salaried (RWS) workers when covid struck.[1] At that juncture merely 4.2% of the total workforce in the country could be categorised as having a ‘good job’ or ‘decent work.’  From the standpoint of human development and access to social protection, casual workers were at the bottom of the pyramid along with many in the self-employed category.

In the course of the pandemic, there has been a steady decline in real wages across each of these segments of the workforce. The decline in real wages has been the sharpest for the self-employed. Even regular wage/salaried workers have experienced a steady decline in real wages over the last three years.[2]  Such sharp fall in real wages has resulted in increased informalisation of work. While the pandemic disproportionately impacted the casual workforce, the ITI workers’ retrenchment demonstrates the precarity of the RWS informal workers even in a well-established public sector unit. Indeed, analysis based on independent surveys suggest that even salaried workers have been forced to resort to self-employment or casual work.[3] These circumstances add urgency to the ITI workers’ demands and underscores the significance of their struggle.

Part of the Fight Against Fascism

What all these point out is that precarity and vulnerability in the country have increased and inequality has widened. The Oxfam report titled ‘Inequality Kills’ presents an unflattering account of the Indian workforce. In 2020, the top 10 percent held nearly 45 percent of India’s wealth while the bottom 50 percent of the population merely had 6 percent of the national wealth. The growing inequality coincides with a steady decline in the corporate tax to GDP ratio from over 3 percent in 2010–11 to a meagre 0.9 percent in November 2020.[4]

This is just broad data pertaining to the overall employment situation. The situation would be starker if we were to present more data on the conditions of education, food security, nutrition, and other human development indicators of the informal workforce. Slicing it further by gender and historically marginalised communities like Dalits, Adivasis and Muslims would make it look worse.

The authors of the report believe that it is crucial to not think of ITI workers, the Swiggy and Zomato delivery partners, Anganwadi workers, even software professionals who faced salary cuts and lost jobs due to the pandemic and continue to suffer as well protest thereafter as separate entities, but to see them all as part of the same continuum of exploitative working conditions. Contractual employment, precarity of livelihoods, indignity of labour, and the criminalization of collective bargaining are generalized phenomena these days.

Besides, the current power structure, heavily tilted towards corporate culture and religious violence and conservatism, looks to crush all dissent, and keep the working people socially and economically vulnerable. The dilution of labour laws is a useful case in point. Powerful workers’ struggles can go a long way in challenging this fascistic status quo. Hence the struggle of the ITI workers is not only theirs, but ours too, the report states.

1. Kapoor, R. “The Unequal Effects of the Covid-19 Crisis on the Labour Market,” The India Forum, 27 July 2020, https://www.theindiaforum.in/article/unequal-effects-COVID-19-crisis-labour-market?utm_source=website&utm_medium=organic&utm_campaign=category&utm_content=Covid-19

2. Anand, I and A Thampi, “Growing Distress and a Falling Unemployment Rate: What is Going on in the Labour Market?” The India Forum, 12 Oct 2021 https://www.theindiaforum.in/article/rising-distress-and-falling-unemployment-rate-what-going?utm_source=website&utm_medium=organic&utm_campaign=category&utm_content=Economy

3. Abraham, R and A Bosole, “Covid-19 and the Informalisation of India’s Salaried Workers,” The India Forum, 7 January 2022, https://www.theindiaforum.in/article/COVID-19-and-informalisation-india-s-salaried-workers 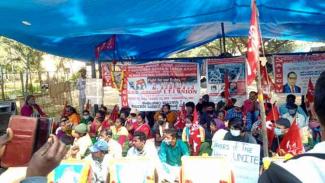