AISA- Karnataka in coordination with Afghan students studying in Bangalore held a dialogue to understand the situation and problems that students are facing after the humanitarian crisis erupting in Afghanistan post the Taliban takeover of the country. AISA’s Lucknow unit too has had meetings with Afghan students, extended support and amplified their concerns.

The following are the concerns students expressed, and wished Government of India would address them with a sense of urgency. They also sought a hand of friendship and solidarity from students, academicians, civil society and the people of India at large, in this troubled hour.

Afghan students are worried about their family members safety and security back home due to the Taliban takeover of Afghanistan after two decades of US imperialism and the consequent political impasse.

AISA is committed to standing by all Afghan students in India, every step of the way, in this time of hardship and anxiety. 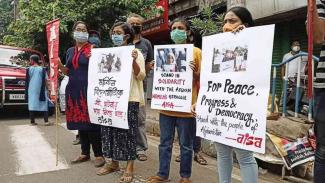