Senior CPIML leader Comrade Balicharan Ram (Bali Bhai) passed away in a tragic road accident in Delhi on 15 August 2022. Comrade Balicharan Ram, popularly known as Bali Bhai, was a well-loved social activist who worked for rights and development of slum dwellers (bastis) in North Delhi and Ghaziabad. On 15 August 2022 he was returning from a basti after attending a program for the 75th anniversary of Independence when he met with the tragic road accident that snatched him away from us.

He was beloved among comrades for the simplicity that was the keystone of his personality. He had an extraordinary ability to mix and establish a dialogue with all persons and was available at all times to help people. He was such an active person that he could be seen driving his motorcycle in three different corners of Delhi on the same day. Bali Bhai hailed from Gorakhpur in Uttar Pradesh. He came from a family which had old and deep ties with the communist movement and CPIML. His mother Comrade Gujarati Devi was a member of one of the oldest generations of CPIML. She is remembered even today as a fearless and committed leader who led struggles for the landless poor of her village against feudal sections. Bali Bhai's leaving us suddenly like this has left us all shocked and speechless. We bid final farewell to him on 16 August at Ghaziabad on the banks of the Hindon river. Bali Bhai's legacy too will flow eternal like a river and keep the fight for social change nurtured and flourishing. 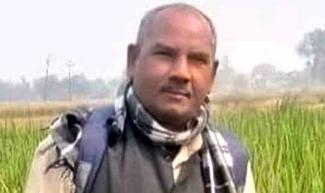