In January 2022, various environmental, human rights and socio-political activists of West Bengal came together to form a platform called ‘Poribesh Odhikar Andolon’. The immediate context of forming the platform is the need to forge larger solidarity with the people’s movement against proposed Deocha Pachami coal mining project posing serious threats to the environment, lives and livelihoods of the people of Birbhum. Amidst ever increasing exploitation of natural resources and challenges of climate crisis, there are many resistance struggles going on in our country which are closely related to environmental issues. This platform aims to build coordination among such environmental and rights movements spread across the state.  After organizing few public meetings, marches and publishing a booklet, a mass convention was organized in solidarity with ongoing environmental movements in order to raise the political questions behind the present climate crisis. Representatives from various movements participated in the convention held on 27 August at the Mahabodhi Society hall in Kolkata to learn about each other, discuss various government policies and outline the course for climate justice. The convention hall decorated with banners, photographs and paintings by Anupam, Tanmay and Laboni reverberated with vibrant cultural performances by young artists Agniwrik, Saptak, Sanjay, Subhankar, Rockey, Arju, Achintya and others. Cultural groups such as Gachheder Jonyo Gaan & Onyo Rokom also performed at the convention. The entire convention was moderated by Mohit Randeep and Madhurima Bakshi.

In the beginning, Shubha Pratim Roy Chowdhury delivered the welcome address and briefly introduced the background and need for the inception of this platform. The draft resolution presented by Malay Tewari focused on aspects of climate change, corporate plunder of natural resources resulting into immense pollution and waste generation as well as various government policies destroying the nature and biodiversity. The draft pointed out some basic direction of action against the profit based capitalist model of development that is the root cause of the environmental as well as eco-social crisis. The conflict between our lives-livelihood-environment with the current model of development is evident and environmental justice cannot be sought without challenging this destructive model. There is a need to repair the damages done so far and compensate the environmental victims and climate refugees, and to withdraw all such policies that exacerbate the crisis. Governments and administration at every level must be held responsible for environmental accountability. Political parties and mass organizations must include environmental questions in the agenda of daily activism.

Noted economist and activist Subhendu Dasgupta, river expert Supratim Karmakar and activist Ashish Kusum Ghosh were among the invited speakers in the convention. Shubhendu Dasgupta in his speech emphasized on the importance of Gram Sabha, PESA Act and CRZ Notification. Supratim Karmakar discussed the historical and geographical significance of rivers and highlighted traditional knowledge of the local communities by referring simple proverbs, rhymes and folklore stories. Ashish Kusum Ghosh acclaimed the convention by saying that access to clean environment has truly emerged as a right through such multifaceted and dynamic deliberations in the house.

The convention hall witnessed representation of a wide range of activists from environmental and mass movements coming from different corners. Budhi Hansda, on behalf of 'Birbhum Jami Jeevan Jeevika O Prakriti Bachao Mahasabha', made it clear that they do not want Deocha-Pachami coal mining project under any condition. Local tribal people already face serious health issues due to surrounding stone crusher industries, the proposed open cast coal project would further destroy the environment and evict thousands of people from their land, livelihood and culture, he said. The latest IPCC report and the COP26 in Glasgow highlighted the dangers of temperature rise and the need to minimize burning of fossil fuel. While India along with other countries have agreed to ‘phase down’ the use of coal and gradually move towards renewable energy sources in international platform, introduction of a new open cast coal project domestically is absolutely contradictory to that. Subhash Hembram and Mary Hansda shared experiences of their struggle against Adani thermal power plant in Godda, Jharkhand. From this power plant Adani group will sell electricity to Bangladesh that will go through high tension transmission towers built in Bengal’s Murshidabad and Malda before connecting to Bangladesh. People in Farakka, Murshidabad have built a resistance against these towers which are forcefully built destroying cultivation of fruit and crops. Jobayer Ali from the Peoples Committee in Farakka told about the mass resistance against corporate plunder and the state atrocities on them. Ayodhya Hills in Purulia located in the easternmost part of the Chhotanagpur Plateau; with a total forest cover of 10,000 sq km. is the traditional and cultural center for local tribal communities and home for thousands of sacred grooves. They are actively resisting the proposed Thurga hydro power project on this hill that would destroy the forests, elephants and their lives. Tilabani hill in Purulia known for its natural beauty is the first choice of the mountaineers for practice and training. Sanjay Das shared the struggle of ‘Tilaboni Pahar Banchao Committee’ against the selling off of Tilaboni Hills to stone traders. Dr. Madan Chandra Karan, a long-time activist of the ‘Sundarban Banchao Committee’ highlighted the real problems of the Sundarban, the largest single block mangrove forest and the people living there who are in extremely vulnerable condition under the threat of climate change.

The convention had a significant presence of many river, canal and wetland activists. Debanjan Bagchi of ‘Jalangi Nadi Samaj’ and Kallol Roy of ‘Nadi Bachao Jeevan Bachao Andolan’ explained that rivers represent biodiversity, livelihood, culture, fertile sediments, water security, climate balance and many more. The natural flow of river is being obstructed by unplanned construction of dams here and there leading to damage of the lives and livelihoods of river dependent communities. He raised demands such as immediate halting of construction of check dams on river Atreyi in South Dinajpur district in order to allow the river to come back to its old form. He also emphasized that international legal measures need to be taken to prevent trans-boundary pollution in the Mathabhanga-Churni river to protect the livelihood of fishermen. The Central River Linking Project is another devastating plan which aims to completely transform our river system. This will take away the rights of river water from millions of ordinary people only in corporate interests. The flow of water in the rivers and estuaries will be greatly reduced resulting in further  rise of  salt water during high tide. Rajeev Dutta explained the need for restoration of Charial Canal which plays very crucial role in canal network of Kolkata. One part of the canal is planned to be passed through microtunnels constructed in an ADB financed project of KEIIP which is slowly causing death of a living aquatic ecosystem. Mujibur Rahman, on behalf of Save Rajapur Canal Movement, said that Rajapur Canal is one of the lifelines of Howrah district, on which about 20 lakh people depend. The river Kana Damodar and numerous small canals connected to it are endangered today. The lives and livelihoods of many villages have been perpetually affected by the pollution caused by the Ambuja cement factory in Sankrail, Howrah. Laxmikant Ari said that despite of the intervention of the Green Tribunal, no one has received any compensation.

There have been many discrepancies in implementation of the Forest Rights Act in West Bengal and present government is very much reluctant in ensuring individual or collective forest land rights to the tribal communities. The central Government has left no stone unturned to manipulate environmental regulations and delegitimize Forest Rights Act by diluting EIA process and introducing new Forest (Conservation) Bill 2022. Swaroop Saha, on behalf of ‘Uttarbanga Banjan Shramjeevi Manch’, said that they are continuing their legal battle over the Forest Rights Act and have recently managed to get some rights after prolonged struggle. Arindam from ‘Jessore Road Gachh Bachao’ movement shared their long struggle against cutting of thousands of centuries old trees in the name of ‘development’. Recently, massive tree felling is also going on in Tarkeswar Chakdighi road widening project. On behalf of the local resistance, Kalyan Adak told that an alternative plan to widen the road while retaining the large trees should be devised which is very much feasible. Rupam Chatterjee of ‘Uttarpara Gano Udyog’, Tapas Chakraborty of Association for Protection of Democratic Rights, Pradeep Basu of ‘Gano Bigyan Samanway’ also addressed the convention. Mrinal Jana presented the resolutions taken from the Convention. The declaration and resolutions of the convention were unanimously adopted with all proposed additions. The convention also pledged to keep a living coordination among various environmental movements and organize workshops on environmental rights on the ground level. The convention was concluded with the closing speech of Tapas Das. 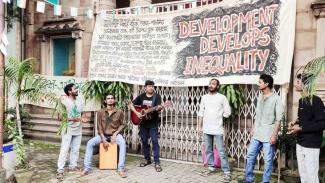