When people in coastal Odisha were living in panic as the news of a cyclone hitting the coast was in circulation 24x7,  around 3 AM in the night on December 4, 2021 3/4 platoon police entered  Dhinkia Village to arrest Debendra Swain, the  main leader of Anti-Jindal & Anti-POSCO Movement. 500 people immediately rushed to  their leader's house to rescue him. The collective resistance of the villagers against the police action was nonviolent and peaceful. But the police beat up villagers with batons, badly injuring two women Santi Das (60), and Tanu Das( 50); and two men Mathuri Das (50), and Manas Bardhan (32). But police had to return without making any arrest.

The Odisha Govt is forcibly grabbing the fertile agricultural land and homestead  land of 11 Villages for the Jindal South West (JSW) Limited Steel Plant. Around 2pm  on 20th Dec, 2021,  the villagers of Dhinkia made  a massive demonstration against the forcible destruction of betel vines at Mahala village border. Suddenly police forces entered Dhinkia village and started thrashing people, injuring many. The police  arbitrarily arrested two persons Ajodhya Swain and Milirani Swain without any reason. Those who sustained injuries include Natha Samal, Prakash Jena, Bhramar Das and Lokanath Swain. 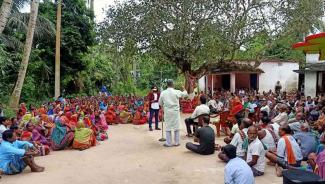