Recent developments in Latin America epitomise the global struggle between a resurgent left, and a powerful, internationally linked far-right, between visions of social justice and environmental protection, and a destructive corporate capitalism bent on escalating plunder. The rise to power of left wing political forces in Chile and Colombia, and the hair's-breadth defeat of the fascist Bolsonaro by Lula's Worker's Party in Brazil have been deeply heartening for progressive observers across the world. At the same time, there are many complexities to this picture including the limitations of 'post-neoliberal' welfare measures based on extractivism and high commodity prices, continuing deeply embedded structural racism and exclusion of Indigenous and Afro-descendant communities, and of course continuing US imperialist intervention in Latin America and the Caribbean region. This cover feature of Liberation comprises a series of write-ups and interviews which analyse recent developments in Brazil, Colombia, Chile and Haiti.

Liberation spoke to Cira Pascual Marquina, regarding the recent victory of progressive and left parties in Latin America, and what are the tasks and challenges ahead for the people's movements in the region in the backdrop of US imperialist onslaught. Cira Pascual Marquina is a political science professor at the Bolivarian University of Venezuela and a co-founder of Escuela de Cuadros, a Marxist education program. She is a political education coordinator and teacher at the Pluriversidad, the educational initiative of El Panal Commune and part the venezuelanalysis.com editorial team. With Chris Gilbert, she is the co-author of Venezuela, the Present as Struggle (Monthly Review), Communal and Working Class Resistance, a book series and ¿Para qué sirve El Capital?

The defeat of Jair Bolsonaro and the victory of Lula da Silva and Workers' Party of Brazil (PT) has raised hope for anti-fascist movements across the world. Can you shed some light on the Brazilian elections and also the role of popular/progressive movements in defeating Bolsonaro.

Now, as leftists, as communists, as people committed to the radical transformation of society, we should also look at the victory from an objective perspective. In other words, we should not be naive. Lula won with a margin of just about 1.5 percent. The difference was very small! But on top of that, Bolsonarism has control over the Senate, it is the main force in the Congress, and it won the governorship in the most populated states in the country, including Sao Paulo.

So what is Bolsonarism? Bolsonarism is part of the global Neo-fascist upsurge led by the lumpen sectors of the bourgeoisie, which are, of course, classist, but also racist, sexist, homophobic, etcetera. Now, the bourgeoisie does not win the elections with its own votes: it requires the participation of other sectors to win an election. To understand the situation in Brazil, we should acknowledge that the Bolsonaro base includes important sectors of the middle class but also, sectors of the working class who are, most often, Christian evangelical. And, I should add, these sectors have a great distrust of the status quo. What does this mean? Clearly, the working class Bolsonaro bases are not our class enemies, and their distrust of the status quo could be turned into an anti-system force.

Walter Benjamin said that behind every fascism, there is a failed revolution, and this is important because it commits us to take a critical look at the periods when the PT was in power. If the Lula years were potentially a revolutionary moment, why is a working-class sector of the formerly PT base aligned with Bolsonarism now?

That apart, if we focus on the current juncture, we should realise that the coalition built by Lula is not exclusively centre-Left: it accommodates shades of the right as well, and that right will exert considerable weight. In fact, Lula's vice president is going to be Geraldo Alckmin. Alckmin is a former Lula contender, he is economically liberal, pro-market, and on top of that, he is a member of Opus Dei (Work of God), a conservative catholic outfit.

Then, I should also mention that half of the parliamentarians are pro-agrobusiness. This has huge implications because international agri-business interests in Brazil are destroying the Amazon rainforest and creating massive environmental havoc around the world.

But of course, the Lula coalition also brings together, and this is very important, left forces, including the Landless Workers' Movement (MST) – an anti-system mass organization and the most important social movement in Brazil – and the Communist Party of Brazil (Partido Comunista do Brasil).

The defeat of Bolsonaro is of course important, but we must remember that Bolsonarism and, in general, right-wing tendencies have not really been defeated. In other words, a new battleground is opening up: we have a more advantageous correlation of forces, but the struggle goes on.

From that standpoint, the Left should be preparing for a battle on two fronts: guarding against the powerful rightwing forces and influences within the Lula coalition while struggling to defeat Bolsonarism. In fact, the second has to come with turning the Bolsonarist base’s distrust of the status quo into an anti-system drive, but the potential anti-system drive has to find an anti-system counterpart in Lulism.

Latin America has been witnessing a series of electoral victories for left forces in many countries. How do you analyse this and what are the challenges ahead for progressive and left forces to ensure a more decisive defeat of the right wing?

Cira Pascual: While it is true there are now progressive governments across Latin America from Mexico to Colombia, from Venezuela to Chile to Brazil to Argentina, we should clarify that these are governments that, for now, are just contemplating reforms within the capitalist system. So, when we compare this “pink tide” with the previous “pink tide” led by Hugo Chavez in Venezuela, Fidel Castro in Cuba, and Evo Morales in Bolivia, we should recognize that the present wave does not have the robust anti-capitalist and socialist direction of the earlier one.

The right in Latin America has a very important ally in US imperialism and, with US backing, it tends to take a fascistic turn. The Latin American Left must step up its anti-imperialist thrust – at the moment some of the progressive governments in the continent are very US-friendly – while combating the magnetism of fascist tendencies with radical policies.

While we see a left wing resurgence in Latin America, in Europe there is a rabid right wing shift. What will be the impact of current political scenario in Latin America on the people's struggle for justice and rights across the world.

Cira Pascual: This question ties nicely with the prior one. Latin America could indeed become a beacon again for the working class, as happened with Chavez and Fidel (and the ALBA project) in the first decade of the century. But, as I was saying before, we need to radicalise the progressive forces that are currently in power. It is hard to imagine that social democratic reforms would become a lighthouse for a global Left and working-class rebellion against capital. Of course, radicalization will not happen if the Left and the working class are not on the street. We have to push for our progressive governments to go from their Left discourse – which we celebrate – to pushing truly anti-capitalist policies. A cautious, overzealous, over-protective Left will actually open the path for the reconstitution of neo-fascist governments.

On one hand we see the US congratulating Lula’s victory, while on the other there is a continuous attempt by the US to intervene in what it considers its 'backyard'. The US is pushing for military intervention in Haiti. How do you look at the current imperialist role of the US in the backdrop of political developments in Latin America?

Cira Pascual: When we think about Haiti, I think it is important to understand that Haitians have been in a permanent situation of anti-systemic rebellion for more than two centuries. In fact, the Haitian Revolution was the first social revolution in the continent. That is why the US and imperialist forces in general have been trying to crush the Haitian people for such a long time.

Now, as we speak, in Haiti there is a rebellion: the people are on the streets in an attempt to overthrow a non-elected president who is a puppet of the United States. Meanwhile, the US is again talking about military “intervention,” which is nothing other than a military invasion of Haiti. Again!

The working classes, the Left forces and the communists of the world have to say, with one voice, “NO” to the US invasion of Haiti. The US continues to impose its will with violent and coercive measures in Latin America. The US has 76 military bases throughout the continent and continues to impose brutal sanctions on both Cuba and Venezuela.

The people of Latin America, however, are waging a robust anti-imperialist resistance, and Fidel and Chávez’s socialist project continues to kindle sympathies around the world.

In the face of the mounting neo-fascist offensive at the global level, we have to rebuild a robust anti-imperialist, anti-capitalist block. There are very important anti-capitalist initiatives in Brazil. The Landless Workers Movement remains a powerful influence. Conditions in Venezuela are admittedly very difficult, but there is a re-emergence of the communes – Chávez’s proposal for socialism –, which shows the emancipatory potential of territorial socialist alternatives. While defending the progressive governments in Latin America against imperialist intervention and neo-fascist destabilisation, as communists we also to continue to push forth and energise the anti-capitalist initiatives on the ground. 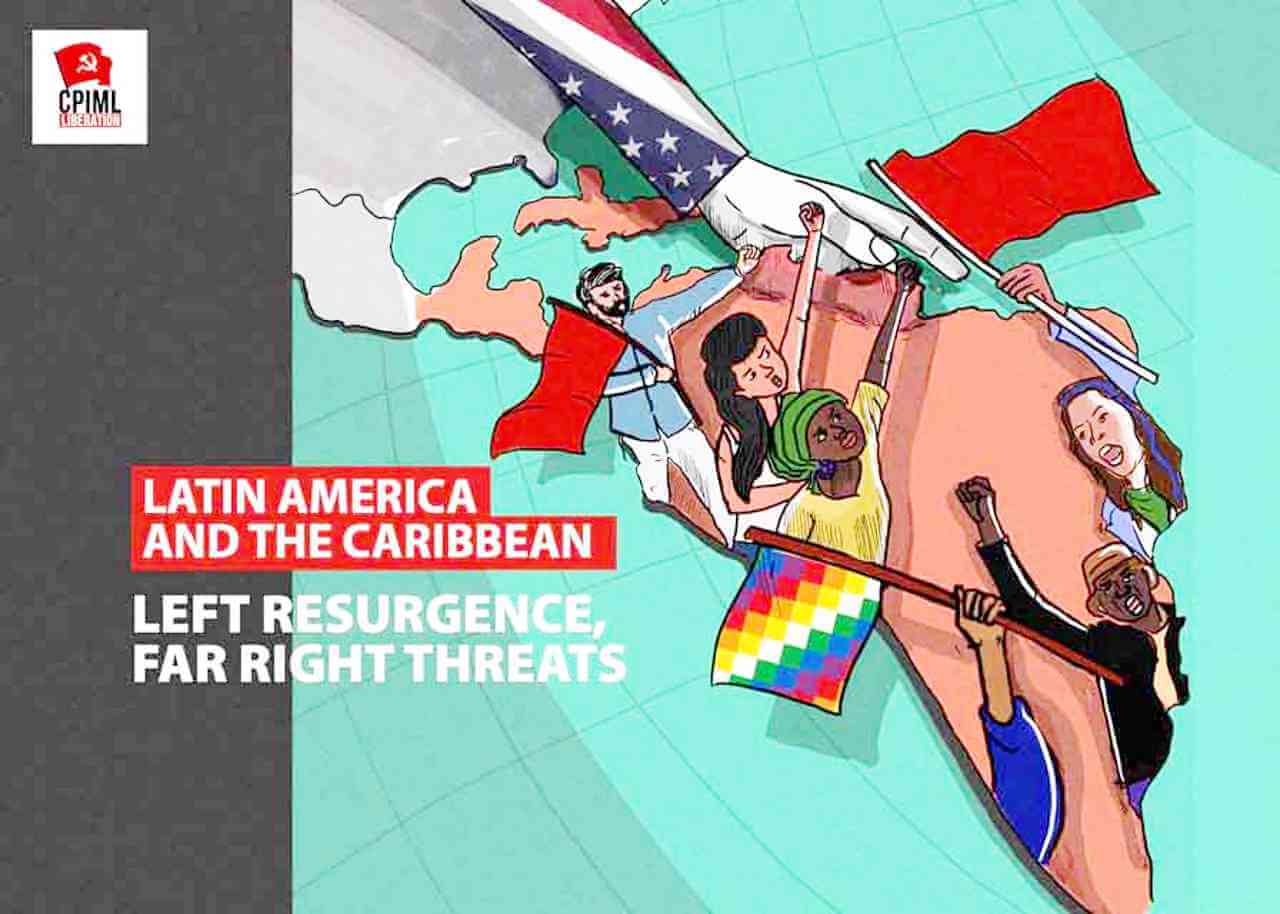 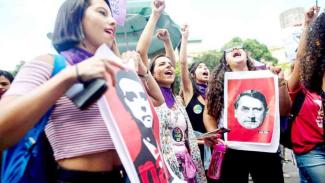