Skip to main content
International 26 December 2022
A Year of Israeli Impunity; A Year of Palestinian Resistance
by BDS India

Another deadly year draws to a close in Palestine as we learn about the death of Palestinian political prisoner Nasser Abu Hmeid due to Israeli medical negligence. Earlier this month 16-year-old Jana Zakarneh was shot in the head and murdered by the Israeli army in Jenin Refugee Camp. Jana is the 53rd child killed this year. At least 222 Palestinians have been killed by Israeli forces in 2022.

One of them was journalist Shireen Abu Akleh, who dedicated her life to highlighting Palestinian voices and who was killed while on duty by an Israeli sniper.

These killings are ongoing along with forced expulsions and creation of illegal Israeli settlements in the West Bank. In May, the Israeli High Court approved the ethnic cleansing of around 1,300 Palestinians living in eight villages in the area of Masafer Yatta. Israel has declared a large part of the area as a military firing zone, and that serves as the pretext for what is going to be the largest expulsion of Palestinians since the 1970s. By expelling Palestinians and bringing in Israelis in illegal settlements, the apartheid regime seeks to fragment the West Bank and deny any future possibility of an independent Palestinian state.

The fragmentation imposed by Israel is not only in relation to the land, but also to the people as a whole. Through a complex system of permits and control of movement, it ensures Palestinians in the West Bank, in Gaza and in Israel are unable to associate, mobilize or even keep up with their families. Palestinians are the only refugees denied their right to return.

A detailed report by Amnesty International launched in February this year argues that since its foundation by the expulsion of Palestinians in 1948, Israel has instituted a range of laws and policies that “ privilege Jewish Israelis at the expense of Palestinians”. They do so by fragmenting the land and people, by dispossession, by segregation and by depriving Palestinians of economic and social rights. This is apartheid.

The report by Amnesty International, as well as other organizations, UN experts and even some states and political parties endorse what Palestinians have been saying for decades: Israel is a Zionist settler colonial, apartheid and occupation regime, and it is able to sustain this through the complicity of states and institutions from around the world.

So how do we end this complicity and support Palestinians in holding Israel accountable?

Launched in 2005, the Palestinian Boycott, Divestment and Sanctions (BDS) movement calls on individuals and organizations to organize campaigns and end institutional complicity with Israel. This non-violent, human rights movement is led by the largest coalition of Palestinian civil society. And today the movement is supported by unions, organizations and many, many people around the world who are in solidarity with Palestine.

In order to end institutional complicity with Israel, we need to first know the extent of such complicity. If we look at India, we know that the current government buys 50% of weapons that Israel exports. This enables the military occupation imposed on Palestinians, the Israeli arms industry that ‘field tests’ weapons on Palestinians, and the killings of innocent Palestinians including children. The weapons imported from Israel include spyware like Pegasus, which has been used against journalists, activists and critics of the current government.

India is also aligned with Israel because Hindutva as an ideology is similar to Zionism, imposed by Israel. Both ideologies are based on supremacy of one community at the expense of other(s). In this sense, if we oppose Hindutva, we must also oppose Zionism or any other ideology of religious or ethnic supremacy. Solidarity with Palestine ties up with defending democracy and secularism in India.

While the US and Europe have historically supported Israel’s crimes, today Israel is reportedly also accumulating diplomatic benefits through arm sales in the global south.

A number of corporations profit from their role in supporting Israel’s apartheid and occupation. In May 2021, while Israel was attacking Gaza, Google and Amazon Web Services signed a $1.2 billion deal with the Israeli government and military. Both companies are going to provide cloud infrastructure to Israel, which means all state agencies and the occupation forces that disposes and kills Palestinians will be using Google and Amazon Web Services’ digital technology to do so. Big tech companies have profiteered heavily from the growing use of digital technology in military and wars.

The Palestinian BDS movement calls upon people like us to pressure their governments to end ties with Israel, to pressure corporations to end contracts with the apartheid regime. And the movement has been successful in not only ending corporate, institutional as well as cultural ties, but also in changing the discourse on Palestine. Palestinians are not victims, they are a resisting people who challenge Israel’s violations of their rights everyday through popular struggles.

In India, the BDS campaign targets Israeli interventions in agribusiness through companies like Netafim that colonize Palestinian lands and sell unsustainable solutions to farmers in India. It has been raising the issue of weapons purchases from Israel including of spywares such as Pegasus and ongoing joint ventures between Israeli arms companies and Indian corporations like Adani. It has been building support for technology targets like HP companies, Google and Amazon among students and IT workers. It has also been campaigning against academic and cultural tie-ups with Israel that cover up its crimes against Palestinians. All of this is being built by mobilizing support among artists and intellectuals, among students, trade unions, farmers, gender rights activists and many more.  Join this campaign to end Israel’s apartheid. 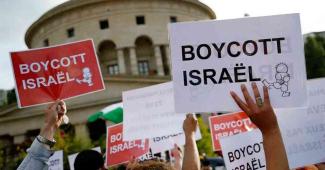