On 1st December, 2021, the ITI’s Management terminated 80 workers, largely Dalit and women, on the sole ground that they have unionized and are fighting for their legal rights. From then, the workers have been protesting day and night at the ITI Gate, Bengaluru under the aegis of the Karnataka General Labour Union, which is affiliated to the AICCTU.

Despite the Minister of Communication, Mr Ashwini Vaishnaw having issued a letter that all the workers who had been removed by Management of ITI would be taken back to service, the Management continues to remain adamant in its anti-worker stance. On 1st December, 2022, on the completion of one year of their struggle, the workers resolved to carry forth the struggle till justice is met. They were joined by various trade unions, Dalit organizations, civil society organizations, women's organization, student organizations who all assured their complete support to the struggle.

The struggle of the ITI workers has set an example for the working class struggles against the slavery of workers through the contract labour system being perpetuated by the Government. The struggle has received support from workers across industries. It has highlighted the issue of the baneful “contract system” which is nothing but a new form of bonded labour. It is necessary that the working class of the country come together to fight against this new form of slavery that is being perpetuated as part of the neo-liberal agenda. 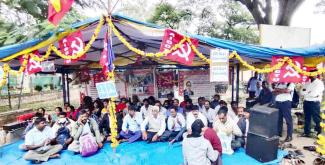