On 21 November 2022, more than 2000 scheme workers from across the country, who are backbone of India's social welfare schemes, including mid-day meal and community health services gathered at Delhi's Jantar Mantar in protest against Modi government's attempts to trample their rights. India’s Scheme workers, viz. ASHA, Mid-day Meal, Anganwadi, and other workers, continue to suffer from remarkably low salary, precarity of employment, and lack of dignity. They are demanding their labour rights, proper wages, rights and dignity.

The protest was organised by All India Scheme Workers’ Federation [affiliated to All-India Central Council of Trade Unions (AICCTU)], which has launched a nationwide campaign to ensure justice and dignity for Scheme Workers, and to demand their rights.

The following demands have been outlined at the demonstration: 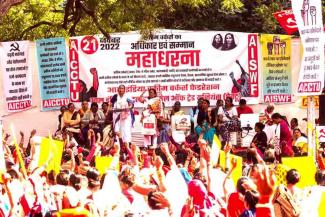