Away from the official hype and propaganda of 'Azadi ka Amrit Mahotsav' the CPIML has a parallel stream of people's campaign to celebrate the 75th anniversary of India's independence and uphold the radical democratic legacy of the freedom movement, remembering unsung and forgotten heroes and their untold sacrifices and resolving to realise their unfulfilled dreams of a peaceful, prosperous, progressive future for all Indians.

The 'We The People' Freedom75 campaign in Tripura held celebrations in Agartala on 7 December in the form of a gathering at Agartala Press Club where descendants of 16 great freedom fighter families of Tripura (Biren Dutta, Prabhat Chandra Roy, Sushil Kumar Dey, Amarendra Deb Barma, Yogesh Chakraborty, Sachindralal Sinha, Umeshlal Sinha, Mahendra Chandra Bhowmick, Tarit Mohan Dasgupta, Sudhanya Deb Barma, Debprasad Sengupta and Pulin Bihari Pal) were felicitated. The celebration committee presented them all with mementos highlighting the text of the preamble to the Constitution of India, which is perhaps the most concise description of the dream that propelled our freedom fighters to sacrifice their all.

Most of these freedom fighters were associated with the Anushilan Samiti, Chattogram armoury raid, the Communist movement and the Congress stream. CPIML General Secretary comrade Dipankar Bhattacharya was the chief guest of this programme. He shared the stage with leaders of diverse non-BJP streams in today's Tripura - Comrade Jitendra Chaudhary of CPI(M), Yudhisthir Das of CPI, Sudeep Roy Barman and Ashis Saha of the Congress, Gopal Das of RSP, noted columnist Biman Dhar, Subrata Bhowmick of Ganamancha, among others.

Comrade Dipankar said that while remembering the glorious legacy of the freedom movement in Tripura we could not be oblivious of the reign of terror currently inflicted on Tripura by the BJP government. Just a few days ago the people of Tripura witnessed one of the most brutal murders perpetrated in broad daylight in the presence of the police. Septuagenarian Shaheed Miyan was clubbed to death for participating in a Left street corner meeting at Charilam near Agartala.

Comrade Dipankar accompanied by Tripura State Secretary Comrade Partha Karmakar and senior state committee members Swapan Banik and Manik Pal, visited the house of Shaheed Miyan on 8 December. His brother Rahim Miyan and other members of the joint family shared their pain and fear and their quest for justice that is today uniting Tripura citizens cutting across political streams in a shared quest for hope and change. Comrade Dipankar called for the non-BJP parties of Tripura to unite and lead this state out of the reign of terror and violence in the coming election. 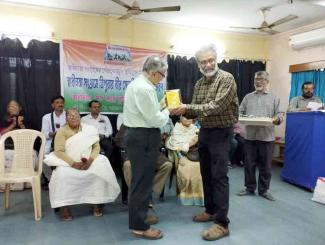