The once sleepy, marshy fisher folk hamlet on the “Sheev” i.e. the border in Marathi (Sion as pronounced by the Britishers) started getting its first immigrants from the migrant labour. They filled up the marshy land and constructed the zopadis as the jhuggies are called in Marathi. The area soon filled up as it was well served by the lifelines of Mumbai- Railway local trains as well as express highways on both the sides.

Dharavi is situated almost in the centre of greater Mumbai. On the West, East, South it is surrounded by higher middle class/elite localities. On the North side it shares its boundary with the Financial, Diamond trade and Banking hub of Bandra Kurla Complex. Ambanis have a substantial presence in BKC. BKC is the last station of the Bullet train coming from Ahmedabad.

With an inordinate population density of 277,136 per Sq. Km in the area of 2.5 Sq. Km, it is home to more than a million people.  On average, 10–12 people live in minuscule homes of 10×10 ft. size situated in narrow lanes. Many are second-generation residents, whose parents moved in years ago. Today's Dharavi bears no resemblance to the fishing village it once was. It lacks water supply, sanitation, roads and decent livelihood.

The Dharavi slum stands on prime urban land. Apart from overcrowded slum pockets, Dharavi is home to several small-scale leather, pottery and textile manufacturing units. Real estate sharks have been eyeing it for some time. Its proximity to the Bandra Kurla corporate complex (BKC) is a major attraction too.

History of Dharavi Rehabilitation and Redevelopment

Before 1971 the slums were demolished. In 1971 the state government passed a law – Slums (Improvements, Eradication and Redevelopment) Act. Under this act, with the help of the Wold bank a program called Slum Upgardation Program (SUP) was started. In 1976 the slum dwellers were given Identity cards after survey and the government started alternate accommodation program. In 1980 the state government decided to encourage formation of co-operative housing societies in the slums and give them land lease rights at nominal rent. Water and sanitation facilities were to be given by the government.

After the failure of the SUP, the government came out with the Slum Rehabilitation Scheme in 1991. The scheme reflected the neoliberal “reforms” and the government withdrew from the responsibility of providing housing and handed it over to the Private/corporate sector.

The new scheme called the SRD scheme gave an floor space index (FSI) - the ratio of permissible built up area to land area-  of 2.5 to the builders. After providing for 180 sq.ft accommodation to the slum dwellers at Rs. 75000 as construction cost rest of the area was to be developed and sold at market price by the developer/builder.

In 1995, then newly formed Shiv Sena- BJP government constituted the Afzalpurkar committee which envisaged the rehabilitation of 80% slum dwellers at the same place. The committee recommendations were accepted by the government and in 1997 onwards the Slum Redevelopment Authority (SRA) was established as the planning authority and has been given the status of an autonomous institution acting as a Local Government Body. In 2004 the government announced the formation of the Dharavi Redevelopment Project (DRP) and stopped the process of registration of the new housing societies.

The entire vision of Dharavi redevelopment project is flawed. Firstly, it ignores the rights of the people who built it – brick-by-brick and secondly, it leaves millions of lives and livelihood at the hands of a mega corporate house that has its history rooted in destroying lives of poor and vulnerable for profit.

After a series of failed tendering process, a 3rd tender began in 2018. In the first extension, Seklink Technology Corporation (STC) allegedly connected with the Dubai ruler submitted its offer. In the second extension Adani Realty made its entry in the process. Setting aside the requirement of 3 offers as a special case the tenders were opened. The base price was 3150 crores. STC with its offer of 7200 crores clinched the deal against the price of 4500 crores by Adani Realty. The Attorney General opined that such inclusion has changed the terms of the tender and hence the tender should be cancelled. Taking umbrage under this opinion the Uddhav Thakre led MVA government cancelled the entire tendering process in 2020.

With the Eknath Shinde – BJP government in power, the Dy. CM and the Minister of housing Fadanvis seized the initiative and declared his intention of completing the Dharavi Redeveloping Project.

And then came the 4th tender! Many terms and conditions, rules and criterion were either changed or relaxed. The extent of experience in the construction field and many other criterion were changed to suit the bidder! The estimated project cost of 27000 crores in the tender released in 2018 was reduced to 23000 crores despite overall huge price increases across the board. The base price for the tender was however reduced to 1600 crores from the earlier 3150 crores in 2018.

The previous winner of the bid, STC did not participate. In fact the conditions of the tender were modified in such a way that their participation is practically ruled out. Of the three participants the tender by the Naman Group was rejected on technical ground and the experienced DLF quoted less than the last base price. Looking at the flow of events the suspicion of a match fixing on behalf of Adani and the whole tendering process being a sham gets strengthened.

A Special Purpose Vehicle (SPV) company will be established for the DRP. The capital of 500 crores will be shared 20:80 between the government and the Adani. In the first 7 years the rehab of the slum dwellers is to be completed. In the remaining 10 years the sale of housing, commercial complexes and other facilities are to be completed. With Adani calling the shots they will dictate the terms and the government can practically do nothing about the quality, priority timeline and planning.

The DRP is accorded a status of Vital Public Project and granted many concessions to the developer. There is no Cut Off date / datum line set for the Dharavi residents cleverly leaving scope for their elimination from final lists. In similar projects in Mumbai like MUTP and MUIP this condition was followed and houses allotted to all dwellers on ground at the time of the survey. Three surveys have already taken place but still a 4th surveyor is being appointed. This also is a clever ploy to deny houses to the dwellers under some pretext or the other.

Adani entered Maharashtra and Mumbai with purchase of Reliance energy TPP at Dahanu and the distribution network in Mumbai suburbs. They have subsequently made inroads in the high end realty sector. They have applied for distribution licences in some districts in MMRDA region of Maharashtra including MSEDCL areas in Mumbai and Navi Mumbai. With Mumbai port on the monetization anvil and a new port coming up at Vadhvan they are likely to grab the same. They have already grabbed the Mumbai International Airport. Furthermore, as per the reports, the state has announced a floor space index (FSI) of 4 for the redevelopment along with a range of concessions including the premium paid by the developer, inspection charges, GST among many others.

The vertical slums which will come through have been found to be lacking on illumination, fresh air, and community spaces and unaffordable as the maintenance and electricity charges are steep. They are inferior in quality and are offered at the most neglected and inconvenient area of the project. The migrant labour and the people with no documents/ falling beyond cut-off date will lose shelter and livelihood. The home industry and other industries in the area will be shut down. Moreover Adani being the developer there are apprehensions that no cognisance will be taken of any deviations and coercive arm twisting will be resorted to manufacture consent of all kinds. 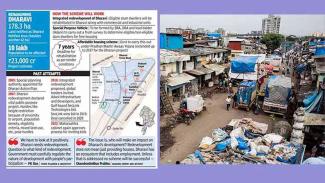