On 16 September, the day before the 72nd birth anniversary of Narendra Modi, his closest capitalist friend Gautam Adani had briefly become the world’s second richest person according to Forbes’ Real Time Billionaires List before being pushed back to the third position. With a net worth of $152.2 billion, his closest global rivals are French business magnate Bernard Arnault and American entrepreneur and founder of e-commerce platform Amazon Jeff Bezos, while American entrepreneur and CEO of electric car manufacturer Tesla, Elon Musk stays put at the top of the list with a net worth of $273.2 billion.  Adani is now the richest Asian and within India he has left Mukesh Ambani way behind at the second spot trailing him by more than $50 billion.

Starting as a commodity trading firm in 1988, the Adani group today has grown into India’s biggest infrastructure conglomerate with interests ranging from ports, SEZ, roads and airports to energy, gas, agribusiness, warehousing and what not. This phenomenal rise in Adani’s economic fortunes can only be compared to the rise in Narendra Modi’s political fortunes and indeed the two have happened over the same period and in ever closer collaboration. Modi became Gujarat Chief Minister after the 2001 earthquake and Adani started growing big by grabbing assets and resources in the course of Gujarat’s post-quake reconstruction. When after the 2002 Gujarat genocide Modi was criticised by CII leaders, and banned from entering the US and UK, Adani invested massively in the Vibrant Gujarat Summit of 2003 in which corporates rehabilitated and lauded Modi as the potential ‘CEO of India’. This has been described as a key turning point for Adani, who started receiving huge and exclusive concessions from the Gujarat government. The Adani empire started growing exponentially around the Mundra port, now India’s largest commercial port.

In 2014 Modi used a fleet of Adani jets and helicopters for his election campaign and his arrival to Delhi from Ahmedabad as Prime Minister-designate in an Adani jet announced to the whole world that crony capitalism in India had reached an altogether new level. Since then banks have poured in money to fund Adani’s aggressive expansion while the government has done everything possible to promote Adani’s expansion not just within India but also abroad. Adani now mines Australian coal with Indian bank loans and sells that coal back to India. We now also know how the Adani group was awarded wind power projects in Sri Lanka. On March 30, 2014 before the advent of the Modi era, Adani’s wealth was $4.5 billion, more than doubling to $11 billion in January 2020 and jumping exponentially during the pandemic to $76.7 billion in June 2021 and now at above $150 billion in September 2022.

This thirty-fold growth in eight years is the result of the most brazen variety of crony capitalism where the state is unscrupulously transferring public assets and resources to the Adani group, enabling it to secure a huge monopoly over core infrastructure areas and a vicelike grip over India’s foreign trade thanks to the group’s growing exclusive control over India’s ports, airports and road and rail communication. The Sangh-BJP camp would like to brush this under the carpet by projecting Adani as a great wealth creator and job generator, thereby presenting the Adani growth story as the India growth story under Modi. But every economic indicator from India’s plummeting GDP growth to the alarming rise in unemployment, poverty, hunger and malnutrition exposes that propaganda as a blatant lie and cruel insult to the people of India.

It is corporate growth which has come at huge social and environmental cost, and worldwide we now therefore see growing #StopAdani protests against the group’s plundering projects, grabbing of indigenous people’s land, and hypocritical attempts to greenwash its plunder by projecting itself as promoter of renewable energy and the art and culture of indigenous peoples. Increasingly it is also becoming clear that the miraculous growth of Adani is a debt-funded bubble and when the bubble bursts it may well trigger a massive financial crisis in India like the collapse of financial giants in the US. The growth in Adani group’s net worth is primarily because of its aggressive debt-driven acquisitions in diverse sectors and the surge in the group’s share prices which does not have much direct relation with the group’s revenue earnings. A comparison between Amazon and the Adani group for example shows that while the net worth of the two is on the same level, around $150 billion, the revenue of the two stands far apart at $486 billion and $29.2 billion.

The Modi regime today represents unbridled centralisation of power while the Adani empire epitomises unprecedented concentration of wealth. The popular description of crony capitalism as Adani-Ambani Company Raj aptly summarises the true character of the Modi government as the government of the super-rich, by the super-rich, for the super-rich. For democracy to survive, India will have to unseat the Modi regime and break this growing corporate stranglehold over the Indian economy and polity. 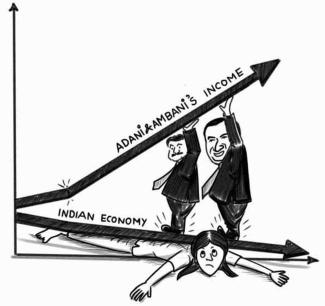