Skip to main content
Fact Finding 01 January 2022
Who Will Benefit From the Kharawshrotaa Mega Project?

A Report from an anti-Adani Struggle in Odisha

For the last two years the people of Aali and Rajkanika blocks in Kendrapara District have been up in arms against the project of the Odisha Govt to supply water to the port of Dhamra located in the adjacent Bhadrak District and the drinking water to residents of Bhadrak District from the Kharawshrotaa river. In more ways than one the river forms the lifeline of these two blocks. Along with these two, the blocks of Patamundai and Rajanagar also depend on the river for agriculture and drinking water. To understand the anger and resoluteness of the movement against this it is important to understand the particular geographical lay of the area and the history of the relationship that people have with the river.

The Kharawshrotaa river is a tributary of the Brahmani River. It flows away from the Brahmani at Jenapur in Jajpur district and re-joins it just before the Brahmani flows into the Bay of Bengal. As a result of this, the volume of water flowing in it is totally dependent on the flow of water in the Brahmani. The Brahmani is one of the three rivers whose combined deltas make up the Bhitarakanika National Park, which after the Sunderbans is the only mangrove forest in South Asia. The rivulets around the forest are also home to endangered salt water crocodiles along with other flora and fauna. It’s been only one and a half decades that a bridge was built on the Kharawshrotaa river and the area was connected with all-weather roads with the district headquarter.

The areas around the river have been flood prone. Floods resulted in water logging which affected the rabi crops, they were devastating for the kharif crops and also brought much death and destruction of human life in their wake. The whole district of Kendrapara is hit by cyclones nearly every year. As a result, for those practising agriculture livelihood has been perennially uncertain. Such prevailing conditions have meant that there is substantial migration from this region to other parts of the state and to other states in the country for employment. Even after Independence the region has been the victim of negligence and govt apathy. No attention was paid for the first two decades of Independence for instituting flood control measures and providing safe drinking water facilities to people in the region. In 1969 the region saw the first organised movement demanding flood control, measure to stop sea water entering the river and electricity. The movement was led by the Praja Socialist Party. It was a widespread movement which saw large scale participation of farmers, women, the young and the old. Many were arrested but the strength of the movement ensured that the Odisha govt. came to the negotiating table and as part of the agreement to institute flood control measures it committed to the construction of the Rengali Dam in Angul District which was upstream on the Brahmani River.

But the construction of this dam did not have any benefits for the people in Aali and Rajkanika. The water and electricity from the Rengali Dam went to the mines and industries in Angul and Kedhujhar districts. In the meanwhile, due to the dam upstream the flow of water in the Kharawshrotaa dried up completely in summer and the water became salty due to the lack of any measure preventing sea water from entering and the low volume of fresh water in the river. This had other side effects too. Ground water started to become saline. The South canal from the Rengali Dam which was supposed to supply water to Aali and Rajkanika remained a pipe dream. Every 10-15 years the Govt came up with a proposal which would adversely affect the lives of the people living along the Kharawshrotaa, this has led to the growing realisation among the people that the only way to secure their lives and livelihood is to protect the river.

In January 2020, it was out of the blue that the Govt of Odisha announced the construction of the ‘Kharawshrotaa Mega Project’ and construction equipment and vehicles turned up at one of the ‘ghats’ of the river. Immediately people of the two Panchayats near the ghat convened an all-party committee to oppose the construction of this project.  On the initiative of Com. Bidhan Das of the CPI ML who held mike meetings across Aali and Rajkanika a renewed ‘Kharawshrotaa Banchao Sangharsha Samiti’ (Save Kharawshrotaa Struggle Committee) was formed. On February 12 the committee held an open convention which saw wide participation from all sections of the society, a resolution was passed demanding the Odisha Govt to stop the Kharawshrotaa Mega Project. On 8th October after the first wave of Covid the contractor again tried to start construction but work stopped as women bravely put themselves in the path of the JCBs, trucks and other vehicles. This movement has generated wide solidarity and support from activists from all across the state of Odisha. The official claim of the govt is that the megaproject will provide drinking water to four blocks of Bhadrak district. This claim is baffling because Bhadrak district itself has two major and other minor rivers flowing through it. There has been no consultation with Gram Sabhas or other elected representatives while planning the project. There has been no effort from the Govt to address other pressing issues related to the Kharawshrotaa river, like it virtually drying up during the summer months but it is in a hyperactive mode to implement this mega project. Lack of safe drinking water has been a long-standing problem in Kendrapara district but there has been no effort from the govt to address this.

The real reason for this megaproject is not somewhere the Govt wants anyone to look. The Govt of Odisha is going to provide water from the Kharawshrotaa to the Dhamra Port, which though in Bhadrak District is geographically close to Rajkanika. The port is owned by Dhamra Port Company Limited (DPCL), a fully owned subsidiary of Adani Ports. The Govt of Odisha is spending nearly 1000 crores to supply fresh water to the Adani’s port in the name of supplying drinking water to the people of Bhadrak District. The Govt is desperately trying to portray that the movement to save the Kharawshrotaa River is an attempt to deny the people of Bhadrak drinking water! This is far from the truth. As we mentioned earlier there are major and minor rivers in Bhadrak from where water can be tapped. If the Adani port at Dhamra needs water, why can’t it set up a desalination plant to tap sea water? Why destroy the lives and livelihood of those who depend on the river.

The project will also adversely affect the Bhitrakanika National Park. Till date there is no assessment of the effects this project will have on the mangrove forests which are critical in acting as a natural barrier to cyclones which hit this part of the eastern coast with increasing frequency. The reduction of flow of fresh water in the river will also mean an increased volume of salt water flowing into it from the sea. This is also starting to show its effects. Of late there have been instances of salt water crocodiles coming up the river up to Aali giving rise to incidents of human animal conflict.The movement has predictably been met with repression by the Odisha Police. Many large democratic protests have been declared illegal through the imposition of section 144 CrPc and false cases have been foisted on leaders and activists of the movement. The major demands of the movement are as follows:

The Naveen Patnaik led BJD Govt is more than happy to follow the lead taken by the Modi Govt in selling off our natural resources to Modi’s favourite capitalist friends, Adani and Ambani. Even though the BJP in Odisha is on paper opposing the project it is silent on the real intention behind the project which is basically to provide clean water to the Adani owned port in Dhamra.

This movement has now gained widespread support across the state. It is imperative that all progressive movements who are fighting against the subversion of democracy by the Modi Govt through a corporate communal nexus must stand in shoulder to shoulder with the ‘Save Kharawshrotaa Manch’. The CPI ML and its activists are active participants in the movement. Com. Bidhan Das from our party is one of the leading activists and leader of the joint platform. At a time when critical infrastructural and communications and transport infrastructure like railways, airports and ports are being handed over to Adani on a platter by the Modi Govt. the people of Aali and Rajkanika need all our solidarity and support in this crucial battle for saving the river and securing their livelihoods. 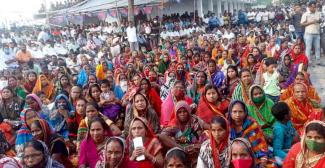