Skip to main content
Cover Feature 24 November 2022
WHY WAS CHILE'S NEW DRAFT CONSTITUTION REJECTED?
After years of consistent protests by people's movements in Chile, a new draft Constitution, with several progressive provisions, was prepared to replace the Pinochet dictatorship era Constitution. During the first referendum held in October 2022, the new draft Constitution, received more than 60% approval votes, but in the second referendum held in September 2022, the proposed text of new Constitution was rejected by a majority. Below is a note on the situation by Sergio Reyes, a social and political activist from Chile.

On October 25, 2020 Chileans had voted overwhelmingly to write a new constitution and to have a Constitutional Convention with more than 150 members, with gender parity, and reserved posts for representatives of indigenous nations. Traditional parties from right and left and their “centre” wings didn’t do too well, and a new group of independent, progressive, grassroots, people made it a success.  Right wings and centrists were appalled, and begun working hard to derail this process. In fact their representatives in the Convention were there just to torpedo the process. In the middle of it all there were presidential elections. On the right, a fascist, Antonio Kast, on the left, a young progressive, critical of the center left that administered the state inherited from Pinochet. Up to this point, voting in Chile was voluntary.

After a year of work, and with a new administration in The Moneda Palace, headed by Gabriel Boric, the convention finished their work, with a series of grassroots consultations, with many of these spaces also hijacked by right wings operatives and people paid to support their position. The resulting constitution proposal contained progressive language that would have changed the system from a neoliberal capitalist system, to what I call a progressive enlightened capitalism. This included gender equality, plurinationalism, a full catalog of social rights, and environmental rights. This was too much for conservatives on the right and the center left to tolerate and they set to destroy the proposal. A key move was the rush to change voluntary participation in voting to mandatory. This added nearly 40% more people who never voted voluntarily. The majority of people did not read the constitution proposal, even though this was distributed freely by the government. Those who favored the option “Reject”, planted a few slogans such as “this is a bad constitution.” “They are after our money.” “They will expropiate your property”. “This is communism”. “This will destroy our country.” Yet, one the elements that was resisted the most was the concept of a “plurinational state”. Chilean racism was cleverly tapped by right wing propaganda experts indicating that “Indians will be better off than us Chileans.”

In the end, percentage wise the voting was reversed from a first plebiscite where more than 60% voted to change the constitution to more than 60% voting to reject the changes proposed, on the second plebiscite. Again, the apathetic non-voting sector of the population turned things around. The hard votes from the first plebiscite didn’t change much. Now professional politicians have regained control of the constitutional process and are negotiating how to move forward to create a constitutional body that will probably have minor changes from Pinochet’s constitution. The tide after the voting of September 4th has changed in favor of the right-wing, feeling empowered. This is then classic fascism, extreme right wing ideas in action with peoples support. 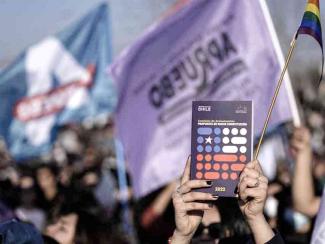