Comrade Arjun Lal was released from jail on 20 September. He was arrested last month in Hargaon, in Sitapur district of Uttar Pradesh for standing with the dalits demanding justice against atrocities committed by upper caste goons. When he went with the dalit families to the thana to lodge a first information report, the police in connivance with the perpetrators arrested him and many others.

CPIML had launched a statewide campaign against this incident demanding punishment to the police and other administrative officials who are part of Yogi government protected caste atrocities as a systemic phenomenon in UP. Even as Yogi government continues to escalate an atrocious caste and communal divide in the state, the CPIML has reiterated its resolve to intensify struggle for the rights of dalits and tribals in the state. 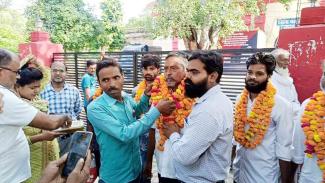