Skip to main content
International 24 May 2022
The Return of Marcos in the Philippines: A Challenge to Peoples Power

The result of the May 8 presidential elections in the Philippines was an unimaginable tragedy for many who survived the decade long brutal dictatorship regime of Ferdinand Marcos (Marcos Sr). Ferdinand “Bongbong” Marcos Jr or simply known as Marcos Jr, son of Marcos Sr managed to win the elections by securing nearly 30 million votes in his favor. He received backing from the outgoing authoritarian regime of Rodrigo Duterte through his daughter Sara Duterte who has been elected as the vice president.

The United States-backed Marcos Sr’s regime from 1965 to 1986 (with martial law in place from 1972 until 1981) had been one of the most brutal period in the history of the Philippines. The period was marked by widespread torture and extrajudicial killings of political opponents, trade unionists, Muslims and anyone who questioned his dictatorship. Furthermore, corruption and extravagance was at his peak with more than US$5 billion–$10 billion stolen from government treasury by his family.

On 25 February 1986, Marcos was forced flee the country to Hawaii with his family after the People’s Power Revolution, a series of mass demonstration against his regime. Never Again! became the rallying cry of the 1986 revolution.

The Marcos family came back to the Philippines after 1990s to face the corruption charges and his family started involving themselves once again in the political landscape. Today, decades later, with victory of Marcos’ son, the Marcos family is once again regaining impunity and power and wriggling out of paying its dues.

Though the result is a shock, but not completely a surprise. According to observers, for three decades the family have been taking advantage of the information vacuums left by uncritical history textbooks about the martial law period. Marcos Jr’s campaign was focused on historical negation of the dictatorship crimes and whitewashing his fathers’ brutal regime.

The Philippines under the outgoing Duterte regime has already been witnessing rampant state sponsored attacks on democratic voices, red-tagging (term of witch-hunt against communists) and widespread extrajudicial killings under the name of ‘war on drugs’ campaign. The emergence of Marcos-Duterte regime in Philippines now threatens to push the country back to dictatorship. 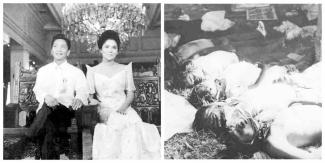