The Justice VS Sirpurkar Commission has submitted its report to the Supreme Court on encounter murders on December 6, 2019 against four accused of raping and murdering a young doctor in Hyderabad. The commission confirmed four teens were shot intentionally by the police with the clear understanding that it would lead to their death. She also said the accused did not grab any weapons from the police party, hence the argument that the shooting was for 'self-defense' was false.

The four boys - Mohammed Arif, Chintakunta Chennakesavulu, Jollu Shiva, Jollu Naveen – two of them 15-year-olds, three of them minors from a backward Valmiki Boya tribe – were picked up from their homes, and killed. There is no evidence to link them with the crime of rape and murder. Their murder was committed only to cover-up the crime of the rape and murder, and protect the real culprits, including the police officers who refused to act the previous night to rescue the woman while she was making distress calls.

We congratulate the 15 feminist and civil rights activists from Telangana who approached the court for justice and Advocates Vrinda Grover, Vasudha Nagaraj, Sautik Banerjee who voluntarily argued the case on behalf of social activists before the Supreme Court, Telangana High Court, and the Commission of Inquiry.

AIPWA had, in December 2019 itself, strongly declared that the fake encounter can only be counterfeit ‘justice’ for the crime of rape. The concerns raised by AIPWA and other feminist groups then stand vindicated now. 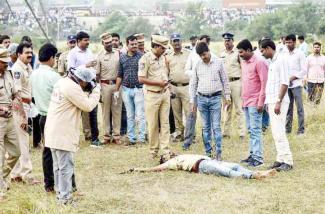