On 20 January, people’s movements all over Odisha observed Dhinkia Solidarity Day - a statewide protest against the Modi and Naveen government in support of villagers of Dhinkia village in Jagatsinghpur District, who are facing a brutal police crackdown for protesting the forcible acquisition of more than thousands hectares of land for a project of the Jindal Company.

Dhinkia and nearby villages near the Paradeep port is the same area where the people fought a decade long battle and forced the POSCO to withdraw its plans for setting up an Iron and Steel Plant. This time around they are fighting to save their life and livelihoods from the proposed steel plant project of Jindal Steel Works (JSW), a project for which no statutory clearances have been obtained. The Odisha police has been camping outside villages for over a month and harassing residents entering and exiting the village.

On the afternoon of 14 January, Odisha Police personnel started destroying betel vines around the village. This was done without the consent of villagers. This led to a large procession of residents of Dhinkia and other villages confronting the police and physically protecting the vines. The Odisha Police responded with a brutal lathicharge injuring about 30 people including women and children. They also arrested activists and leaders of the Jindal Pratirodh Sangram Samiti (JPSS). Many villagers are also reported missing. The arrested activists were produced at around 2:30 AM in front of the local magistrate and sent to judicial custody. A team consisting of AIPF National Council Member and CPIML leader Mahendra Parida and well-known activist Prafulla Samantaray tried visiting Dhinkia on the 15 January but they were not allowed to enter the area by the Odisha Police. They met the local SP and demanded that all cases on activists be withdrawn and they be released immediately. A central CPIML team including the Politburo member and MLA from Bagodar, Jharkhand, Comrade Vinod Singh, is will soon be visiting Dhinkia in solidarity. 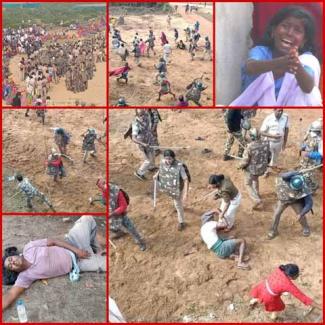