West Bengal now a days is churned with students youth agitation against recruitment scams depriving deserving job aspirants in various government appointments. Corruption at many levels have gradually surfaced in appointments of teaching and non-teaching, Group C & D, and nursing staffs. Hundreds of eligible candidates have been denied jobs despite of being included in the merit list while the ineligible candidates are appointed in exchange of bribes of lakhs of rupees. Close relatives and associates of ministers and leaders of TMC governments have been found to be given illegal appointments. The prolonged struggle of thousands of deprived and betrayed applicants have exposed the rot in the recruitment process and led the movement for justice to the present juncture. The protests, legal battle and the movement continued despite of police repression, administrative obstacles and disruption caused by the pandemic and Assembly elections. It is this determined relentless struggle of deserving but deprived youth which is behind the High Court verdict ordering a CBI probe into the massive irregularities and brazen manipulation in the School Service Commission recruitment process followed by recovery of crores of cash and arrest of the ministers, bureaucrats, chairpersons of the recruitment boards and other officials by ED and CBI. Interestingly, none of the former TMC leaders presently in BJP have been taken under any investigation regarding their involvement in these scams.

Despite of this blatant corruption in recruitment, the TMC government still has no intention of providing justice to eligible but deprived candidates. Initially after the protest started for fair SSC recruitment, the CM assured the protestors to correct all anomalies and ensure prompt recruitment of all according to the merit list. But in reality, the TMC government did not comply with their commitment and made yet another round of selective and faulty recruitment. Moreover, the government has repeatedly used its police administration to brutally suppress the just movement of the job seekers against this corruption. The candidates most of the time had to approach the Court to seek permission for protest demonstrations. The peaceful sit in protest of Yuba Chhatra Adhikar Manch, (a platform of deserving SSC aspirants) at esplanade, Kolkata has reached to 650 days now.

RYA from the beginning was a part of this movement and actively involved in formation and functioning of Yuba Chhatra Adhikar Manch. We have always advocated for unifying all those voices struggling for their rightful demands and justice. A united rally jointly organized by 9 different platforms of job aspirants on 19th December from Sealdah to Esplanade was participated by thousands of students youth demanding direct meeting with the Chief Minister and immediate appointment. RYA has played the role of catalyst in forging this unity of almost every platform formed against corruption at various recruitment processes. The administration denied the permission for this march and the aspirant youth had to move to the Court to exercise their fundamental democratic right to protest.  The 9 platforms who jointly called for this united rally were: WBGDRB-2017 Group-D Waiting Oikya Manch, Yuva Chhatra Adhikar Manch (IX-XII), West Bengal Progressive Nursing Forum (WBPNF), Yuva Chhatra Adhikar Manch (Physical Education and Work Education), WBCSSC Group C & D Waiting Job Aspirants Forum, 2014 TET Pass Oikya Manch, 2014 PTET Qualified Trained Not Included Candidates Ekta Manch, Madrasa Service Commission Pass Candidates Manch and 2018 College Service Commission Empaneled Candidates Organization. Along with the job aspirants hundreds of citizens and activists also joined the rally.

“Legal battle must continue to punish all the perpetrators, but the utmost need of the hour is to give justice for the deprived candidates who have been the direct victims of this scam and have lost many valuable years from their lives”, said one SSC aspirant protestor. The state government must ensure immediate and fair recruitment of all deserving candidates. The government and legislation must take necessary steps to resolve all legal complications regarding creation of supernumerary posts to provide appointments to deserving job aspirants in every sector. “All sorts of corruption in recruitment need to be stopped. We have to come to the streets to seek what is rightfully ours. We will not allow anyone to use us for petty vote politics”, they said.

Recruitment and admission scams denying employment and higher education opportunities to deserving candidates have become a sordid reality in today's India. The revelations have reignited the popular discontent in West Bengal against the TMC misrule. The BJP clearly seems to have discovered a huge opportunity to fish in the troubled waters of the state. In BJP-ruled states such scams are being systematically hushed up and agitations crushed with brute force. The infamous Vyapam scam of Madhya Pradesh is the most shocking example where scores of whistle-blowers and witnesses have been physically bumped off to suppress the pursuit of justice. The students and youth of West Bengal have set an example to fight such deep rooted scam with all determination and perseverance. All support should now be extended to them to secure an emphatic victory over this massive scam and systematic subversion of the rights and dreams of young Bengal. 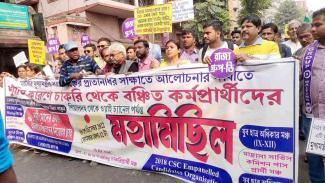