The results of the Assembly elections in Gujarat and Himachal Pradesh and the municipal elections in Delhi have been on predictable lines, except the scale of the BJP’s Gujarat victory which surely merits a close scrutiny. The BJP was the party in power in all the three elections, and it has now lost power in two of them. In this sense, the BJP is a net loser, but the loss clearly lies overshadowed by the scale of its victory in Gujarat in terms of both vote share (above 52 percent) and seat share (above 85 percent). We must also note that in Himachal and Delhi where the BJP lost, it finished a close second. The Congress suffered an unprecedented jolt in Gujarat, its tally dwindling from 77 to 17, but it succeeded in wresting Himachal Pradesh from the BJP, albeit by a slender margin. AAP’s real gain is its victory in the MCD elections and also its new-found status as a recognised national party.

The BJP is now busy downplaying the significance of its defeat in Himachal Pradesh and MCD, but everybody knows that the BJP had left no stones unturned to win these two elections. In Delhi, the party was aware of the growing public anger against its non-performing fifteen-year-long tenure in the corporation and hence it resorted to a series of manipulations to retain its grip over the MCD.  Ever since the Modi regime came to power in 2014, it has been trying to reduce the Delhi state to a glorified municipality, sandwiched between an aggressive Central government and a parallel municipal power. To elevate the status of the municipal power vis-a-vis the state government, the three corporations were centralised into a single entity and its wards reconstituted through a delimitation plan drawn up clinically to improve the BJP’s electoral prospects. The election schedule was also manipulated to the hilt, with the dates suddenly announced on a short notice to coincide with the Gujarat elections.

The BJP also employed all its financial resources, administrative power, communal vitriol, propaganda blitzkrieg and so-called Modi charisma in all these elections. The defeat of the BJP in Himachal and Delhi has to be understood against this backdrop. Aware of the dissension within the party and the number of rebel candidates in the fray in Himachal Pradesh, Modi openly sought votes in his own name. Yet, the angry electorate of Himachal made sure that the BJP was voted out. Himachal is the home state of BJP Pesident JP Nadda and the hate-mongering high-profile Modi minister Anurag Thakur. The plight of Himachal’s apple farmers, who are reeling under the combined pressure of increased apple imports and GST on apple packaging; the growing demand of government employees everywhere for restoration of the old pension scheme: and the simmering anger of the youth against the Agnipath scheme that has deprived the youth of the opportunity of seeking a secure future in the army – these real issues prevailed over Modi’s empty rhetoric and the BJP was voted out.

The Gujarat results clearly stand in sharp contrast to the poll trends witnessed in Himachal and Delhi. How can we explain this intriguing contrast given that the BJP has already been in power in the state for 27 years? In the Modi era Gujarat is of course the BJP’s strongest bastion. It is not only the Sangh brigade’s biggest communal laboratory, it is also the Adani-Ambani home state and just ahead of the election Modi managed to announce some big investment projects in Gujarat at the cost of Maharashtra. The Congress, weakened by a series of desertions, especially that of the 2017 election star campaigner Hardik Patel, ran an incomprehensibly low-key campaign. The AAP took full advantage of the situation and buoyed by its encouraging showing in municipal elections in Surat and its spectacular victory earlier this year in Punjab, it tried its best to project itself as the upcoming challenger to the BJP’s continued rule. The AAP votes came clearly at the cost of the traditional Congress base, especially in the tribal regions of Gujarat and the BJP benefited immensely from this division in non-BJP votes.

The division of non-BJP votes cannot however explain the intriguing increase of 5 percent votes in favour of the BJP. The issue of last hour surge in polling, especially in the second phase, raises serious doubts and the Election Commission of India must probe this issue and come out with convincing answers. More than 16 lakh votes have reportedly been polled in the last hour on December 5, marking a 6.5 percent spike on an average and even more than 10 percent hike in some constituencies. There were no physical signs of long queues outside of polling booths, yet EVM figures recorded a jump suggesting polling of votes at intervals as short as thirty seconds!

Like the last-hour surge in votes in Gujarat, attention must also be paid to the extremely low polling in Muslim-dominated booths of Rampur in the UP bypoll which made a BJP victory possible. The threat to disenfranchise Indian Muslims, boastfully issued by BJP leaders every now and then, was effectively at work in this UP bypoll, giving us glimpses of the BJP game plan to systematically weaken the Muslim presence in India's legislative arena, as voters and certainly as legislators. Indeed, with the Election Commission being packed with handpicked bureaucrats, which as the Supreme Court has noted has extremely adverse implications for the integrity and autonomy of the institution and the conduct of elections giving rise to doubts about the integrity of the polling process itself, the credibility of India’s electoral system is increasingly coming under a cloud.

Reports coming from Gujarat already signal desperate attempts by the BJP to engineer defection among AAP legislators, several of them having been associated with the BJP in the past. The AAP may have grown till now primarily at the cost of the Congress, but now that it has grown up as a national party, it will be taken seriously only if it has the will and strength to stand p to the BJP’s fascist aggression. The Congress has done poorly in Gujarat, but the hard-fought victory of Jignesh Mevani holds encouraging signs for all those determined to build a powerful people’s resistance against the communal fascist aggression of the Sangh brigade. There are important assembly elections scheduled next year – from Tripura in the north-east to Karnataka in the south, India will have to deliver several blows to dent the Modi regime before voting it out in 2024. 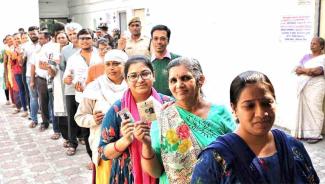