Tamil Nadu state unit of the CPI(ML) Liberation held its 11th conference on 25 - 27 November 2022 at Trichy, the central part of the state. More than thousand people and conference delegates attended the open session with full of vigour and vitality.

Comrade Dipankar gave a clarion call not only to overthrow the BJP from the central power but also to eradicate the fascist forces from the soil of Tamil Nadu. The mobile technology today is 5 G but the politics of the Modi government is 5 C. The Modi government says that they are for only one C, that is Cultural Nationalism. But, when you decode that C, it turns out to be 5 Cs. Caste, Communalism, Corporatism, Centralisation and Colonialism (and its repressive legacy) are the 5 Cs of the Modi led BJP government. The first C, the Caste which is an impediment to the progress of the society is being reinforced by the party in power while Ambedkar called for annihilation of caste back in 1936 itself. The Modi is annihilating reservation, an instrument of social justice, by introducing 10 percent reservation for EWS to protect the forwards. The second C is the communalism. Right from raising the issue of Mathura to Srirangapatna in Karnataka, the Modi government is trying to whip up communal frenzy and hate. The third C is the Corporatism. The Modi led BJP government is all towards handing over the entire country to the hands of corporate companies. One nation, one religion, one language, one culture, one food habit, one dress code - is the kind of centralisation the Modi government is attempting against the country’s unique nature of diversity and pluralism. It is bulldozing the diversity. This over centralisation is the fourth C. The fifth C is that the BJP has emerged as the Symbol of the repressive legacy of Colonialism. They are doing everything to bring colonialism back in India. They consider themselves to be the successors of colonial rule in the past. This is what Comrade Bhagat Singh precisely warned against. He said that the power should not be transferred from white sahebs to Brown Sahebs but the same is happening in India today.

The 5 Cs, Comrade Dipankar said, added up to a sixth C, the Calamity, that Ambedkar warned us about. Draconian laws are being used to suppress the dissent and the protest. The democracy is being systematically subverted to give way for the rise of fascism. The well-known intellectuals are being branded as ‘Urban Intellectuals’ and are sent to jail. Our C is the constitution that advocates pluralism, secularism and democracy which promises liberty, equality and fraternity. We should build people’s unity to fight against the systematic destruction of the constitution. The people are fighting back by rallying around the spirit of the Constitution and the rights promised therein. Greater unity, more struggles, more power to the people, more battles of farmers, youths and students are the need of the hour. Comrade Dipankar ended his speech calling upon the people to build a powerful anti-fascist resistance in the country and in the state of Tamil Nadu.

Comrade Thol. Thirumavalavan of VCK (Liberation Panthers Party) said that the BJP is not just another political party but a fascist party that aims to disfigure the secular complexion of the Indian state and to replace Indian constitution with the Manu Smriti of the barbaric era. He referred to the tactics of annihilation used by the saffron forces to kill writers and intellectuals like Gowri Lankesh, Kaluburgi, Govind Pansare, etc. He assured all possible cooperation to CPIML and other Left and democratic forces in the battle against the fascist forces of RSS-BJP and for democracy in the country.

Comrade Balakrishnan, the state secretary of CPIM said that 11th conference is the first ever state conference of CPIML that he attended which means, in the recent period, the Left forces are working shoulder to shoulder and more closely all over the country and also in Tamilnadu. He asserted that the very presence of Left parties, VCK, MMK and Makkal Adhikaram (People’s Power) on stage displayed the determination to come together in the fight against the right-wing forces in the state. He appealed to all Left and democratic forces to look for aspects of unity to wage a powerful struggle and to forge solidarity in struggle.

Comrade Mutharasan called the Modi as liar citing his utter lie in the Tamil congregation of Varanasi where Modi shed crocodile tears about protecting Tamil language while, actually, promoting only sanskrit and Hindi by spending hundreds of crores of rupees.

Comrade Abdul Samad, the General Secretary of Manithaneya Makkal Katchi (the Humanist Peoples Party), exposed the increasing attacks of BJP particularly targeting muslim minorities. He also explained how the right wing forces conspired against the minorities in various parts of the country including Malegaon.

Comrade C Raju, the General Secretary of Makkal Adhikaram (People’s Power) greeted the conference and came down heavily on the Modi led BJP government for imposition of Hindi and Sanskrit on the people of Tamil Nadu and for its attempt to destroy Tamil language and culture.

All speakers unanimously expressed their support to 13 resolutions passed on the said theme in the open session of the conference and also assured to join every struggle on the said resolutions.

The delegates session on 26th began by hoisting the party’s flag and by paying homage to martyrs. Comrade Simpson, a veteran comrade, hoisted the flag. A 7-member presidium led by Comrade Chandramohan conducted the conference with full play of inner party democracy. Comrade Dipankar, the General Secretary, inaugurated the delegates session of the conference.The conference report presented by the secretary of the outgoing committee comprised of sections like the political situation and our tasks, work report, party building and work plan.

The political resolution emphasised on building a broad political coalition of people’s struggles against the increasing saffronisation and the increasing influence of RSS-BJP in Tamil Nadu. The report proposed a political tactics that was aimed at interaction and political cooperation with a wide spectrum of Left and democratic political forces including Ambedkarites, Periyarites and other democratic forces. The report called upon the party to work as a revolutionary opposition in the state. The report also categorically asserted to look for differences between the parties through the prism of anti-fascist resistance instead of any dogmatic approach and straight-jacketed formulae.

The section on party building and organisation noted the increasing space for inner party democracy and the resultant manifold growth of the party in last three years. The party has grown in 29 out of 38 districts and noted the addition of several new districts in the party’s map in the recent period. The report also identified the struggle against liberalism to be the key for party building. The report noted the ever increasing network of party organisation and also the development of deeper practice in several districts. The report also said that the aspects insisted by the campaign, “Reorganising the Party Work” campaign, shall be incorporated into regular party practice. The report called upon the entire party to make the organisation compatible with the task of building powerful anti-fascist resistance.

The conference resolved to intensify the people’s struggles in the coming days. It was decided to orgnaise district level rallies in mid-2023 and a state level mobilisation in early 2024. Student - youth organisations will hold a convention in December this year to seek opinions for an alternative education policy in the state from the academic community including teachers, academicians and students. Workers and agricultural labourers will hold propaganda marches covering the entire state. Women organisation will hold a convention against Manu Smriti.

The central observer of the conference and the Central Committee Member, Comrade Clifton D’ Rozario, conducted the election proceedings in a most democratic manner and a 47-member state committee, including five women comrades, was elected. Comrade NK Natarajan was re-elected as the state secretary.

Comrade Shankar V, in his speech, outlined the political and organisational tasks ahead in the coming days.

Comrade Dipankar in his concluding remarks called upon the entire party and the delegates to work towards building a bigger and a stronger party in the state which is the need of the hour to fight the fascist forces. He said that the ideological commitment, political clarity and organisational unity are the three important components to make the organisation and the party stronger to match the political tasks ahead.

1. UPDATE: Comrade Asaithambi has been elected as the new state secretary after the demise of Comrade NK Natarajan (see page 34.) 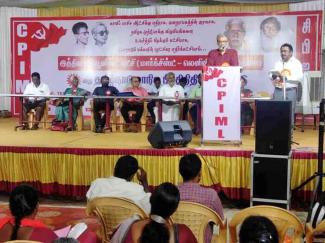