Joshimath, the last city on the borders of Uttarakhand is fighting for its existence. New cracks are emerging each day in roads and buildings across the city, making the place totally unsafe and possibly unlivable. A callous administration that has refused to pay attention to every wake-up call and alarming signs all these years is now desperately marking houses and hotels that need to be vacated immediately.

This is one disaster that has not come unannounced. It has been looming large for all who cared to see. For years Joshimath residents have been knocking on the doors of every institution of the state with frantic appeals to stop construction and reorient policies. The very name of their fighting platform - Joshimath Bachao Sangharsh Samiti (Save Joshimath Struggle Committee) - conveyed the degree of the threat felt by Joshimath residents and their urge to defend the place that generations had developed with so much labour, love and hope.

Way back in 1976, an 18-member committee, headed by MC Mishra, the then collector of Garhwal had alarmed the government that indiscriminate construction must be stopped to save Joshimath from sinking. Yet no government really paid much attention to this serious warning. The foundation of the state in 2000 was in fact treated as a licence to go for reckless construction of roads, dams and tunnels in the name of development and promotion of pilgrimage and tourism. Uttarakhand was branded as Urja Pradesh or the energy hub of India. The escalation of construction activities can be clearly assessed from this one figure: in 2000, at the time of notification of the state, Uttarakhand had a road network of 8,000 km and in two decades this has jumped fivefold to 40,000 km.

Periodically, government agencies have also warned the powers that be about the disastrous consequences of such ill-advised construction boom. In a report published in 2013, the National Institute of Disaster Management identified dam construction as a key reason for increasing flash floods - the region had recorded just four major flash floods between 1989 and 1999, the decade preceding the notification of the state and the number went up to 22 in the next ten years (2002-2012)! Most recently in February 2022, veteran environmentalist Ravi Chopra had quit as chairman of the High Powered Committee on the Char Dham Project terming the project an assault on the Himalayas.

The people of Joshimath have been protesting continuously against the disastrous Tapovan-Vishnugad power project ever since the proposal came to light twenty years ago. In the face of powerful local protests, the foundation stone had to be laid at Dehradun, 250 kms away from Joshimath. Strangely, the construction of the hydro power project was awarded to NTPC, the corporation that deals with thermal power. We know what happened in Gujarat when the contract of bridge repair was given to a watch-making company. Uttarakhand has been experiencing Morbi type disasters at regular intervals. In 2009 a tunnel boring machine got stuck in the tunnel and till date water continues to flow out of that tunnel. In February 2021 flash floods washed away the 13 MW Rishiganga Hydroelectric Project and sounded the death knell for the historic village Reni, the birthplace of the 1974 chipko movement that blazed a new trail by bringing the survival of environment and ecology at the centre of democracy and development.

It is a colossal irony of history that the state that played such a pioneering role in giving a powerful mass dimension to the environment movement has been taken over by forces that are drunk on power and greed. Using power to plunder nature for profit and suppress the voice of the people for sanity and justice has become the mantra of governance. When after the February 2021 disaster a group of petitioners comprising residents of Reni village and Comrade Atul Sati, leader of the Save Joshiath Struggle Committee and member of the Uttarakhand State Committee of CPI(ML) went to the High Court seeking an immediate halt to the Tapovan-Vishnugad and Rishiganga power projects and the Helang-Marwari bypass and rehabilitation of all disaster-affected people, the High Court dismissed the petition and levied fine on the petitioners calling them puppets of vested interests!

It should be noted that the High Court that showed such utter insensitivity to the plight of the disaster-affected people ordered immediate eviction of 4,000 families at Banbhoolpura of Haldwani by declaring them encroachers on railway land. Had the Supreme Court not stayed this cruel eviction order we would have by now seen the bulldozer brigade uproot some 50,000 people in the midst of a freezing winter. Banbhoolpura is predominantly Muslim while Joshimath is a sacred place for Hindu pilgrims, but the imminent disaster that threatens both these places is not ordained by any religion. It is the quintessential product of the corrupt rule of corporate greed, unbridled power and callous governance. Saving Joshimath and Banbhoolpura is actually an act of rescuing development and democracy from the trajectory of disasters. Let Uttarakhand give a fitting rebuff to the forces of corporate greed and autocratic governance and energise the battle for sustainable development and responsive democracy.

Protest Across Uttarakhand against govt. apathy towards Joshimath tragedy

On 19 January, statewide protest demonstrations were held across Uttarakhand on the call of CPIML in solidarity with the struggling people of Joshimath. Addressing the protest in Haldwani, CPIML State Secretary Raja Bahuguna said, 'Uttarakhand's historic Joshimath Nagar is undergoing an unprecedented crisis. First the state government ignored the crisis by and now it's trying to hide the truth by banning information like the recent ISRO data on land subsidence rate. The governments, both central and state are rather seem to be interested in sidelining the issue and are clearly not serious about the issue of rehabilitation of people of Joshimath. The crisis in Joshimath is the result of unplanned development pushed by the government. The government must be held responsible for the crisis.  "
CPIML has sent a memorandum to the government with the following demands: 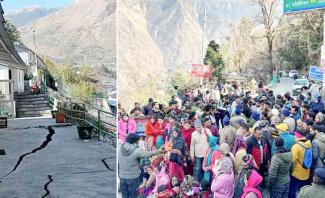