The CPIML Liberation condemns the incident of rioting on August 11, 2022 led by a feudal strongman in Hulihyder village of Koppal District in Karnataka. The incident resulted in the death of two persons, Pashavali and Yankappa Talwar, and grievous injury to Dharmajja, who is presently battling for his life. This unfortunate incident was avoidable had the District Administration and the police officers initiated appropriate, necessary and quick actions based on the repeated representations made by the Dalit and other communities in regard to the threats they were facing since the beginning of the month.

The violence broke out in the morning of August 11 near the Asar Khan masjid. A Muslim youth went near the bus stand to buy flowers, when he was assaulted by n handful of lumpen elements from the dominant community. The Muslim boy informed of this assault to others in the village, and concerned residents went to enquire as to why the youth was beaten up for no reason.

By this time, about 50 persons belonging to the dominant Nayak community led by lumpen elements, Pampapati and Yankappa Talawara had gathered along with a tractor full of stones, logs, iron rods and other dangerous weapons, who then launched an attack against the Muslim and Dalit community. In this violence two persons were killed - Pashavali (aged 26 years belonging to the Muslim community) and Yankappa Talavara (aged 55 years belonging to the Nayak community). Immediately after the violence broke out, an attempt was made to build a false narrative attributing the violence to an inter-faith marriage, but this claim stands completely debunked in the light of the facts.

After the incident of violence, the police, instead of arresting the real culprits filed false cases against CPIML Koppal District Secretary, and Karnataka State Commiittee member, Sannahanumantha and arrested him. Sannahanumantha had been in forefront in bringing the attention of the district administration and the police to the problems in Hulihyder village and sought for them to ensure peace and harmony. However, we are witnessing a concerted effort to vilify, persecute and victimise him by foisting false cases against him.

Hulihyder village in Kanakagiri taluk, Koppal district, Karnataka has been a key centre of feudal domination of Hanumesh Nayak belonging to the dominant Nayaka community. The economically weaker sections of the Nayaka community as also the other communities including Dalits, Muslims, Kurubas (OBC) and Lingayats (OBC) have been at the mercy of the feudal domination having no say in the functioning of the Gram Panchayat or any activities in the village.

The opposition to this was being built by Sanna Hanumathappa and other democratic persons in the village. He has been standing up for the rights and dignity of the oppressed sections of society and is vocal against the corruption within the gram panchayat. A few years ago an RTI activist Yallalinga Kuruba was murdered by Hanumesh Nayak and his close relative. This incident made state-wide news since the police initially passed it off as a suicide and it was only after Sannahanumantha along with other progressive and Dalit organisations to take up this issue that the police were compelled to arrest Hanumesh Nayak and his henchmen. At that time a massive protest of few thousand people was organised in the form of “Hulihyder chalo”. This had irked Hanumesh Nayak and other feudal elements of the Nayak community who have been targeting Sannahanumanthappa ever since. That Sannahanumanthappa belongs to the Dalit community and spearheading the fight against these feudal elements was the major factor.

Moreover, he was also targeted since he was also fighting corruption in gram panchayat and other departments, including the police. It is alleged that Hanumesh Nayak, who felt that Sannahanumantha was an obstruction, had planned to attack him on 11 August.

Over the past month the situation in the village was tense after some communities demanded that the statues of Buddha, Basavanna and Ambedkar should also be installed along with a proposed statue of Valmiki opposite the Gram Panchayat office. The district administration and police held two peace meetings to resolve this issue, but Hanumesh Nayak and his henchmen engaged in open threats against Sannahanumantha and others. CPIML demands that charges against Sannahanumantha and other innocent persons falsely implicated be dropped and they be immeditely released. The government must provide due compensation to the families of Pashavali and Yankappa Talwar who lost their lives in the incident. Further, CPIML demands that complete medical expenses for Dharmajja. who is battling for his life must be borne by the district administration.

The district administration should immediately form Peace Committee and restore normalcy in the village and a judicial inquiry must be conducted into the violence and the culprits must be brought to justice. 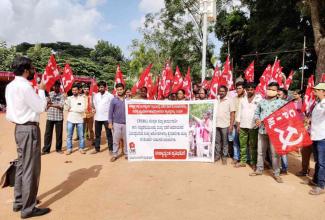