In May 2018, hundreds of local villagers had organised a march against the proposed expansion of the Sterlite’s Copper Smelter Plant in Tuticorin town of Tamil Nadu. They were protesting against the severe pollution from the plant in the region leading to catastrophic environmental pollution of ground water and the air. During the peaceful demonstration, the police opened fire on the protesters, killing 13 and injuring 102 people.

The brutal police violence led to widespread uproar and the government was forced to establish an enquiry commission headed by the retired Judge Aruna Jagadeesan. The commission submitted submitted a 3,000-page report to the government on May 18th, 2022. Though the report has not been made public yet, certain newspaper articles reported that the commission has found that the police fired on the protesters without any provocation or reports of mob violence.

CPIML Liberation has called upon the government to release the commission report and reiterated following demands:

1. Initiating action against 17 police officials, including the IG of South Zone, DIG and SP of Tirunelveli jurisdiction, as recommended by the Commission, is not sufficient. Hence, CPIML demands filing of murder charges, dismissal from service and immediate arrest of these officers.

2. The Commission has charged the District Collector of indifference and that equally applies to the then Chief Minister Edappadi Palanisamy also. Hence, the Collector Venkatesan should be dismissed from service and the then CM Edappadi should also be punished appropriately.

3. Murder charges shall also be framed against the owner of the corporate company, Sterlite (Vedanta Group), Anil Agarwal and be punished for using government and police officials like his own agents.

4. The Tahsildars and Deputy Tahsildars charged by the Commission shall also be charged with murder and be punished.

7. The state government should erect a memorial for those who were killed and should also institute an award for those who work for the betterment of the environment and ecology.

8. To top it all, the Sterlite factory in Tuticorin should be permanently closed and the properties be confiscated by the state government. The factories that damage / destroy the environment must not be given license / permission in future.

9. An Environment Mitigation Action Plan shall be prepared immediately to undo the damage caused to the environment, agricultural land, water sources, etc., by the factory, and compensation must be provided to all the families displaced by the said destruction as also the destitution caused to them due to environmental degradation and pollution by the company.

10. A high-level independent committee shall be appointed to assess the sufferings of people in terms of loss of lives due to chronic diseases like cancer, those living with chronic diseases, loss of livelihoods of agriculture and fisheries, and loss of wealth because of pollution due to the Sterlite plant. A case must be filed against Sterlite to compensate all losses sustained by the people over the last two decades.

11. All cases against protesters, including the cases pending in various courts, shall be withdrawn by the state government with immediate effect. 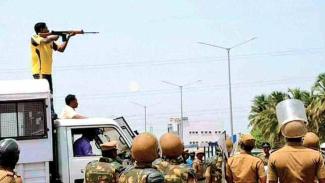