In the morning of August 13th 2022, a large number of Van Suraksha Samiti (Forest Protection Committee) members burned down the houses of Adivasi families in three tribal villages in Odisha’s Nabarangpur district. They also destroyed the maize crop by letting loose cows and buffaloes in the fields.

More than 100 families earn their livelihood by cultivating maize in about 30 acres of land in the villages of Kopasbhata, Sariabhata and Lakhtipakhana in Navrangpur districts. The Kondh tribal people, who reside in these villages have been cultivating in the forest area for a long time, and they have been demanding 10 acres of forest land for each of the 147 households as per the Forest Rights Act.

CPIML condemns this inhuman and unconstitutional act, and demands action against the guilty persons and proper assessment of damage and compensation for the 25 Adivasi families whose homes and crops have been destroyed. It’s a shame as the nation celebrates 75th year of independence, Adivasis are under constant threat of violence and eviction for pursuing their livelihood. 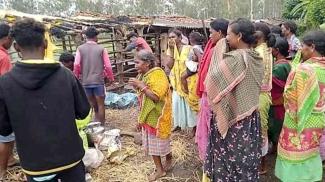