Skip to main content
Fact Finding 24 February 2022
Migrant Workers in Kerala – ‘Guests’ In Name, Yet Not Treated Even As Humans

(A fact-finding report by the Kerala unit of All India Lawyers Association for Justice AILAJ.)

The immediate aftermath of the incidents of reported violence by migrant workers at Kitex garments Kizhakkambalam, Ernakulam in the late night of 25th December 2021 was that criminal cases were registered against migrant workers and about 174 of them were arrested, with the media reporting screaming headlines such as “Kitex migrant workers in Kochi go berserk, attack cops”  and “Migrant labourers of Kitex wreak havoc in Ernakulam; several policemen injured” . Subsequently, several versions have emerged of what actually transpired on that night. What also emerged were reports of arrest of scores of migrant workers who had nothing to do with the incident, their difficulties in accessing legal representation and bail, and, the inhuman living and working conditions of the migrant workers in Kitex factory. In this situation, AILAJ – Kerala constituted a Team constituting of Advocates Jaykumar S. Theertham and Ubaidulla Farooq to visit to conduct a Fact Finding inquiry into the circumstances surrounding the events that transpired on the night of 25th December 2021, the social realities of the migrant workers and the status of their trial court proceedings.

The Team conducted its inquiry on 29.01.2022 by visiting Kitex garments factory to meet the other migrant workers and the management, and meeting with other concerned persons including Mr. George Mathew of Progressive Workers Organisation and Advocate B.A. Aloor who is representing several arrested migrant workers.

Cr. No. 1587/2021 alleges a crime at about 02.00 a.m. on 26th December 2021, and has been registered against “identifiable 100 persons” for offences punishable under sections 143, 144, 147, 148, 324, 326,307, 333, 353 r/w 149 of Indian Penal Code and section 3(1) of the Prevention of Damage to Public Property Act, 1984. The complainant is Inspector and SHO of Kunnathunadu Police Station. The allegation in the FIR is that the police received information that migrant workers of Kitex Garments Company were indulging in group clashes and hence the police went to the spot at about 00.30 early morning on 26th December 2021, where they found a group of armed people comprising about 100 workers of Kitex Garment Company who assaulted the police and destroyed the glass of the department vehicle.

Social conditions leading to the incidents

That migrant workers are a neglected section of the working class barely needs to be said. Indeed, it took the Coronavirus pandemic and the unplanned lockdown that exposed the social reality of migrant labour, those oppressed sections of rural India travelling to all parts of the country in search of survival wages. Their lives of precariousness marked by inhuman living conditions and oppressive working conditions with no job, wage or social security was laid bare for the country to see. To use Jan Breman’s classification, these workers comprised the  sub-proletariat, that largest group in the urban labour force, including not only casual and unskilled labourers but also those who are employed by small-scale enterprises, and the lack of dignity and stigma that they face makes them feel powerless.

Kerala has been using the nomenclature “guest workers” instead of migrant workers and the first known use is perhaps was the then finance minister F.M. Issac’s budget speech  in 2018 where it was said that workers from other states would be known as “guest workers” in government records. The Chief Minister Pinrayi Vijayan, and other government officials, made “atithi thozhilalikal” a common word during the lockdown.  However, as the Kitex situation has revealed, this change in nomenclature has not translated into a change in the social realities of the migrant workers.

The Team learnt this first-hand when they visited the Kitex factory and tried to meet the migrant workers. Kitex’s security personnel outrightly refused to allow the Team to meet and interact with the workers. The Team was told that they would allowed inside only on the “orders of Managing Director Sabu Jacob”, without which no one can enter and talk to the workers. In fact, since Team insisted on meeting with the workers, either inside the premises or outside, the security personnel grew belligerent and adamant. The Team, on the spot, drafted a letter to Managing Director Sabu Jacob highlighting these issues. Initially the security personal refused to accept this letter and instead directed the team to the HR managers, but the persistence of the Team paid off and they were compelled to receive and acknowledge the letter. While the Team was outside the factory, they chanced upon a migrant worker, who was petrified when they tried to speak to him and refused to say anything about the incident.
This locking up of migrant workers inside Kitex’s gates, refusal to allow the Team, or anyone else, to meet them, has to be seen together with the refusal of the management to secure legal assistance to the arrested workers or help them in any way at all.

According to reports, after the incident, the State Labour Commissioner, Smt. S. Chithra, led a team from the labour department and held an inquiry into the conditions of the labour camps inside Kitex factory. The report in regard to this inquiry is yet to be made public. However, from the visit of the Team, it is clear that the situation is alarming. 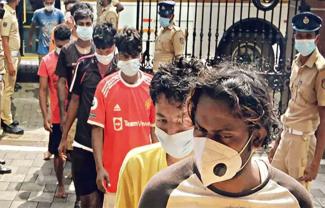