CPI(ML) Liberation condemns the bulldozing of the Karnataka Protection Of Right to Freedom of Religion Ordinance, 2022 by the BJP government in Karnataka. This law is brought in with a clear intent to criminalize and terrorize non-Hindu communities, particularly the Christian community. This comes on the heels of the organised attacks by Hindu supremacist organizations, with the backing of the BJP government, barging into churches/prayer halls and homes of Christians, physically assaulting them and even desecrating and vandalizing Churches/Prayer Halls.

The right to choose one’s faith is intrinsic to the right to life protected under the Constitution under Article 25, and the Ordinance is an attack on the fundamental right to privacy and the decisional autonomy of individuals to choose their own faith, and exercise their freedom of choice with respect to their faith. It must be remembered that Dr. B.R. Ambedkar himself championed the freedom to convert and had declared that he was born as a Hindu but would not die as Hindu.

There is a serious question of the propriety and legality in using the ordinance route. Ordinance-making power can be used by the executive to promulgate a law only when there is such urgency provided the legislature is not in session. Where is the urgency here? The Karnataka Protection Of Right to Freedom of Religion Bill, was introduced in the State Legislature in December 2021, but was not tabled in the State Legislative Council. Instead, the BJP Government has promulgated the ordinance in a clear blow to democracy and a fraud on the Constitution. The BJP government has taken every opportunity to undermine the Constitution and democratic decision-making, whether it was in the passing of the Farm Laws or even the Labour Codes. In state after state, BJP governments are using the law as an instrument to undermine the equal status of the Muslim and Christian communities. Indeed, the BJP has consistently exposed its commitment to its core Hindu majoritarian ideology than to the Constitution. Yet again the BJP government has subverted democratic institutions and parliamentary processes and sacrificed the Constitution promise of secularism and equality.

The Ordinance is blatantly unconstitutional and violates the secular fabric of the Constitution and violates the fundamental right to practice, profess and propagate religion protected under Article 25 of the Constitution and the right to privacy that forms an intrinsic part of the right to life protected under Article 21 of the Constitution. The criminalization of conversion by allurement, and its broad sweeping definition would include anything from talking about one’s religion, critiquing religious practices that are an affront to the Constitution, running educational institutions, to offering charitable work, employment, or social service and has been made with a clear intent to terrorize the marginalized community. By mandating that a person who wishes to convert give a declaration in advance and providing for the publicity to the same, and calling for objections from the general public allows for a clear trespass into the privacy of the individual and violates the freedom of conscience and privacy of an individual.

Between 2020 and 2021, Karnataka has witnessed an increase in 54% in atrocities committed against Dalits. The Ordinance by criminalizing the act of converting one’s religion will now be used to further target Dalits. The past year has seen state-sanctioned heightened communal attacks on Christians and Muslims by Hindu supremacist organizations. This is accompanied by systematic efforts at radicalizing youth and filling them with communal poison. Only last week, arms training was given by Bajrang Dal to young men at a school in Kodagu!

Prices of essential commodities are soaring sky-high, the economy is in a terrible mess and the overwhelming majority of Indians are worried about their jobs, livelihood, housing and other basic necessities of life. Neither the Modi nor Bommai governments offers any solution to this crisis, no relief to the people, all it does is to seek opportunity in crisis and inflict more injuries on the people.

Diversity and harmony are the two legs on which India can stand united and firm to weather any storm. Attack on these foundations is not just a blow to the religious rights of Minorities; it is an outright assault on the shared historical legacy and very spirit of India.

CPI(ML) Liberation demands that the Karnataka Protection Of Right To Freedom Of Religion Ordinance, 2022 be immediately withdrawn. We call upon the citizens of Karnataka to stand up to this fascist assault on the Constitution and society and give a fitting reply to the communal and corporate policies of the BJP and RSS. 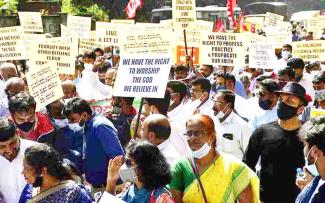